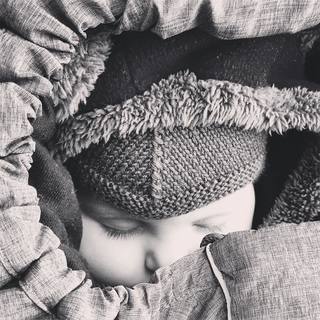 We barely remember what life was like without her. Until we do. And then we wish for the old ease. Time, energy, money, the ability to focus on and tend to one another. But then we hear her wake from a nap, and we both want to be the one to collect the grinning, nine-month-old babe from her crib.

I was asked if it's been worth it. This monumental change. This tectonic shift. The trials and tribulations of trying to change something that wasn't in need of changing by being crazy enough or foolish enough to stuff something else bigger and shaped differently inside of it. Was it worth it? The way no single thought will remain solidly in my mind; like undercooked spaghetti hurled at the wall, everything just bounces and flops disappointingly onto the kitchen tile.

She is worth it because she is here and full of exuberant, inspiring promise. And because there's just nothing else you can say about having a child once she's no longer a luxurious and naïve hypothetical.

She is worth it because she overwhelms us with joy at odd and surprisingly frequent moments. And because she looks exactly like both of us at the same time, even though that doesn't seem like it should be possible.

I don't know that I'll ever forget those first dark, chaotic weeks of her infancy , but maybe I will. I'm still not myself. Often I feel like I've ransomed my intellect and my emotional well-being just to have her.

Or at least that's what I'll say without thinking about it too hard. After all, anything less than reckless and total commitment to the cause of motherhood will get you branded as some very unfortunate things in this world.

And besides, I love to sing to her--Red River Valley tonight at bedtime--and I love to kiss her toes, and read her books, and brush her hair. I drop down on all fours in our dirty hallway to coax her forward in the rolling walker. I burn my fingers as I skin hot sweet potatoes to puree and I wipe her running nose again and again. The indiscriminate ma-ma-ma sounds she makes send my heart scampering in my chest, because soon she could say it to me and mean me all at the same time.

Won't that be something? Her Eve moment. Naming the things that walk, crawl, swim, and fly in her garden.

This is motherhood. Parenthood, actually, as Jonathan is now on papaperm three days a week.

We've put the ball in the air and we're moving downfield. Tomorrow we get the keys to our new home. It's all so adult, I can hardly stand it. And though we're exhausted, and though we sometimes question who we are, and though my self-esteem has been hobbled, and though our bathroom often smells like dirty diapers, we wouldn't trade that little girl away.

She tried to pinch a freckle right off my soft, fleshy forearm today--thinking it was just another small thing to be inspected and picked up--and I laughed through the smarting tears in my eyes, because that girl is the most precious, perfect little being in the universe. And we get to keep her for a while. Guide her, guard her. It's a privilege.

You couldn't pay me to have another, I don't think. (And Norway would!) But this little one, this Cheeks McGee, this Little P, this dancing baby... oh, we thank everything from God to our lucky stars for letting us be the ones who have her.

Perhaps, one day, my brain will unfracture; perhaps my hands will refind their places on the steering wheel of sanity. Until then, I'll be taking photos and videos of my giggling, squeaking, precocious girl child and hoping she'll look back on her life with us one day and decide it was all also worth it.