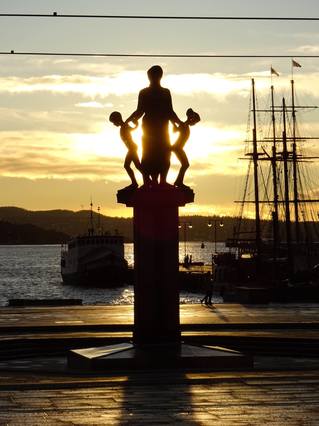 Just when I didn't think these acts of terror could be any less explicable, a mother leaves her six-month-old daughter to follow her husband on an errand of murder and suicide.

My daughter just turned seven months. She is a delight. Her eyes are incredibly blue. Her cheeks are as soft as whipped cream. She is strong, dexterous, curious, patient, determined. Her innocence abounds. The only way I could abandon her on the way to commit an act of violence would be to do it on her behalf. To throw myself in front of her. A mama bear. Walking through fire because it's the only way to secure her safety.

Maybe that's what this woman believed she was doing as she worked in her garage, fitting together the parts of a makeshift bomb. Or as she knelt to pray. Over and over again.

I feel ill at the thought of this woman, because new motherhood binds us. I don't want to be anything like her, but we are alike, simply because having a new baby requires a level of base, primal, survivalist thinking that is unique. I know how many diapers this woman has changed. I know how long she has stood on aching feet, holding a warm, wiggling, wailing bundle. I know she has sung lullabies and blown tummy raspberries and counted piggy toes and played peek-a-boo endlessly. And I can't sync any of those rituals--rooted as they are in tending to the future--with someone who sought violence on any level.

Then again, mothers are sometimes soldiers.

"Tell me this isn't the worst the world has ever been."

Yesterday, after the Hazelnut had been tucked into bed, I sat beside Jonathan and pleaded with him to help me sort these things through. The honey-sweet smell of our baby girl's freshly shampooed hair still clung to my nightshirt. "Tell me that we haven't brought her into the scariest time in history."

It took a few minutes of discussion before we agreed.

No. The world has always appeared to be on the verge of absolute disintegration. World Wars and Cold Wars. Epidemics and pandemics and plagues. Holocaust and genocide. Religious fanatics and witch burnings. Mankind has been attempting to annihilate itself for centuries. The rise of mass shootings in the United States and the rise of ISIS in the Middle East are only the latest in a long, sad, predictable string of avoidable catastrophes, and have replaced things beaten back by the better elements of our society (e.g. HIV/AIDS and other diseases, destruction of the world's rainforests).

This didn't cheer me up.

Since the November attacks in Paris, I've been sitting under an especially dark cloud. I still go out almost every day. I dutifully dress my baby girl in layers of wool and fleece, buckle her into her pram, pull a beanie low about my ears, and walk out the door. I remember where I was on 9/11, and I know that hiding at home and changing my personal prerogatives means the terrorists win. So, we go out.

Sleet melts in the gutters, and I move the way the Norwegians do on the colder days, leaned forward to avoid slipping on black ice between the painted white stripes in the crosswalk. The tree branches are bare and dripping with moisture in the perpetual shade of late-autumn this far north. Until recently, I have always felt safe in Oslo. Even after a Norwegian Christian man set off a bomb in front of the Labor Party's buildings downtown, then massacred almost 70 children on an island in the fjord, I have felt safe. But I'm losing my grip on that feeling.

A pair of cafés. A concert hall. A soccer stadium.

A shopping mall. A movie theater. An elementary school.

Today, Oslo's police force is armed. When we moved here, beat cops didn't carry guns, but that changed as terror threats against European cities began to rise. The government almost disarmed the police again recently, just days before Paris. Now I doubt my daughter will ever see the peaceful, optimistic city we once moved to. Rather, she'll grow up believing that all law enforcement officers must carry weapons because criminals are likewise armed, and she requires that level of protection.

Perhaps she'll be right, too, which is more depressing.

Good god, what do I tell her.

And who am I addressing when I say things like Good god ?

Politicians slink around and pay lip service and cower before the dismal and confounding fact of the NRA's power. Some of these politicians even claim to pray for an answer to tens of thousands of gun deaths. More than 330 mass shootings in 2015 alone. The Daily News ruffled some feathers today by declaring on its front page that God Isn't Fixing This. Which is true. It's not fixed. Some people think He can't, because He doesn't exist. Some think He won't, because He does exist, but He isn't involved in our everyday lives. Some think He can and will, and so they keep on praying. And some don't think about it at all, but toss out the sinfully easy hashtag with their morning coffee-and-status-update, as though that counts for something.

I did that after Paris, too.

And was almost immediately called upon to defend my position. As if that was what was important. As if superimposing the French flag over one's profile picture was somehow the thing that required even a fraction of our focus as a society.

When I pray for Paris the day after a murderous rampage committed by religious zealots, the irony of my gut reaction to turn my face heavenward isn't lost on me. But please don't mistake my faith for blindness and ignorance. I am burning with rage. I am quaking with fear. I am weighed down by the body count and the concern that this will inevitably happen again, possibly closer to home.

I don't believe prayer can change the way the world turns, nor can it stop the actions of people intent on doing harm. Prayer, at least for me, is entirely about self-examination. Reminding me of what is right and good, giving me time to consider what actions I can take to make the world around me a better place, to counteract the damage done by these few damaged human beings. It is a precious, necessary pause. It keeps me from going to war. It eases the bonds of my own selfishness.

Yesterday there was a slaughter. Today, my baby girl is a bundle of warm, milky purity and vulnerability in my arms. I breathe her. And I pray... It is in these quiet moments of contemplation that I can sort out my thoughts and fears, pluck the plank from my own eye, and move forward in life as a better human being than the ones who created this chaos. Stopping to think is the only way we reasonable people can win.

My head is buried in the sand. I dance around my kitchen with my daughter's cheek pressed to mine, singing along with Bing Crosby. I wile away hard-won naptimes watching Graham Norton interview Tom Hanks, looking forward to Toy Story 4. I purée sweet potatoes. I wiggle my toes in my new wool slippers. But none of this guards my heart enough from the pain of the world.

I snap at my husband. I grind my teeth when my daughter cries at bedtime. I withdraw my life from public consumption. I stop doing my work. I stop finding pleasure in reading. I scroll down the list of victims' names and ages and families mourning until I'm in tears again. I want to buy a gun. I want to bomb the living shit out of ISIS.

But my Quaker roots shiver in the ground and remind me what this primitive gut reaction accomplishes. Nothing. Except that I am drawn down to the level of my enemy by acknowledging them as my enemy. Look at history , I beg myself. Learn from it . I lower my weapons. I bow my head.

Oh give me a home where the buffalo roam, where the deer and the antelope play , I sing softly to my nursing child. The room is cozy and dark. Soon she'll be nestled in her sleep sac, and I'll whisper goodnight, but first we have this close moment and a lullaby. I sing to her about the prairie and Big Sky country, where seldom is heard a discouraging word. My subconscious must have picked this one. Wyoming was one of the few states that didn't see a mass shooting this year. Possibly because no one lives there. Either way, it's appealing.

There is no difference between the man who attacked people at Planned Parenthood in Colorado last week and the man and woman who attacked a party full of co-workers this week. That I'm sure of. It's one of the only things I'm sure of as my mind churns and churns in the wake of all these horrible things. Terrorists all.

And I'm afraid. Having a second, utterly vulnerable little heart beating beside me all the time makes me more aware of terror than I have been before. But I control my mind. I control my movements. I control what I say. I am still free.

I am afraid. And I refuse to blame any religion for the actions of any bloodthirsty wingnut. Islam or Christianity. And I refuse to silence my personal prayers because someone else thinks they're useless. (Though I agree that the hashtags are stupid, and will heretofore avoid jumping on bandwagons even to assuage my immediate feelings of distance and helplessness.) And I refuse to remain inside and barricade my door and limit my little girl's worldview. I am afraid. But I love people too much not to seek them out. I love life too much not to live it.

Where the hell is this god of mine? It'll be the first question I ask when we meet. I promise.