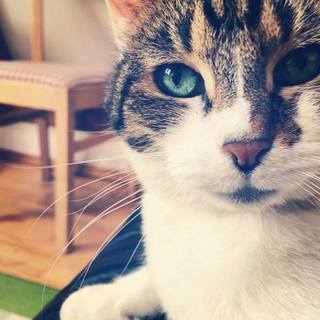 The hardest part is the stillness, the quiet. Though Crypto was a quiet kitty her whole life, walking about on dainty paws and only mewing when requesting (demanding) her dinner, there's an achingly quiet void in our apartment now. One shaped like a furry heart.

Yesterday, we said goodbye to her for the last time. Since November, her health had deteriorated rapidly. Mystifyingly. We tried prescription pills and a kitty inhaler for a sudden onset of feline asthma. Feeding her became an ordeal as we crushed steroids into her wet food, and had to watch her eat so that Disney didn't accidentally Mark McGwire himself. But over time, her breathing rattled and wheezed, worsening with each passing week. We could hear her from all over the flat.

Tragically, the labored breathing was worst when she purred. So, when we stroked her beautiful, silky coat or scratched her precious chin, she would close her eyes, lean into our hands, and wheeze until she gasped for breath.

Crypto was special. All people who have and adore their cats think this, of course, and that's only right. But Crypto really was.

Here is her story:

When Jonathan moved to his first apartment in Dublin, California in 1999, he bought a bunch of furniture (much of which, including a giant, black, leather reclining couch, we still own) and then went directly to the local pound to find himself a cat. He was a 22-year-old single guy with a good job and a flashy car, so rescuing an animal and giving it a home may not have seemed like the predictable next step, but that's the kind of guy he was (and is). At the pound, Jonathan met Crypto. She was bright-eyed and healthy, though she'd been found on the street. In the getting-to-know-you room, Crypto flirted and nuzzled his hands and purred. Jonathan signed the paperwork and took her home in a cardboard carrier. 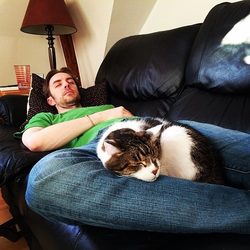 Following advice about bringing animals home to a new place, he put Crypto in the bathroom the first night, with food and a litter box. He closed the door behind him and looked forward to playing with her the next day.

The following morning, however, he opened the small bathroom's door and found nothing. No one. Confused, he looked behind the toilet and the litter box before finally pulling back the shower curtain. Thus revealed, Crypto narrowed her eyes and hissed loudly. She spent the next two weeks hiding behind a sofa in the main room, refusing to interact at all.

But then one day she was out. Walking around like she owned the place. She'd hop up on the couch beside Jonathan and let him pet her. Then she'd curl up on his bed at night and sleep with him. Love kicked in hard. Jonathan may have adopted Crypto, but the action was absolutely mutual. For the next fifteen years, that's all she wanted: to be with the man she loved. 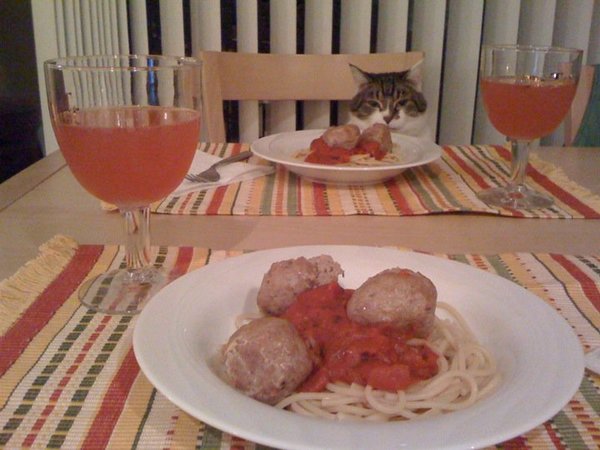 When they moved from the little apartment into a larger house across town with two roommates--Jeremy and Noel--Crypto was happy because a) Jonathan had the big master suite upstairs and shared it with her and b) the boys all fed her things she should not have been eating! Pizza crusts and bowls of chili would appear on the floor just for her. She became quite the chubby princess, reining over a kingdom of three young dudes.

She couldn't care less about me. I got zero affection from her when Jonathan and I were dating. That could have been due to my nixing of the chili-and-pizza habit, or it could have been the way I annexed Jonathan's attention for myself. When he and I married in 2004, Crypto was forced to accept that I was in her life for the long haul. 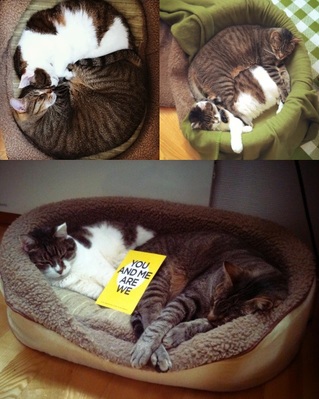 Still, she gave me nothing.

All purring and snuggling was reserved for her man. Put out, I decided to rescue a kitty of my own so that I'd have someone furry and purry to have and hold. Disney and I fell in love at first sight at the Dublin SPCA. He was a rambunctious, effervescent, curious kitten, and I knew he was perfect for me. But would he be perfect for Crypto?

We introduced them at our house in Livermore, and she gave him exactly the cold shoulder and no-nonsense hissing reception Jonathan had received almost five years prior. Disney was undaunted. Those first few weeks, he would seek her out and curl up beside her (almost on top of her!), ignoring any minor protest on her part, and he'd fall asleep, absolutely content. Sometimes she'd get up and walk away, but he managed to wear her down. We began finding them in the funniest wrapped-up poses imaginable. Yin and yang. Nose to nose. Back to back. Hugging. Face buried in tummy fur. And happy. Little brother and big sister. They remained this way for the next decade.

Crypto had quite a life. She lived with Jonathan (and then with Diz and me) in six different homes. In 2011, she moved to Norway with us, donning a fantastically chic pink-camo harness and flying across the Atlantic under the seat in front of Jonathan. Disney whined through half the trip, but Crypto (undoubtedly resigned to her fate) never made a sound. 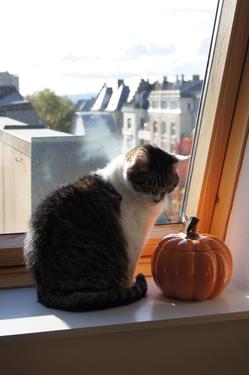 If you ask me, she was a happier cat after we moved to Norway. Our flat was small, but sunny, and full of great places to sprawl and nap. She'd grown to love me, too, after all those years. When she sought me out for snuggles and pets, even allowing me to pick her up and coo at her on my whim, I never forgot how long it had taken to earn that trust. Having me around all day most days, while I finished graduate school and worked from home, seemed to soothe her, too.

Most of our friends would immediately tell you how shy Crypto was. A major hider. For years, this skittishness around people seemed to be a holdover of her street-kitty time, before the pound. Before Jonathan and she found each other. But she became braver as she aged, and by the last year, she would trundle out into a room full of Jonathan's laughing, game-playing, beer-drinking co-workers. If she was hungry enough, that is. A few even got to pet her, and would tell you, I think, how special that was.

These are the things she liked best: 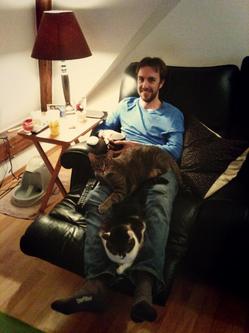 Yesterday, we said goodbye to Crypto. It was the single hardest, most painful thing either Jonathan or I have ever had to do. The tears come in dark, angry waves--sneaker waves, triggered by the sound of a can of cat food opening or the sight of her empty cat bed--and we're fighting them off together. Not everyone will understand what it's like to grieve an animal this way, but some will, and I'm grateful for that understanding.

The toughest part is the stillness. It's like we can just tell that one less heart is beating within these walls. Disney has wandered around a few times, poking into Crypto's favorite spots, then wanders out again. He doesn't understand any of this, and that kills me. Over the last week, though our tension and pain has definitely affected him, his behavior toward Crypto hasn't changed at all, except that he studied her when her breathing became especially loud and difficult. A few times he stepped up and licked the top of her head. They continued to nap together until the last. I'm so thankful that he's here. Pushing his strong, amiable little face between our upturned, grieving hands, willing us to love him. He's going to see us through this. Just by being our other perfect cat, our other favorite animal.

One minute, I'm breathless with the pain of not having her. The next, I'm steady and certain we did the right thing, picturing the awful way her abdominal muscles had begun to engage with every breath, pushing the air out of her swollen, weakened lungs. And then there's being witness to Jonathan's pain, even more acute than my own as she remained his cat, his special girl.

I know that it will get easier with time, that the only way to get through this kind of thing is to get through it. The last three months have been exhausting, agonizing, and it may be years before I can talk or write about making the actual decision to let her go. But already I can say it's also been a beautiful time. We were given the chance to appreciate Crypto. Extra snuggles, extra servings of tuna (when she had the appetite for it). We had the time to sit and call to mind all the good, early things, to look at pictures of her life, to prepare ourselves. We had the chance to say goodbye.

Farewell my dearest Crypto. Always by my side, always my companion in life. Thank you for 16 years of unconditional love. May your next journey be full of sunbeams, grasshoppers and bottomless bowls of tuna. 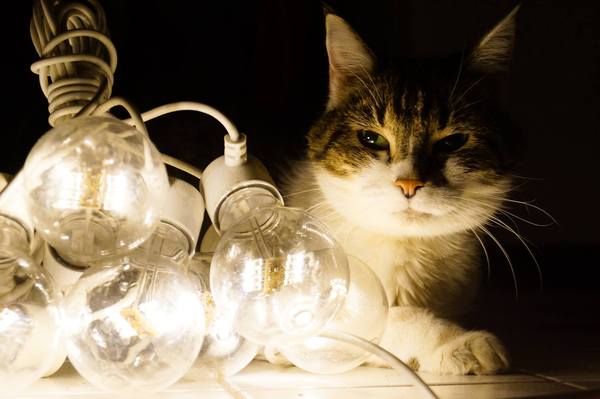