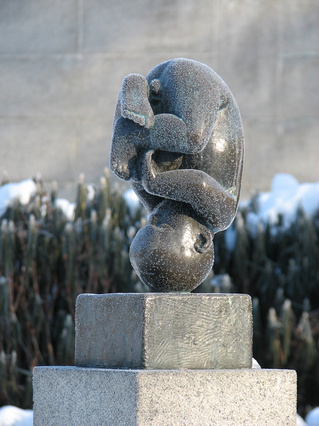 It's Mother's Day in Norway. My first. Before becoming pregnant, I think I would have raised an eyebrow at a first-time pregnant woman celebrating the day. After all, I haven't had to do any of the classic tough mom things yet. Staying up all night hanging onto a screaming infant. Changing diapers. Cutting grapes in half. Tending to scraped knees. Telling hard truths at the right times. Forgiving endlessly. You know, the stuff that deserves a whole month of gratitude set beside on an institutional level. (But sure, we'll take a single day. No biggie.)

So can I call myself a mom yet? For the last 30 weeks, I've been making a person. Fingernails. Eyelashes. Earlobes. Heart. Brain. Uvula. Pinky toes. It'll be 10 more weeks before she's in the world and separate from me and begins requiring the classic mom stuff. But I am getting prepared.

Yesterday, we went to Bærums Verk for a childbirth class. It's been a rough week for Jonathan and me, but this thing was on the calendar, and I thought it would be good for us to get out of the house and into the bracing winter air.

We spent four hours learning from a pair of Norwegian jordmødre (midwives) about childbirth. The phases of labor, the pain, the breathing, the impossible strength and flexibility of the vagina, the way a baby spins in the birth canal, the role of the husband in support of his laboring wife. We watched a film of a water birth. We watched a doll manipulated through a plastic model of the bones of a woman's pelvis. We heard that babies emerge facing the floor, but that in a very small number of births, the baby will arrive facing the ceiling.

Star-gazers , I thought. But it was an unnecessary correction. Here were two women, longtime midwives and advocates for mothers, leading an English-language class for foreign women in Norway and their partners. Their English may not have been perfect, but it more than sufficed for us, a collection of people from France, Italy, Portugal, South Africa, India, England, Pakistan, and the United States.

I took copious notes. Both because that's what a perpetual student does in anything that even resembles a "class," and because it helped to keep my mind centered on the task at hand.

"It is a myth that a woman may begin pushing immediately at ten centimeters dilation; the baby must also have arrived at the pelvic floor. This can take several hours."

I've experienced a few Braxton Hicks contractions recently. Never painful, just strange and rigid. They pass quickly. It's a reminder that, though I'm not yet nervous about the birth, it's still coming. Overwhelming and brutal and entirely outside my control.

Bærums Verk is an old ironworks town, situated around a powerful waterfall and river. Today, it's a collection of design stores and shops run by local artisans. After the class, as we walked back up the main street, the sun peeled through the hoarfrosted trees, forcing us to raise our hands up against it, shading our eyes. We paused on a bridge over the river, clouded by ice, and listened to the dull churn of the water. Jonathan squeezed my hand. Under my parka, I felt the Hazelnut spin once. Twice. The bridge shifted slightly beneath our feet as someone else crossed over. Two similar movements. Whether we can feel it today or not, our hearts are mending, and there is a huge joy on the horizon.

Recently, I've been thinking a lot about this exquisite Khalil Gibran observation on children and parenthood:

Your children are not your children.
They are the sons and daughters of Life's longing for itself.
They come through you but not from you, and though they are with you, yet they belong not to you.

You may give them your love but not your thoughts.
For they have their own thoughts.
You may house their bodies but not their souls, for their souls dwell in the house of tomorrow, which you cannot visit, not even in your dreams.

You may strive to be like them, but seek not to make them like you.
For life goes not backward nor tarries with yesterday.

The Hazelnut isn't ours. She's a pilgrim soul. She is her own. Our job is to make her, nurture her, protect her, and release her when she's ready to be released. This may happen sooner than we think. It may happen a little bit at a time. It may begin when labor does, in fact. That day, we'll hang onto each other and do what we must. Because we're parents. Already. And that's why I get to celebrate being a mother today.