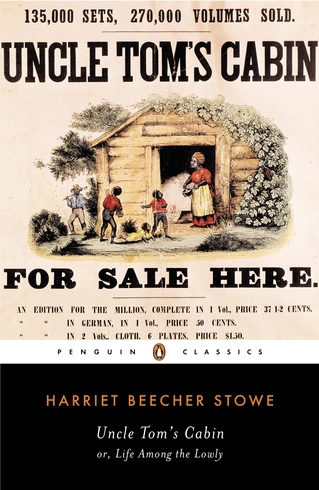 Here we have the sins of our forefathers laid bare and tied to the post for our review. Stowe demonstrates the visible gradient of slave owners and slaves alike--a sliding scale from the best to the worst--in 19th century America. But then, with a startling crack, she splits the façade of that gradient apart. It dissolves before the eyes of the reader. There is nothing relative about one man owning another, whether he treats his property with respect or abject cruelty. Nothing matters beyond the value of personal freedom.

There were those at the time who argued otherwise, and Stowe offers these denials and protestations alongside the rest, usually juxtaposed with a gut-wrenching illustration of human bondage. Even now it's tough to say what struck me hardest in the reading. Was it watching a woman's children torn from her grasp to be sold on an auction block? Was it the continuous breaking of promises from master to slave? Was it the cold-hearted trading of men and women done in parlors over coffee? Perhaps it was the subtle sounds of abolitionism and realizing that those on the side of "right" were once nothing but a weak, wavering minority in my home country.

While the prose is consistent, beautiful and compelling, I found the latter half of the book preachy to the extreme, so moralistic that it began to sound like harping. This is unquestionably a Christian tome. But it is a testament to the power of religion, not only because the book swayed hearts and minds, but because of what the author writes in her final chapters about the incredible faithfulness of those slaves who believed in God, as well. Some of the battered, sunken, deprived masses of African slaves in the United States--numbering over the course of history into the millions--found a reason to pray and sing and praise and hope. On top of this, Stowe illustrates the irony of such profound faithfulness in a society where Christianity was used to justify the necessity and even the righteousness of slavery.

Slavery is a blight upon American history, and this book (along with Frederick Douglass's Slave Narratives and Solomon Northrup's 12 Years a Slave) should be required reading for every citizen, precisely because there are still some people who don't want to read it. They are squeamish and indignant. They believe racism no longer exists. They want to forget it all happened.

Which, on second thought, is what was most difficult about this book. The stories of Uncle Tom, Eliza, and George are fictionalized accounts of people who actually existed. Compiled to form a narrative, names and dates adjusted for continuity, but otherwise real. What of those real men, women, and children? What of the millions whose stories were never told? If anything is made brutally clear in this book, it is that the subjugation of a population lays waste to its history. Slave owners in America did worse than own and abuse the living: they rendered their slaves nameless, voiceless, detached from time and place, and buried everything in the backyard. Then left bootprints on the unmarked graves.

It is the overwhelming size of what has been intentionally forgotten that breaks my heart.

Read this fine piece of 19th century literature, and in reading know that racism will never be extinguished in America. The roots of it are far too deep and far too much the fault of the men and women who founded our country. And if you believe you are blameless, having been born almost 150 years after Uncle Tom's Cabin was published, think again. Every time you subconsciously take some small credit for the good in our history--the pride you feel in the Declaration of Independence, for example--you must take an equal bit of the blame. Many of the men who signed that illustrious document were at their leisure to pave the way of a young America because they had slaves to work their land and make their money. You may hold your chin high on the Fourth of July, but you can't claim the ink of that revolutionary quill without getting some of the blood on your hands, as well.

View all my reviews