I'm thirty-one. It's not one of those big ticket ages that everyone looks forward to. Thirteen, sixteen, eighteen, twenty-one, twenty-five... I enjoyed them all. Thirty should have been a big year for celebrations, but as those who are close to me might recall, turning thirty knocked the wind out of me. I wasn't ready to be in my thirties. Not really. I felt like a huge faker. In the same way that it took me a year or two to realize that getting married didn't automatically qualify one for adulthood (that it should be the other way around, if anything), I needed roughly 11 months to adjust to the idea that thirty-year-old me wasn't different from twenty-nine-year-old me, and didn't need to be. Age is just a number. And birthdays are just an excuse to throw a party.

So, this year, we did. Thirty-one-year-old me and thirty-seven-year-old Zoë, my writing buddy and movie soul mate. We had a kostyme fest (costume party) with a Hollywood theme. After all, if there's any activity which disproves the myth of an age/maturity congruence, it's playing dress-up. My costume (and my honey's costume) were inspired by one of my favorite movies of all time.

I found the perfect dress at a shop just down the street. Thankfully, it's one I plan to wear again and again! But it took a few weeks to pull together and modify the necessary props and accessories.

I found a DIY tutorial for Audrey Hepburn's Givenchy lace mask , but I didn't want to be bothered with cutting and edging raw lace. Instead, I found a broad trim and simply cut the length I needed, then hand-sewed another trim to the top and sides to help it hold its shape.

Our Cellini Venus was probably the toughest prop to match. We found lots of statues online that could have worked, but the cost of shipping to Norway was prohibitive. Instead, we bought one of two gold plastic Oscar-like statues at our local costume shop in Oslo and painted her white. My antique pistol was a children's toy, a pirate pistol which reads Kaptein Sabeltann (a Norwegian children's character) on one side.

Basically, my whole life has been building toward the wearing of this costume. Trust me, you want to watch this movie. It's the most romantic, sweet, and funny art heist flick of all time.

There were lots of other fantastic costumes at our party, of course. Stars galore!

Zoë went as Scarlet O'Hara. (Specifically, BBQ Scarlet: "Now isn't this better than a table? A girl hasn't got but two sides to her at a table.") Her man, Christer, was an unbelievably believable Groucho Marx. 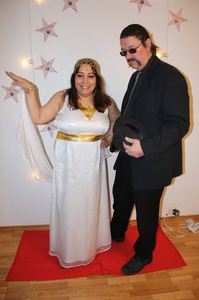 We had Captain Jack Sparrow and Elizabeth Swan, Mary Poppins, Gatsby & Daisy, a couple of Cleopatras and a Joker. But, most importantly, we had cake and wine and music and love. This was a party I would have enjoyed at any age. Here's to never growing all the way up!