Last weekend, the road rose up to meet me! My flash fiction story "Roots" received the Irrgrønn Flash Fiction Award , and my win was announced at the Irrgrønn Festival of Contemporary Irish Literature .

Even on an ordinary day, there's nothing I like better than hanging around Oslo's Litteraturhuset . In past years, I've watched many wonderful authors read and speak there. From Ali Smith to Anna Funder to Jennifer Egan to John Irving. But I can confirm that it's even cooler to be the person standing on stage reading to the crowd.

My hat is off to festival organizers, Claire Mc Aree and Dr. Sam McManus. We heard from an impressive lineup of Irish authors, including Aifric Campbell, Belinda Mc Keon, Paul Lynch, Donal Ryan, John Kelly, Eimear Mc Bride and Anne Enright. Kjersti Skomsvold also joined them onstage, and it was a treat to hear a Norwegian author speak about her work in English.

I first heard about the flash fiction competition only a week before the deadline. Included above the prompt on the festival website was this definition from Richard Ford :

"A flash has about 500 words and is part poem, part story. Plot is not as crucial as atmosphere and significant detail, and for me language is paramount. Though short on words, the flash story is long on depth and should sting like good poetry. Punchy, succinct and surprising, the best flash will shift the reader's heart but also keep it beating hard."

This appealed to me. Paring something beautiful down to less than 500 poignant words seemed like a perfect challenge. I selected a short piece of nonfiction from my master's thesis and began revisions as a fiction writer and a poet.

If you're looking for the moral of this story:

It's practice. I took a flash fiction course as part of my master's at Lesley University. As a result, I read and wrote quite a bit of flash for a semester. I'm also a long-time blogger, which is an exercise in the short form.

And perseverance. The story I submitted had been thoroughly revised, rewritten even. But first, it was rejected by multiple literary magazines. Even in the face of all that negativity ("We admire your writing style, but this piece isn't quite right for us."), I knew the story was special.

And luck. I only enter no-fee contests. Had Irrgrønn required a fee, I wouldn't have entered. 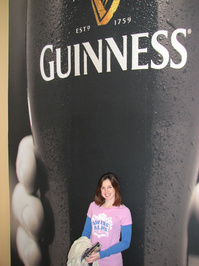 It was an honor to hear my name called on the opening night of the festival. They had given me advance warning, so I did my hair and scrubbed up. But they also asked me to keep it a big secret until the reveal, a difficult task because I was bubbling over with excitement. Worth it, though, to hear my friends and fellow members of the Oslo Writers' League cheer for me. Even though many of them had submitted pieces to the competition, as well. A win for one of us is a win for all of us.

And the prize is a weekend trip for two to Dublin, Ireland.

Of course, the lucky guy coming with me is my first reader, my biggest fan, my travel buddy, and my true love. It's been five years since our last trip to Dublin , so we're excited to go back. What are the odds we'll get some blue skies over the emerald isle in June?

Left: Me being young and cute at the Guinness brewery in Dublin. Below: We snagged an incredible last-minute deal on a roundtrip flight to Dublin from SFO. Crazy jet-lagged, we were still jazzed to pose in front of our Aer Lingus flight on that March day in 2009. 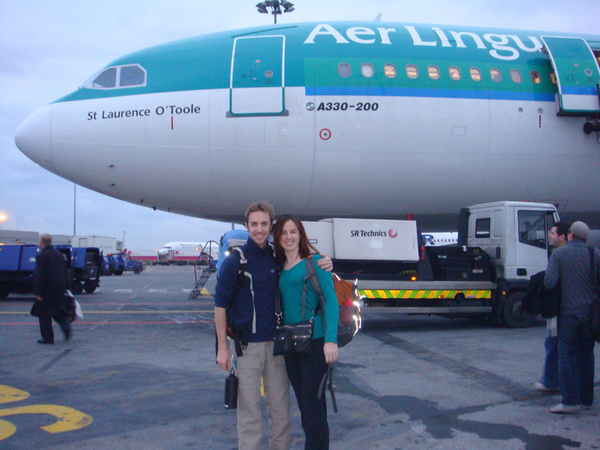