When Dad got his first job teaching at Sinnott Elementary School, he made an executive decision and transferred all three of us kids to the school, as well. Even though this meant taking us away from all our lifelong friends, and even though it would put us through a 45-minute commute each way, and even though we had to be at school super early and stay late with him. (Can you tell I have some unresolved feelings about this? Haha!)

Anyway, he employed us to assist with his first classroom set-up before the school year began. I was in sixth grade at the time, so he felt I was responsible enough to go to the printer room and use the copiers without supervision. When I entered the room for the first time, I saw a banner strung up above the row of big printers which read: Here's Audrey!

I thought it might be some kind of surprise for me! Got excited. Ran back and asked Dad about it. He shook his head, confused, and waved me off, too busy to play detective. Disappointed I went back to make my copies. The banner still made me smile, though. Some kind of secret between me and... who? An admirer? A generous benefactor? My real parents? (Because, obviously, I'd been adopted by martians.)

The next day I visited the front office to ask a question of one of the admins. They were deep in conversation, so I had to wait my turn.

"Barb, did you put up that sign in the copy room?!"

"Hah! Of course. It's perfect don't you think?"

"It serves them right for sending us that horrible monster of a printer."

Another woman overheard them talking and asked the question running around in my head, too. "But why did you call the printer Audrey?"

"Haven't you ever seen Little Shop of Horrors?"

The woman shook her head. I nodded, but no one was paying any attention to me. Spending the night at a friend's house when I was in second grade, we'd sneaked down the stairs and crept up behind the couch where his dad had fallen asleep watching a movie on one of the cable channels. It all came screaming back to me... the dentist's chair, the writhing shadows, the enormous, bloody-tongued bloom.

"It's what they name the giant, man-eating flower in the movie. You know? Like that big, ugly Carcass Flower--"

"Right. Corpse Flower. It blooms every couple of years. The biggest bloom on earth! And it smells like a rotting, dead body!" 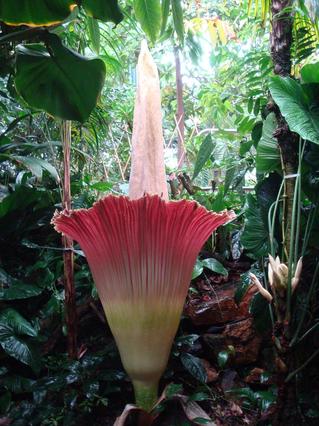 I backed out of the room, eternally grateful that neither of my brothers had witnessed the conversation. Man, they would have had a field day with that one. The one time Ted asked me if I knew why the banner was hanging there, I started to shake my head, but thought better of it. If I didn't answer him, he'd run off and ask someone else. Barb, probably. And get the truth. And start calling me horrid names and pretending to plug his nose whenever I walked by. I had a better idea.

"It's just a name," I lied. "You know how they name ships and stuff after girls? Well, this printer is a big, important piece of equipment. Sort of like a ship. So they named it a girl's name."


I rolled my eyes and turned back to my work, saying over my shoulder, "Anyway, I think that's why."

The I think was a calculated move. Whenever I sounded too much like a know-it-all, Ted would try to prove me wrong. I'd learned that, if I offered a hint of humility, the fact sounded legitimate. As though I'd once been in the dark myself, had asked the question, had remembered the answer, but only sort of. It was enough for Ted.

Looking back, I wonder if this auspicious start to a new year at a new school worked on my subconscious, too. Sixth grade was the same year I began signing my name as Elizabeth Bennett at the tops of my papers. My dear sixth grade teacher never even acknowledged the quirk. She knew it was me, and let me work through that phase on my own terms.

Years passed. The original Audrey banner fell down. It was replaced when a new beast of a printer arrived. Audrey II. By then, though, my name and I had made our peace, and whenever an "Audrey flower" makes the news , I can't help but smile.