"Mother said you could always tell a lady by her hands." ~ Suellen O'Hara, Gone With the Wind

And I've got dirt under my fingernails. Not only is this an odd sensation, but it makes me feel even less "kempt" than usual. What's the good news? My rose, the one whose existence and survival I chronicled yesterday , is now happily rooted in its new home. And I took the opportunity to release some of my excess creative energy (pent up inside for many months now as I've been unable to scrapbook for almost a year and a half!).

As everyone knows, Oslo is one of the most expensive cities in the world. This morning, I paid 36 NOK for a glass bottle of Coke. At the current exchange rate, that's more than $6.00. And I didn't even blink. Because I've been assimilated. If I want a Coke, I pay for the Coke. Fortunately, I'm more frugal when it comes to one-time purchases that aren't exactly "necessary." In that category are things like flowerpots. My track record with flowers doesn't rate a pretty, sturdy, earthenware pot. Instead, I picked up the cheapest brown, plastic pot and saucer I could get.

And it looked like the cheapest brown, plastic pot and saucer I could get, too.

So, I upcycled my flowerpot! All it took was patience, a Sharpie, a favorite book, and a steady hand. 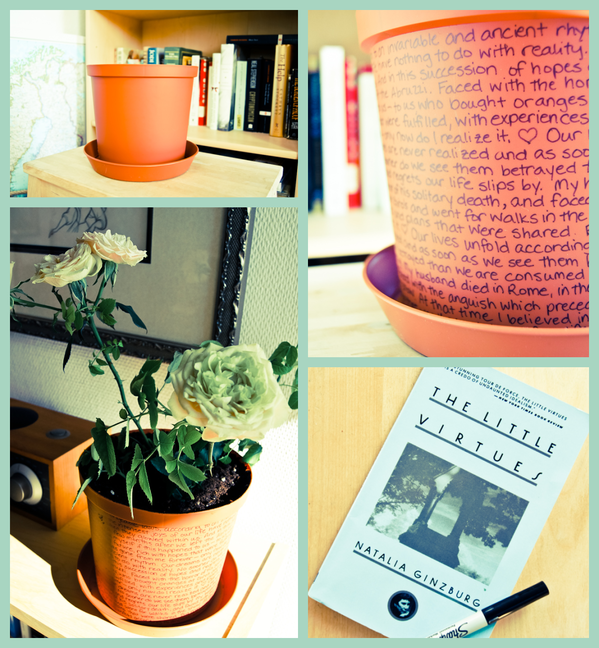 Step One : Pick up a cheap, plastic flowerpot. One that, if screwed up substantially in the process, you will not regret tossing off, or turning into a new project instead .

Step Three : Turn on the TV. No, really. This is going to take a while. Queue up a movie or TV show you've seen a zillion times (because you won't be able to watch it with your eyes!). My personal preference was Season 4 of Gilmore Girls.

Step Four : Take the Sharpie (mine had a fine-point... using a regular Sharpie would make this process faster, but probably wouldn't look as clean) and begin.

Step Five : Write around the pot, one line at a time. When you come full circle, drop down to the second line and begin again. My quote was long enough that I only repeated it four and a half times. If you pick a long enough passage, you won't have to repeat it at all. Take your time.

My quote, from Natalia Ginzburg's essay Winter in Abruzzi :

"Our lives unfold according to ancient, unchangeable laws, according to an invariable and ancient rhythm. Our dreams are never realized and as soon as we see them betrayed we realize that the intensest joys of our life have nothing to do with reality. No sooner do we see them betrayed than we are consumed with regret for the time they glowed within us. And in this succession of hopes and regrets our life slips by. My husband died in Rome, in the prison of Regina Coeli, a few months after we left the Abruzzi. Faced with the horror of his solitary death, and faced with the anguish which preceded his death, I asked myself if this happened to us--to us, who bought oranges at Giro's and went for walks in the snow. At that time I believed in a simple and happy future, rich with hopes that were fulfilled, with experiences and plans that were shared. But that was the best time of my life, and only now that it is gone from me forever--only now do I realize it."

It's a reminder that these days, the ones I live right now, are the best of my life. I need to hold my husband tight, so that his heartbeat exists in the palm of my hand, and actively cherish what he brings to me. Laughter. Adventure. Wisdom. Play. And a year from now, I need to remember to feel the exact same way, no matter where we're living or what we're doing then. The present is the best, and I don't want to miss it, nor do I want to hurry it away in favor of the future.

Perhaps this is why I haven't yet washed the dirt from under my fingernails.