Like bouldering, but on buildings. It's one of the many things we tried this summer, if briefly.

My best friend and Ya-Ya, Amy, visited us in Oslo with her husband, Jeff, at the beginning of June. We did a bunch of fun stuff together. I loved playing tour guide in my city!

One of the best things about Ames and Jeff is their spontaneity. We're spontaneous people, too, so the four of us have a very special brand of fun. On their last night, Jeff took us running out the door, down the stairs, into the street, and down a block to the local French school. There, we set about climbing the large retaining wall that runs the length of the playground. I'm so happy I grabbed the camera while everyone else was collecting their climbing shoes and chalk bags. 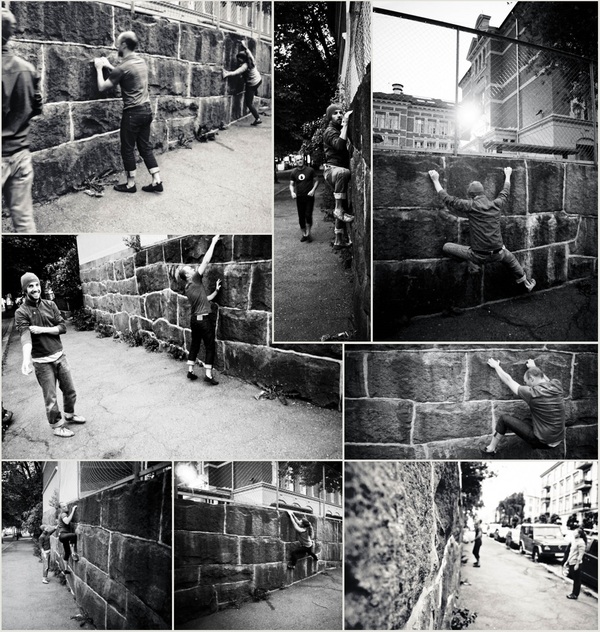 Eventually, Jonathan and Jeff pieced together a pretty nifty traverse from one end of the wall to the other. As they "worked," several people wandered by us in the street. One stopped to take an iPhone photo of the crazy Americans on the wall. Another asked where we were from and, as he walked away, called back over his shoulder, "Rest in peace, California!" (We're reasonably sure he meant "Take it easy," but it's the thought that counts.)

When Ames and Jeff boarded the train back to the airport the next day, I'll admit I cried a little. There are few people in this world who know me the way Amy does. She is a piece of home; and she'd brought that feeling all the way across a world to me. And while I may have been instrumental in showing them the nooks and crannies of Oslo, building memories they will carry with them the rest of their lives, they also gave a gift back to me: I will never see the schoolyard walls in my neighborhood the same way ever again. Walking the few blocks to the market or the post office or Solli plass will always be a little more special because that wall holds a secret route, one navigated by fingers and toes, and has held the chalk echoes of our movements alone.