There is a meme that has made the obligatory number of rounds on the interwebs and is now lodged, probably forever, in my life. This is Why I’ll Never be an Adult on the wonderful and hilarious blog Hyperbole and A Half . It is the story of one woman’s personal history of productivity, the ups and downs. And, as with so many great and simple stories, this one is illustrated with zany stick figures.

The thesis to all this, of course, is that the definition of an Adult is a person whose capacity for responsibility is rarely, if ever, overwhelmed by the petty rigors of daily life. You know the ones. Chores. Errands. Getting one’s child (or husband, in my case) to eat his vegetables. Working at a job that earns one money. Hitting the gym. As well, an Adult is someone who manages to fend off the temptations of sloth and gluttony, even in this world of Double Stuft Oreos and Project Runway.

The punchline is that an Adult manages to do all these things in a day, as well as to CLEAN ALL THE THINGS! Exquisite hyperbole. And the bonus punchline is that wannabe-Adults can't maintain this level of responsible productivity for longer than a couple of days. Then we breakdown, forsake all other goals, and succumb to the lazy-brained pull of the Internet. Forever. It's a cycle; one I've been churning through for years and years.

And, like any other average twenty-nine-year-old woman, I’d love to break the cycle and cross off Adulthood on my list of achievements.

So far, I haven’t. Not that my list remains impossibly long. I’ve crossed off other important milestones like Master’s Degree, Living Abroad, and Reach Eighth Year of Marriage. Not to mention the lesser goals, like Master Pumpkin Bread Recipe, Watch Every Episode of Friends 19 Times, and Defeat Gag Reflex When Scooping Kitty Litter. You see? Progress.

But Adulthood is still waiting in the wings.

Today I did all kinds of good things on my climb up that ladder. I woke up and got dressed like any other working person. I sat at a favorite café for two hours, writing and revising an assigned book review. Then I went to the grocery store and procured adult-type things: cat food, a bag of nectarines, broccoli and cauliflower. And before heading home, I overcame my fear of looking like a black-thumbed idiot, walked into the florist shop and asked for help. 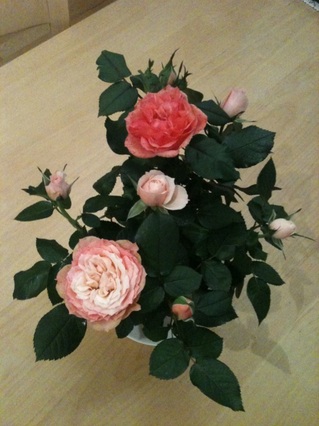 You see, in late July, Jonathan brought home flowers for me. He does that every once in a while. And in spite of the fact that I’ve long asked him to choose cut flowers over potted ones (so that the inevitable wilting and death aren’t my fault), he ignored that, and arrived at the front door with a small, potted, pink rose bush. More than that, in his other hand swung a medium-sized watering can in the same shade of pink as the plastic flamingos on any true redneck’s lawn.

I accepted both with a combination smile-grimace that would’ve made Lon Chaney proud, set the rose on the table and the watering can on a bookshelf. Sure , I thought. I’ll totally water the darn plant now. That’s realistic.

But each day thereafter, as I went about my business, my eye would land, not on the quivering, vulnerable, thirsty rose, but on the bright, pink watering can. And I would walk to it as though in a trance, lift if carefully (heavy, it was, for Jonathan had even filled it with water that first day), and tip it toward the blooms, leaves, and thorns in the small, brown-plastic pot on the table. The pot would brim with water, then absorb it. The rose would sigh (or maybe that was me), and I’d replace the can and go back to my regularly scheduled non-botanist programming.

After a few days, the first blooms began to brown and nod off. The nodding was familiar. The droop of death. A few of the leaves darkened and tightened dryly, too. Water pooled under the pot, unused.

I shrugged. You can take a rose to water, but you can’t make him drink , I thought. This would be another failed attempt in a long line of failed attempts.

Then I thought of the scissors. Cut off the sick limbs. Pluck the dead leaves. Perhaps you can save one stalk or two. I’m not sure where I learned this, though it must have been from my mother. She’s the kind of woman you’d expect to own gray-leather gardening gloves with sweetly-soiled palms. She knows her way around a pair of curved shears. She takes pictures of her flowers and posts them on Facebook. It’s one of the places where her patience and determination really pays off. But I’ve never once taken a lesson, on my knees in the dirt. Anything I “know” about the process of “gardening” now is the product of osmosis, or wishful thinking on Mom’s part. It’s the only way she could get me to play with flowers; it’s the only way she could get me to, one day, care about cooking. Wish. Pray. Forward recipes via email. "No. Really. This one is EASY."

Within minutes I’d trimmed down the rose plant. Only one bloom remained, bouncing on a stem that barely seemed sturdy enough to hold it. The rest were cut back to nothing. I nodded. Seemed good. We’d see.

The lopped-off ends of former roses turned black. The soil remained listless. The last bloom began to fade. Ruefully, I cut back my watering schedule to once every-other-day. The term overwatering popped into my head around bedtime. Was it a real term? Was I making that up? Was Mom chanting it somewhere at a little doll shaped like me?

At first I didn’t believe it. Almost overnight, new tendrils of stem and leaf had unfurled from the dark soil and were reaching for the sky. The real sky. (I’d moved the pot closer to the back door where it would receive some direct sunlight in the afternoon. Another term had returned to me: photosynthesis .) And then, a few days after that, a long-nosed, smooth-skinned bud appeared. Everything new was a shade of green so lively and earnest I can’t describe it. Optimistic green.

Standing in the middle of the florist’s shop, I looked for the employee with the kindest face. She was short, stout, and bespectacled. Her haircut made her look like Ginnifer Goodwin. With a dainty silver nose ring piercing her septum.

She helped me pick out a larger plastic pot and a dish to set beneath it to collect water.

“But don’t overwater it,” she warned.

She hoisted their smallest bag of soil, 10 kgs, and grabbed a packet of soil nutrients to add before repotting.

“It can be tough on the roots to move from one pot to another,” she said.

“Transition is hard,” I agreed.

I fed my cats, put my groceries away, and went back to work. I finished the book review. I wrote a complex and necessary email to a friend. Then a guest blog for The Zesty Digest on gender discrimination in product pricing (don’t worry, it’s more fun than it sounds). Then did my web consulting work, finishing almost in time for Jonathan to come home. Together we whipped up a dinner of spicy Thai chicken soup. He refused to eat his broccoli.

Adult fail. For us both.

But in a few minutes I will approach my rose, with its last fading, mature bloom and its score of optimistic green sprouts. I will prepare the new pot with soil and fertilizer. I will lift the plant free of its previous confines, ever so gently, and tuck her into this new home. A bigger place. A better place. Somewhere to really come into its own.

And thus will end my super-productive day, on a high and very Adult note. The real test will be if I can do it all over again tomorrow.