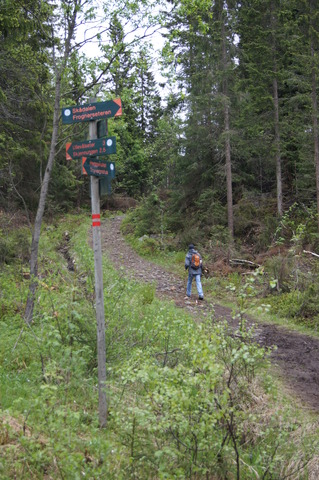 Karl Johans Gate runs straight downhill from the gates of Oslo's royal palace to the parliamentary buildings (Stortinget), and continues down to the city's main train station (Oslo Sentralstasjon). From the palace hill one can see the tops of buildings and trees, red flags, neon signs, streetlamps. But beyond all of that is the verdant rise of Ekeberg Park and the rest of Oslofjord's eastern bank. As Jonathan and I walked through the palace grounds and surveyed the city, it was that grassy, forested hill which caught my husband's eye.

"This is why Oslo is the perfect city for us," he said. "We can be right in the heart of town and still see the natural world."

He's right. This is what works for us. I like the buzz and color of city living, the knowledge that great restaurants and world class opera and authentic kababs and high fashion all exist within a few blocks of me. Jonathan must, at all times, be able to hear and heed the call of the wild. Oslo, in her generosity, provides us with both.

For example, last weekend we wanted to get out for a hike. The weather forecast included rain, but the frantic gleam in Jonathan's eye kept me from pleading my case to remain dry. Rather, we grabbed the Gore-Tex and hurried to the tram stop. We took our corner tram (19) to Majorstuen where we hopped on the Metro (T-Bane 1) to Frognerseteren. The half-hour train ride took us up into the hills at the northern end of the city.

Frognerseteren is the last stop on the line, and a number of hiking trails branch out from the train platform. These trails double as cross-country ski trails in the wintertime. We disembarked and headed downhill a short way to the Frognerseteren Restaurant. Housed in a hulking dark wood building constructed in 1892, it includes a cafeteria style section for people dropping in along with a fine dining area open for dinner. It's hard to miss the restaurant in all its ferocious grandeur. Traditional Viking carvings of leering dragon heads sprout from the eaves. We had occasion to enjoy a pint of beer ( ø l) soon after our arrival in Norway this April; it's well worth the short trip, both for the delicious baked goods and the vibrant panoramic view of Oslo far below.

But our motivations last weekend were much different. After some cursory research, Jonathan had selected a hiking trail from Frognerseteren down to the lake at Sognsvann. The 7 km (4.3 mi) hike would be mostly downhill. And, best of all, we'd be able to take the Metro from the station at Sognsvann back down into Oslo at the end of it. 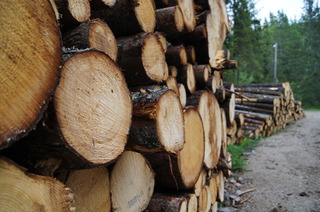 The trail was wide and well-marked in traditional Norwegian style (red and blue painted signs at intervals). It began as a dirt road, slightly hilly. The sun blazed down through the scattered clouds. We passed several other hiking groups, all headed the opposite direction we were. Some rode mountain bikes, some walked dogs. A couple walked by in shorts and tanks, and threw us a slightly pitying look. In our heavy Gore-Tex, wool socks, and boots, we definitely felt overdressed.

At a crossroads, we came upon a long pile of stacked logs. The indicator on Jonathan's GPS alerted him to a nearby geocache, so he began hunting in the forest around the clearing while I snapped pictures of the yellow cross sections of the felled trees. A cold wind kicked up as clouds slid between us and the sun. Not an inch of blue sky could be seen any longer. I zipped my coat up the rest of the way and hoped, smugly, that the wind would also find its way round the bare legs and arms of the formerly smug couple a few minutes up the trail.

"I think the cache might be buried under the logs," Jonathan called, dejected. In response I made a sympathetic face, but quickly motioned to the swirling, dark clouds and urged my dear treasure hunter back onto the trail.

The Oslomarka refers to, if I understand correctly, all the forested area on the outskirts of Oslo. It is some of the greenest country I've ever seen. Our trail became rockier and muddier as we continued downhill. The route is cut wide intentionally to allow for easier cross country skiing, but the forest at every turn off-trail is thick. Trees grow almost impermeably close in places, branches dripping with green and white lichen tangle together. These are mostly evergreen trees, looming conifers. Their needless blanket the forest floor, absorbing all sound. 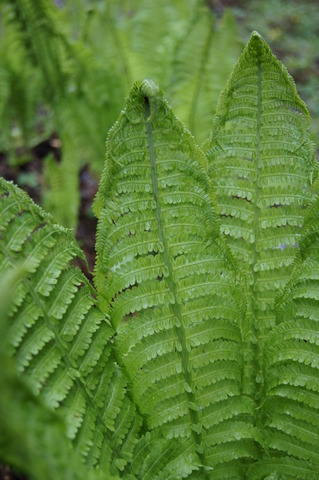 Halfway down, the sky opened. We had been crouched at the trailside considering the intricacies of a tall, unfurling fern when it began. We stowed the camera and yanked our hoods up. But this was no sprinkle, no mist, no light spring rain. The torrential downpour pressed the grasses flat, ran down the middle of the trail like a series of mini waterfalls, and shook the treetops.

Our boots began to sink deeper into the trail mud. At first, we tried to be conscientious of the mud and large puddles, taking wide, thoughtful steps around the edges when possible. I tiptoed along tree branches and other debris that kept me above the mire. But soon enough I tripped and shplunked ankle deep into the ooze. Jonathan extended his hand and pulled me out (a move that included a delightful sucking sound when my boot popped free!). My jeans were sopping wet, four inches of mud around the hem. But there wasn't anything to do except continue, bedraggled, drenched.

And then came the hail.

We ducked into the forest as bits of ice collected on the path, and found a tree thick enough to afford some protection. The storm raged and we laughed. We'd heard, of course, that the weather in Norway can turn quickly and fiercely. Last May we began our vacation in Norway with a backpacking stint outside Oppdal. We had packed for exactly this kind of weather: Gore-Tex jackets, rain pants, backpack covers, lots of long-sleeved, long-legged wool garments, beanies, gloves. What we experienced on that trip was a lot of sunshine. On hikes during the day, we often rolled up our sleeves and unzipped our pant legs, converting pants into shorts. The rain pants and pack covers were never touched.

But last weekend, within a few miles and a train ride of home, we managed to awaken the god of winter weather on a downhill walk.

When the hail had subsided, we continued down the trail. Our sodden jean slapped coldly against our shins with each step. At some point, the rain stopped and we were able to drop our hoods again. And then we reached Sognsvann.

The lake was post-storm placid, reflecting the blue gray of the cloudy sky and the soggy green of the surrounding forest. People who had run for cover when the storm began appeared again. They walked out on the long, wood dock and scanned the horizon, tentative, doubtful yet hopeful, the way everyone feels after a storm. Muddy dogs shook out their coats. Children slapped their white palms into the dark mud and laughed against the spray.

Sognsvann station is about half a kilometer from the lake. We walked through an empty school quad, past a rust-red running track riddled with puddles. On a fenced-in tennis court, two men faced one another with rackets, a bright green ball sailing back and forth between them. It bounced damply on the court surface and sent droplets of silver water spinning, but the men adapted to the new weight of the ball and kept the volley going in spite of it all.

We could see the train sitting at the platform and, not wanting to wait in wet clothes for the next one, we began to run. On the ride back into town, we discussed pizza. Where would we order one? When would we pick it up? How long would it take? Did we remember what pepperoni tasted like? Is there anything better on a rainy day, post hike, than pizza? And, finally, how awesome is it that our favorite pizza place is two blocks from our new home in the heart of the city? 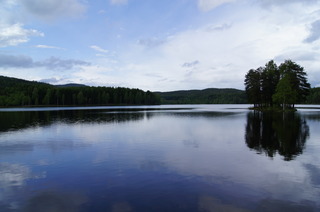