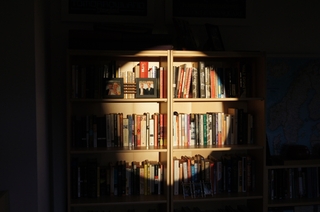 Our rooftop flat has a circle window. On clear evenings, it catches all the fire of the western sky as the sun makes its slow, summer descent. The light beams through the porthole like a spotlight and, over the course of an hour or so, tracks along our back wall. I lay on the couch and watched it make that journey one late afternoon, highlighting all of our favorite books along the way, catching the loving gleam in my brother and sister-in-laws' eyes in their wedding portrait. And then, in a blink, the sun dropped behind another row of buildings and the magic circle of light faded out.

This window is my favorite feature in our new place. Jonathan selected the apartment himself, months before I was able to fly over and join him in Oslo. The process included several trips around the city with a representative from a relocation company hired by his new employer. The rep helped him immensely! But in true Jonathan Camp style, this flat was one he found on finn.no (the most helpful Norwegian site, hands down, for finding apartments, jobs, etc.) on his own and asked the rep to look up for him. The pictures in the ad caught his eye for many reasons, and one was the circle window. When he walked in for the first time, he says he knew it was the one for us. If pressed, he'll even say aloud that, on the first walk through, he fell in love.

I got a phone call early in the morning in February. "Go to your computer. I'm sending you photos now. If you want it, we have to move fast."

As spontaneous as I like to be in some aspects of my life, choosing an apartment is something I would usually prefer to take my time doing. A couple of visits would be nice. A getting-to-know you conversation with the landlord. Maybe even a few questions posed to the departing tenants. Unfortunately, the apartment market in Oslo requires people who move faster than I would. God or Fate was definitely looking out for us in that case, because Jonathan doesn't mind moving fast. The man knows what he wants when he wants it. Better than that, he knows what I want even when I haven't caught up to him yet.

The papers were signed within 24 hours. We made our deposit (three months rent, standard over here) into the required joint savings account. We paid the first month's rent in cash. Within a week, Jonathan had the keys.

He sent me lots of pictures over the next few weeks. I tried to envision our life there, in those strange rooms, under those gabled windows. But it was tough. Even after our stuff arrived, fresh off the boat after two months at sea, and a group of burly Swedish moving men had hauled it up the five flights of stairs, I had no sense of home. Over Skype, Jonathan used the webcam to walk me through on a tour. I began to understand the shape of the floor plan, all 80 square meters of it. Still, I wondered about the feel of the hard wood floors and the large, exposed beams propping up the ceiling. I wondered about the slanted walls and the screenless windows.

On my first walk through the flat, the real one, with my stockinged feet padding on the hard wood and my jaw open in an ecstatic Oh!, I saw everything the way Jonathan must have all those weeks before. And without anyone pressing me, I will say that when I saw it, the skylight in the living room, and the long, narrow bathtub, and the rooftop terrace, and the circle window, I fell in love, too.

Today the circle window is as familiar to me as any feature of any house I've ever lived in. Through it I can see the continually changing cloudscape, the burning colors of the sunset, the stars, birds chasing one another between the domestic cliffsides of the tall buildings lining our street. My cat, Disney, likes to sit on the broad sill beneath the circle window and stick his nose through the opening. On windy evenings like this one, his whiskers are pushed back against his face and he squints his eyes against it. Far below him are people, and it's an angle he's never seen people from before. They push strollers and haul grocery bags, hold hands with one another, clutch coats tighter around themselves against the insistent wind. I like to stand next to Disney as he watches the world roll by on our street. Tonight, a boy wearing goggles and a black jacket buzzed by on a beige moped. Disney's tail hung straight down the white wall from the sill and flipped up at the end like a fish hook. When the moped zipped out of sight, his tail twitched.

But my fascination with the circle window involves more than the exotic world outside. On my daily walk home from the nearby market or the post office, I see the rooftop of my building rise from several blocks away, and the circle window enchants me from my place on the street. Like the porthole of a ship, I automatically wonder what cargo rests behind it. What sailors bunk there? From what port do they hail? I feel that way about the other circular windows on my street, too, but when I see my own, I have to smile. I know what one could see if only they could spread their wings and fly up to peer through.

A living room with a big, soft, black leather couch. A lightwood dining set with newly recovered chairs. A massive television set. Bookcases and books. But beyond that, anyone who pressed his nose up to our circle window to consider the interior of our new flat would see a home. There is a yellow-flowered plant that I purchased on my arrival in Oslo, and I've managed to keep it alive for more than a month! There are two cats that follow patches of sunlight across the floor during the day to sleep in. There are photos of people we love framed and set on each available surface. There is love in this place. It's already a home.