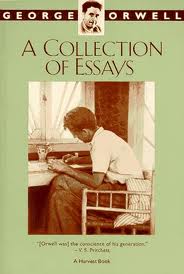 In college I studied Shooting an Elephant (1936), an essay included in this collection, which recounts George Orwell's time as a young British police officer in Burma. The essay has haunted me in the years since.

It was the brutality that stuck with me, the killing scene, one which goes on for several pages as Officer Orwell fires "shot after shot into [the elephant's] heart and down his throat" while the beast refuses to die. But more than that, it was the brutality of his reflections about the time, the place, the Empire occupying the place, the native people, the class system, and the self who suffered the execution of the elephant "solely to avoid looking a fool" (Orwell, 156). That honesty cut me to the bone.

In his famous essay about life at a boarding school in England as a youngster, Such, Such Were the Joys ... (1949), Orwell opens with the horrors inflicted on the little boys who wet their beds. Today we acknowledge that this is an innocent phase in every child's life. We also know that most boys struggle with the training longer than most girls, but this story is only the first of many. Orwell goes on to relate the punishments and canings, the bullying, the accusations of latent homosexuality, the prejudices of his headmaster and instructors, his own laziness. Nothing is off-limits.

By being willing to touch on every subject, willing to treat nothing with undue deference or discretion, Orwell accomplishes as unbiased a study of childhood as possible. Children, he believes, live in "a sort of alien under-water world which we can only penetrate by memory or divination. Our chief clue is the fact that we were once children ourselves" (Orwell, 44). This chief clue is what drives Orwell's writing about his past, and he transcribes his memories as well as possible. Accuracy, though, can be relative.

"In general, one's memories of any period must necessarily weaken as one moves away from it... But it can also happen that one's memories grow sharper after a long lapse of time, because one is looking at the past with fresh eyes and can isolate and, as it were, notice facts which previously existed undifferentiated among a mass of others." (Orwell, 5)

When I write about my childhood, I will admit the presence of a devilish censor. I am a born protector, a very private person. But honesty is the human trait I admire more than almost any other. The childhood memories I find hard to squeeze onto the page due to embarrassment or fear or censure by my family and friends are, at the end of the day, benign. What's more, they are likely similar to the memories of many other people my age. My honesty may be all it takes to allow someone else to apply the same level of honest introspection to herself, a step toward healing, or at least finding a balance.

As readers, we respond to honesty. Even as Orwell looks back and exposes the worst parts of his life, I don't shut the book. I nod and grit my teeth, perhaps, but I turn the page. And I continue nodding.

In Burma, admittedly "young and ill-educated," Orwell was part of the occupying Empire he detested, and was, therefore, detested by the Burmese population. He writes that "the wretched prisoners huddling in the stinking cages of the lock-ups... the scarred buttocks of the men who had been flogged--all these oppressed me with an intolerable sense of guilt. But I could get nothing into perspective" (Orwell, 148). He is not excusing his lack of action, but rather explaining his impotence. Being stymied in the face of a thousand cruelties is something every compassionate person has struggled with. We walk around n a world where 22,000 children die of starvation every day. Human beings are purchased by affluent people in cities large and small. Women are beaten by their husbands. Religion pushes the extremists on every side to declare war. Yet we continue eating, working, playing, laughing, sleeping. Orwell's portrait of himself as a cog in the Imperialist wheel is honest, almost too ugly, but I am pulled closer to him because of that honesty. There is a sameness I feel with him.

Along with writing about childhood, Orwell writes about war, literature, and Fascism, but best of all, and most pertinent of all, he writes about writing. In Why I Write (1946) Orwell contends that a writer's "subject matter will be determined by the age he lives in--at least this is true in tumultuous, revolutionary ages like our own--but before he ever begins to write he will have acquired an emotional attitude from which he will never completely escape" (311). For Orwell, this is true. War, Fascism, Imperialism and Youth are recurring themes in all of his work, the result of his life in a tumultuous time.

The age I live in is potentially more tumultuous than Orwell's own. All the ingredients are there, and most of them are modern spins on the classics (class division, racism, unpopular wars, fear of annihilation, ignorance, prejudice, pestilence and famine). Whether my life is revolutionary is really up to me, and that ball is still in the air. I worry that my tendency to censor myself, to edit for kindness, to shy away from issues that are as universal as they are shameful, will cripple my writing and render me silent.

Orwell answers these worries with a directive, saying it is a writer's "job, no doubt, to discipline his temperament and avoid getting stuck at some immature stage, or in some perverse mood: but if he escapes from his early influences altogether, he will have killed his impulse to write" (Orwell, 315). What I perceive as a threat to my writing may actually be imperative to the truth of my work. Instead of denying these fears, I will write about them. I will put up the mirror and write what I see; only in this way will the reader who needs my honesty see her reflection, too.