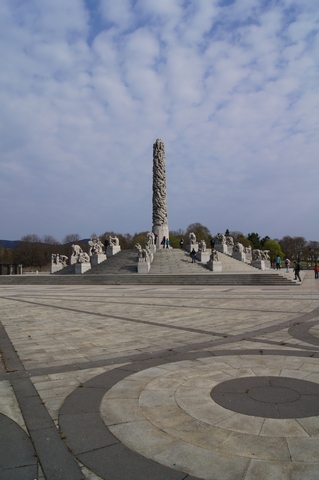 It is early afternoon, pleasantly warm, and I am lying on my blanket in the grass at Frognerparken, the largest city park in Oslo. My pale legs and arms are bare to the sun. It warms me. I can feel it pouring brightly over the crown of my hair, especially hot at the part. I have spent the last hour flat on my stomach, turning the pages of my book, lost in the rhythmless warble of children on the nearby playground, the buzz of bicycle tires, the click of tourist cameras, and the chirping of birds. Having been in Oslo a full month I can now say fairly that this is one of my favorite spots in the city.

The park is vast and green, criss-crossed by walking paths. Playgrounds and public pools dot the perimeter. Tour buses park in the nearest lot, just outside the main gate, their occupants, eager to see the statues, have long since scattered across the lawns and up the steps.

Within Frognerparken is Vigeland Sculpture Park, including 80 acres of grassy space and more than 200 bronze and granite sculptures, all by Gustav Vigeland . The Norwegian sculptor donated these statues to the city and park in return for receiving a free studio space in Oslo. Upon entering the broad iron main gate at the southeast end of the park, visitors can walk straight down the main path across a 100 meter bridge lined with the statues, all nudes. They are gray and polished to a shine at every curve. The figures dance, embrace, wrestle, make love, and die, all along the bridge, all around a grand fountain, all leading to the main attraction: The Monolith Plateau. The monolith rises more than 14 meters into the air, appearing as a totem that includes 121 human figures entwined and clambering toward heaven.

Tourists cross the bridge with their cameras extended, gaping at the methodically spaced figures. The nudes are bulky, voluptuous, arching their backs and whipping their hair. They sit with their backs to one another or toss their children in the air or throw women over their shoulders and stalk back to their caves.

A man in a red ball cap waves his long-lensed camera at his two preteen children, exhorting them to mimic the comic drama of two grappling statues. The son obliges, giving his sister's hair a tug. She responds by putting him in a chokehold just before the camera flashes. Though the position isn't exactly accurate, they've captured the essence, Vigeland's playfully wry view of the Human Condition.

The paths in the park are best for meandering, and on a day like this one (18C/65F) dozens of people have come to do exactly that. Hands in pockets. Backpack straps loose. Cameras idle. Earbuds out. With slow swinging steps they progress around each bend with their faces up, enjoying the light fragrance of lilacs. If in pairs, they chat. If alone, they revere.

I take a break from my scribbling to say hello to an Irish Setter. She gleams copper on her approach and turns out to be all tongue upon arrival. I smooth and scratch her neck, running my palms over the regal dome of her head. When I rumple her ears and make happy clicks with my tongue, she jumps for my face ready to kiss me all over! Her master yanks her back to the ground and begins to apologize, but I wave his worry away. I don't mind. I'm easily won by all dogs; they are blameless to me.

When the setter and her family have moved on, I return to my place on the blanket, flat to the ground, eyes up. Bikes of all kinds spin by. The riders are relaxed, pedaling without purpose. Some wear helmets, but most do not. When a woman rides by, her hair bevels and flutters in her wake. Some have baskets affixed to their handlebars, each holding groceries, a long loaf of French bread, or a book bag. One man rides by with a happy dachshund sitting up in the basket. They both appear to be smiling.

By far the slowest movers in the park are the mothers. They push their strollers and prams along the paved paths, shoulders back, perspiration glistening below adroitly snarled ponytails. The mothers are all ages, all races, all religions. I can only assume that the complexities of motherhood are much on their minds, but it isn't evident today. Here in the sun, on the quiet lawns of Frognerparken, under rustling shade trees and a blue sky, each woman appears peaceful. This walk is doing her heart a world of good.

Sometimes, when a mother and her pram pass close to me, I can see the flower petal hand of the child rise and squeeze at the air, grasping for the sunshine. ometimes I hear the child squeal or coo, and I can only imagine she is trying to name what she sees above her--those white, winging creatures or that flash of blinding brightness in an endless bath of blue.

From the harbor I hear one of the cruise ships bellow. The sound of the horn, the deepest and most vibrant noise I've ever encountered, has begun to signify home to me. I hear it from our flat, from my bedroom when the windows are open. It is the sound of exotic destinations, man's triumph over the barrier of the sea. I close my eyes and enjoy the tingle of the horn again, three times more. My toes are suddenly cold. The sun has passed behind a large cloud. When it appears again, I realize the shadow of the tree nearest me has stretched with time and found my blanket at last. It is late afternoon now, and I have things to do at home. But here, in this grand park, I have enjoyed spring in a way more intimate than has been possible yet in my life. I hate to retreat indoors as long as the sun is high enough to warm my blanket.

I rise and consider my options and then, happily, I reach down and grasp the blanket to drag it farther from the shadow of the tree. It will be half an hour before the waving branches cover the pages of my book again, and until then, it's still my spring day.