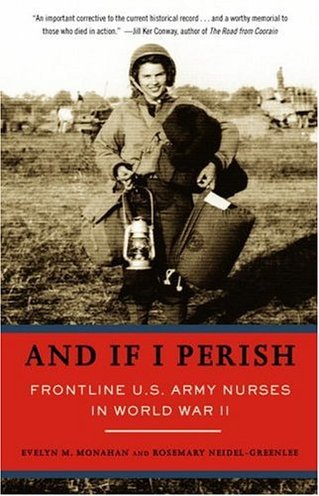 As part of my research for my pet fiction project (a novel which is embarrassingly incomplete and scattered for the number of months I've been "working" on it), I've been reading

And If I Perish: Frontline U.S. Army Nurses in World War II . This is not an incredible work. It's fine. It's comprehensive in its scope of information. It's unique in its study of a group of persons (nurses in combat zones during WWII) who haven't ever, in my opinion, received the appropriate acclaim or gratitude for their efforts and sacrifice. It's heartfelt and emotional, and it tries to be too many things, but always with the best of intentions.

If you aren't fascinated by history, especially military history, this isn't the book for you. But I'm enjoying it. And when I stop being irritated by the way the authors give citations for their written, colloquialized dialogue (no, I'm not kidding), I'll enjoy it all the more.

All that I'm asking of this book is Inspiration. It's working! And that's what excites me most of all.

As penance for failing to post anything for more than two months, I thought I'd go ahead and post a very brief bit of fiction I wrote today as a direct result of my time spent with this book. Please tell me what you think of it.

In his last moments, curled in the corner of a blank, concrete room on a blood-stained litter, his left leg cracked and swollen to bursting just below the knee, a deep, terrifying wound in his belly that exposed his glistening organs to the air, as his breaths became more shallow and rattled in the depths of his chest, and the copper tang of blood coated his teeth and tongue, in those moments, the soldier wanted love.

He wanted a warm hand to hold, soft hair falling against his cheek, someone to clutch and cling to. He wanted an American girl, freckled nose and big, blue eyes, a girl who knew the exquisite, wholesome flavor of the perfect ice cream sundae, someone who had caught lightning bugs on July nights and pondered the glow between her cupped palms. He wanted a heartbeat that was stronger than his own, imagining that the perpetually pounding sound of it deep beneath her canvas coveralls and soft skin would keep him alive, or at least that its continuity would soothe him with the promise of eternity.

He wanted to apologize to her for everything he'd ever done which was less than the best he had to offer, and he wanted her to stop him and tell him he'd lived well, that his death was a great sacrifice, and that he would not be forgotten, least of all by her.

And then, as his pulse slowed and the light in his eyes waned and he began to imagine that he was a child, climbing trees, hand over hand, hauling his lank, young body up between branches, higher and higher, pushing face first through the leaves, and watching the sunset over the warmest, most familiar Iowa field of earnest, golden-green corn, hearing his mother call his name from a front porch he'd never see again, then the soldier only wanted one thing: a lie.

You're going to be okay , Rose said.

She knew she could not pull the soldier up from his current position without causing him great agony, and so she bent lower, allowing her limp, damp curls to swing forward and mingle with his own mat of bloody blond hair. She embraced him gently at first, mindful of the holes and slashes in his clothes and skin, his terribly mangled left leg, but as the moist, low sounds of his breath against her earlobe dissipated, she grasped him tighter, forcefully. Her own tears began to fall, and she pulled his chest to hers, pressing to him hard, and praying for his heartbeat.

She pulled back to look at his face. His eyes were closed, and she imagined, beneath the dirt and blood spatter, that his cheeks and forehead were serene. She took his hand in hers and held it to her chest. In that moment, she was his mother, his sister, his girl, his lover, his wife, his daughter, every woman he had ever known and would mourn him when he didn't return.

This excerpt is not necessarily exemplary of the overall tone of my work. The tale I'm crafting is one of courage and desperation, the human spirit, and an honest look at a moment (a major loss) in America's military history which is misunderstood, mistaught, tucked away and forgotten in favor of our victories.

It is not an ode to the heroism and perceived spotlessness of our WWII soldiers and nurses, necessarily, because I believe that Tim O'Brien (author of The Things They Carried and In the Lake of the Woods ) is correct when he says that a true war story cannot have a moral. But it is a reminder of what some people, thrown onto the wrong cluster of jungle islands by chance, faced and fought between December 1941 and May 1942. It is a hope that remembering the full picture and unabridged history of our country will better us as a people, and that we'll learn our lesson and refuse to suffocate the testimonies of survivors for the sake of positive PR and propaganda.

If my excerpt doesn't make sense, it's because I've either done my job too well, having woven all the bits together so that they require the living fiber of one another in order to be understood, or I've failed. It's possibly cheesy, possibly fluffy. I hope not. Your honesty is appreciated.