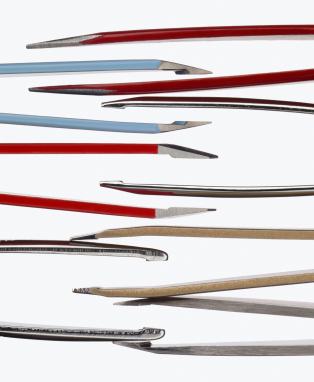 I cried out and pulled my knee to my chest, hopping to the nearest spot on the wall where I could easily lean without knocking anything over. I turned my bare foot over between my hands and squinted at the sole, twisting oddly to catch the light.

There, buried in the pink, translucent flesh was the pine needle.

It was the stubby, dark green remnant of the redwood tree which, last month, took up a festive residence in our loft, bore our many sparkly ornaments, sheltered our prettily wrapped gifts (as well as the occasional sleepy kitty), and throbbed with a fresh, pine scent which greeted us every night on our return home.

We loved that tree, with its upward arching branches. It made us pause with wonder in the evenings. It made us remember the holiness of Christmas.

It took Jonathan hours to chop it apart, reducing it to pieces which would fit in our green waste bin. The floor was littered with sharp, angry pieces. We vacuumed and swept and picked the bits up with our fingers, gingerly, having experienced the extreme sharpness of each needle and the way nothing from cotton to burlap could fend them off.

Naturally, we missed a shard or two, but one of them found me.

I pinched the entry wound between my polished nails. There was no blood, of course. The skin on the ball of my feet is tough, used to slapping around bare on concrete, tile, asphalt, and grass in the summer time, and the blood vessels are hidden way up inside. Thus, I could see the belligerent face of the culprit clearly. He'd backed into his den and was baring his teeth at me.

Picking, scratching, tweaking, prodding. Finally, still straining like a one-legged stork against the wall, I squeezed my foot between my palms and let our an exasperated squeak, letting my eyes, big and forlorn, find my husband's eyes, sympathetic.

Jonathan hopped up from his place by the computer and helped me to the sofa. I limped like an amputee, letting my lower lip tremble for a fraction of a second, just long enough for him to notice and take pity on me. He tilted our lamp toward us and pulled my upturned foot into the pool of light. When his fingers found the sliver and I let out a tiny yelp, he looked up and smiled at me, stroking my naked calf and giving my knee a kiss.

You're okay. I'll be right back.

When I was a little girl, my family took a week long vacation to Sea Ranch on the Northern California coast. The homes there are wood shingle, worn ragged by wind and salt water, and their decks and stairs and banisters sag with the scars of past tides and storms.

On one such deck, my little brother managed to slide one whopper of a splinter up under his fragile, alabaster skin. Multiple inches long, the sliver was fully visible in the misty half-light of a coastal afternoon. Teddy's painful, frightened shrieks brought Mom tumbling from the depths of the house ready to fight off an attacker. But it was a splinter, a bit of house imbedded in his lily white arm.

We had no tweezers. Only needles. And the sight of a needle rendered Teddy into a pile of human Jell-O. Mom grabbed my arm and hissed, Run to the neighbors. See if we can borrow a pair of tweezers.

I tore out of the house and down the stairs and up the gravel driveway and around the bend and through a thicket of shredded eucalyptus. The curly haired lady who answered the door reacted quickly to my terrified grimace and, rather than simply thrusting a pair of tweezers into my trembling, outstretched hands, she cried, I'm a nurse!

Being an imaginative type, on the run home with a nurse trotting in my wake, I considered my mission with the gravity of Anne Shirley running back to Diana's house with a bottle of ipecac. I was about to be a hero.

But my heroism was lost in the shuffle as Mom and Neighbor Nurse performed minor surgery on her Teddy. I marveled at Mom's cool in the face of disaster. She was deft and quick, soothing him with the softest, lightest words even as the nurse zoned in on the wretched splinter.

Ted's pale skin pulled anxious and taught over his little boy muscles and little boy bones. His freckles stood out like frightened lemurs, frozen beneath the talons of an incoming hawk. I remember sitting on the back of the couch with my knees pulled up, surveying the scene with a mix of horror and fascination.

Of course, things were likely to be different when it was my skin under the microscope.

Flash forward to my elevated foot. Jonathan returned to our loft with a pair of fairly pathetic tweezers. He pinched and pushed, but to no avail. After a while, I became more bored than pained, and decided I could live with a twitch in the ball of my foot. My body would, I reasoned, eventually expel the bloody thing on its own.

I crawled into bed to read. After a few minutes, I felt Jonathan's hand on my ankle, pulling the wounded foot out from under the sheets. He'd found a much more intrepid pair of tweezers in a mountain first aid kit and was prepared to do battle. I lowered my book, cringing as he moved in for the kill.

But it barely felt it.

As Jonathan studied the sole of my foot, I studied him. I know him, of course, as I've loved him more than life itself for several years now, but there remain to be moments like this every day. Moments when I glimpse a new plane, a new surface, a new side of his being; it catches the light in a different way and tosses it back to me. It may be similar or related to all that I know of him already, but it's decidedly new. And I take that newness and hold it up for inspection. Gray hairs at his temples, a permanent wrinkle of curiosity and amusement at the corners of his eyes, a remarkable depth to his dedication to keep me safe... I see them one at a time as the days and weeks and months and years pass. And I cherish them all.

Jonathan's hands were steady, his jaw set, his eyes bright with conquest. He was protecting me, keeping me safe and healthy. I needed him to stand between me and splinters everywhere. My need was as rain to a flower. He lifted to it, face up, receiving the miracle of water from heaven, and then turned his rejuvenated strength to meeting my need.

He extracted the fierce needle from my foot and replaced my leg neatly under the covers. He had conquered the splinter; he had saved me. And as he swaggered out of the room, I called out my thanks.