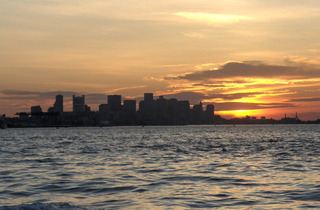 How odd to watch night pull toward me from across the sea. My plane touched down at Logan and I shook my head, refusing to accept the glitch. We taxied, and the shadows pushed out long and westward.

No , I thought, the ocean is supposed to swallow the setting sun, to reflect the bit remaining above the horizon so that the day at the beach may last longer.

But the glassy harbor was dim, cradling the dainty hulls of dozens of white sailboats, their sails glowing in the last rays of the sun fading behind the city.

I deplaned with the crowd, gathered my bag, and hurried to the taxi stand. We'd landed early and I wanted to catch a glimpse of the famed Boston skyline before dark.

"Lesley University!" I told my taxi driver. "In Cambridge, Massachusetts."

I know he didn't need to know what state my school was in, but I was too excited and too proud to care.
My driver's name was Jean and he spoke with a thick French-Haitian accent.

"You may be from Cal-ee-four-nee-uh," he said, laughing into the rearview mirror as I snapped photos out the darkening windows of the cab. "But you love Boss-tunn, eh? You love eet bett-ah here."

"Maybe," I said, twisting every possible way to see the tall buildings around me. A single white church steeple stretched tall enough to grab a final fistful of pink sunlight. I raised my camera to retain that moment forever, but suddenly we were underground.

A complex tunnel system winds beneath the city. Smaller tunnels merge into the main artery every few minutes. The current of motors, exhaust, and taillights swept us along until we emerged near the bridge that would take us across to the Cambridge side.

Jean pointed out the campus of MIT. Duly impressed, I craned my neck to read the names of buildings as we sped past. Night had sealed the deal while we were underground, so further efforts at picture taking were in vain. Then, a glorious building flashed between the trees to our right, a box of glass and steel filled with hundreds of rows of colorful books.

"Is that the library?" I asked my tour guide.

"Yes," I said again, tapping my finger against my window. "Over there. Is that the MIT library?"

"Laugh if you want to, Jean," I said. "But there is nothing in this world I love better that a good library."

He became serious. "Eet is good to read," he said. "You are a stoo-dent. Good read."

Houses here have porches, honest-to-god, sir, may-I-call-on-your-daughter, porches. They are deep and sturdy, held up by heavy pillars and a storied history. And, while all the Victorian homes in this neighborhood have been repainted in a hundred fairytale colors, I can easily imagine every major scene in our country's history playing out in these homes.

Jean dropped me on Everett street, just outside the main office which had long since closed for the night. I thanked him and he shook my hand. "Don't-uh stuh-dee too hard," he said. Then his laugh bubbled up again as he reached out to slam the trunk of his cab. "Don't get lost in zee lye-bray-rees!"

I watched him drive away and around the corner. Everything was quiet. I breathed the hot night air, damp after a day of thunderstorms, and looked around. I've been studying the campus map since March, locating every building I'll be using over this week and a half, so in one way it was immediately familiar. In another way, though, the three dimensionalness of the buildings took me by surprise.

The main buildings are all Victorian and Georgian styles. Their facades fold back away from the street and around themselves. They are vast and romantic from one angle, shy and retiring from another.

Muscling my suitcase up over the curb, I followed the signed to the main quad and the Public Safety Office (where I needed to pick up my room key as the housing office had closed). Everything is well lit. I could see the outdoor amphitheater plainly. In the two large buildings on either side of me, I could see students running on treadmills in the school gym and horsing around the student center in their sweats.

My room is in 3 Wendell, the newest dorm on campus. It appears to be a green Victorian from the street, but within it has been retrofitted as standard housing. Air conditioned! What a life saver!