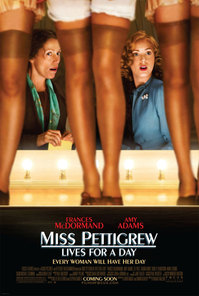 If I haven't already established myself as one of THE premier Hopeless Romantics of all time, let this be my moment.

Early this year, a movie was released called Miss Pettigrew Lives for a Day . It is the story of an unemployed governess named Guinevere Pettigrew (played brilliantly by Frances McDormand of Fargo and Friends With Money ) who finds herself stooping to less-than-ethical measures to secure a job in 1930s England.

By a twist of fate, she finds herself suddenly at the beck and call of the glamorous and guileful Delysia LaFosse (the ever enchanting Amy Adams), a bewitching American actress with ambitions of stardom who is willing to utilize every one of her natural resources, from talent to sex to trickery, in order to succeed.

The wise Miss Pettigrew is immediately swept up in the complex, conniving society that surrounds British legitimate theater, but soon discovers that she can do some good by setting an example for the flighty Delysia... inspiring honesty, integrity and encouraging her to place true love above all other pursuits.

Here is my favorite scene, and what I believe is one of the most romantic duets ever captured on film... Delysia and her best friend, Michael, in what could be their final performance before she is on the fast track to dramatic success and he returns to America:

I loved this movie when I saw it in the theater with my friend Cindy, and I knew immediately that it would be one to own and to watch over and over in years to come. Then, on the long plane ride home from Switzerland in September, Miss Pettigrew was playing on a loop on one of the movie channels... so saw it several times, and fell in love with every nuance.

Not only does it incorporate the over-the-top, almost senseless decadence of 1930s escapist films (remember that the world was in the midst of the Great Depression), but there are many subtle references to the impending WWII conflict. For the fashion, for the swinging music, for the uniquely '30s plot, I would suggest this film to friends and family. But it is for the exquisite Amy Adams (of Disney's Enchanted ) and for the pitch-perfect McDormand... and above all, the darling chemistry between those two impressive actresses, that I strongly recommend this movie.

It will put you in a good mood. It will make you happy about life's simple pleasures. It will reinvigorate your belief in the power of Love... both romantic and platonic. Or, it'll make you roll your eyes and think, "Audrey... what a sweet, silly girl." Either way, along with Atonement and Wall-E , Miss Pettigrew Lives for a Day was one of my favorite movies of 2008.