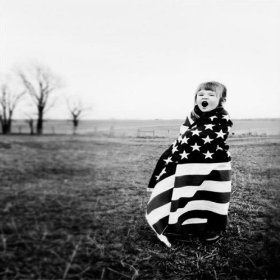 November 4, 2008 dawned to the sound of my shower and Jon's groaning at the prospect of being out of bed before 7:00 am. Our polling place is the elementary school across the street, so we pulled into the parking lot moments after the doors opened. Already, there was a lone line of eager citizens stretching out the door. I was more than happy to stand in line (something I've never experienced as a voter). The turnout made me very proud to be an American. I gazed at the people flowing in from the parking lot to extend the line behind me and marveled at the beauty of democracy.

Jon and I linked arms and blinked against the chilly morning air, taking final consideration of ballot measures and political candidates before entering the voting booth. We joked that our ballots might just be exact opposites of one another, a complete wash. That wasn't actually the case, but it could have been. We eavesdropped on the conversations of our fellow would-be voters as they whispered to one another. When it came time to sign the register and take our ballots from the volunteer, we exchanged a knowing glance before heading to our separate booths.

I voted. No on 8. Yes on 4. Abstained on 11 (the concept of Redistricting strikes me as something that laypeople cannot possibly understand without taking a university-level course on the subject). No on most bond measures. These decisions had been carefully made after doing research and participating in lengthy discussions with friends and family. Anything I didn't feel qualified to consider... I didn't sully with an uninformed vote.

Most of all, though, I have agonized over my preference for President, torn by issues as massive as the troubled economy, as polarizing as abortion, and as petty as choice of vice presidential running mate. Finally, I came to the end of the road, and all was quite clear to me.

Today I voted for President, but I am not going to share my choice.


As of the last couple of hours, the contest for President of the United States has been decided in favor of Barack Obama. It is my contention that, as soon as the defeated candidate (in this case McCain) makes the concession call to his opponent, my personal vote no longer matters. Whether I voted for Obama or McCain, I am now an American citizen who will be living under the rule of Barack Obama. He has my respect, and I do not feel the need to make my vote known. It makes little difference either way now that the battle has been decided.

Barack Obama may choose to tax the rich at a greater percentage than the middle class, a practice I find to be (at best) unfair. He may choose to appoint Supreme Court justices who will uphold Roe v. Wade. He may pull out of Iraq in a premature fashion, leaving the country we intended to liberate in an unstable position, vulnerable to the attack and domination of extremists. He may not be able to live up to the fervor generated by his campaign.

But tonight I listened carefully to his speech, and I was impressed by his promise that, after acknowledging that his presidency will be of the people, by the people, and for the people, he will always listen to the sentiments and priorities of Americans... especially when they disagree with his own. How interesting. How humble.

Tonight, Barack Obama made history, not only by become the first black President of the United States, but by attaining that position in a strong, majority-supported fashion which crossed party lines and destroyed the political trends of decades past. Many Republicans, many Independents, voted for a Democrat in this election, indicating that Obama inspires more than mere passion; he inspires loyalty. My hope is that he will utilize that loyalty to persuade our country to remain involved and informed, not just to nod along with the stump-speech rhetoric he has been dishing all year, but to care about the state of our communities, our families and our nation.

The road out of economic stagnation is going to be a long one, but my hopes and prayers are with the next leader of our country, as they have been with Bush, as they will be with every subsequent President in my lifetime. Our President deserves our respect and our support. Holding the most powerful office in the world is a tremendous burden, a fantastic responsibility. Unfortunately, people forget that too easily.

In Obama's victory speech at Grant Park, Chicago this evening, he quoted Republican President Abraham Lincoln. While Obama abbreviated the quote for maximum effect, I am struck by the weight of the quote in its entirety. Taken from Lincoln's first innagural address in 1861:

We are not enemies, but friends. We must not be enemies. Though passion may have strained it must not break our bonds of affection. The mystic chords of memory, stretching from every battlefield and patriot grave to every living heart and hearthstone all over this broad land, will yet swell the chorus of the Union, when again touched, as surely they will be, by the better angels of our nature.

Today I voted, and my choice may well have been Obama, it may have been McCain, but the outcome should immediately void any individual, prideful importance. As of November 5, 2008, I am hopeful that my fair country will benefit from the wisdom of Abraham Lincoln and move forward, aided by the wings of our own better angels.