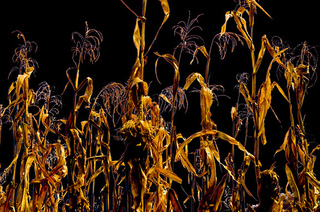 Our earth rotates on an axis that rests at a slight angle in the chasm of space, and as it spins and orbits the sun, we humans are audience to a spectacular change in climate, daylight, the migratory patterns of birds, the life cycles of plants, the color spectrums on the leaves of trees as they approach and succumb to an inevitable death.

Autumn is the final, glorious chapter of the year, and truly puts on a show for us each October. And the climax of October is Halloween. It evokes memories of grease paint and spongy clown noses and the sing-song of little children calling "trick-or-treat" to generous, candy-giving strangers. How lovely! How precious!

Unfortunately, between traveling and delving into upcoming election issues, I almost missed October! Around my office, the trees are suddenly past their colorful autumn peak, and the majority of the remaining leaves are a regretful brown or beige. There hasn't been time to walk down the street and slowly shuffle my shoes through the piles. There hasn't been time to bask in the glow of an Indian Summer sun and gaze at the corn blue sky.

You see, I love Autumn. I love October. I especially love October Sundays. But I've been dragged along by life this month, hitting the ground running after my return from Chicago on the sixth. Only a few of the zillions of October traditions I've nurtured for years have held up under the weight of 2008. For example, I've made it through a handful of my favorite October movies... Young Frankenstein , The Ghost and Mr. Chicken , etc. But there are so many more on my usually-watched-by-now list... The Male Animal , How Green Was My Valley , Remember the Titans , The House On Haunted Hill (the original, of course). And the month is almost over!

Also, this year we forewent our annual trip to the Half Moon Bay pumpkin patch where we've picked out the best pumpkins ever for the last 5 years. It's a day-long excursion, a major time commitment in a month as full as this one, and when we decided to let the idea go, it didn't seem like such a big deal. But now, our porch is pumpkinless and I didn't get to take a picture under the Aunt Audrey's Pie Shoppe sign (a cherished tradition within the tradition). It hurts. And when we celebrated my friend Amy's 24th birthday on one October Sunday this year, it turned out to be a night when all of us were feeling our age and chose to stay at home for a movie night and cupcakes rather than romping around the corn maze, as originally planned.

However, unwilling to let the corn maze tradition slide by, Jon and I went with a group of friends last weekend instead. I'm supremely glad we packed that in (even if our pal Dave slipped and fell into something smelly along the way... honestly, that incident made the night quite memorable!). The corn maze in Lathrop is vast and, while there have been better patterns in past years, I can't get over the thrill of spending nighttime hours running through the high corn. Not only does the seeking of a way through a maze crack open the puzzle-solving portion of my brain, calling out my inner Nancy Drew, but seeing the sprouting green and white tops of the corn stalks silhouetted by the bright stadium-style lights against a pitch black sky spurs my imagination into action.

Between the rows of corn, holding my husband's warm, long-fingered hand, I am the ghost of a murdered woman... I am Joaquin Pheonix in M. Night Shyamalan's Signs ... I am afraid of the dark... I am four years old... I am one of my Quaker ancestors on her farm... I am Paulette Goddard in The Ghost Breakers ... I am wishing to be all alone with Jonathan in the middle of the field in the moonlight... I am the last person on Earth... I am the subject of Edgar Allen Poe's masterpiece Annabel Lee ... I am a catcher in the rye... I am the spirit of October.

Tonight, Jonathan and I will be taking a trip out to a pumpkin patch in Livermore, certain that we'll find two very suitable pumpkins there (even this late in the game). And then, at home, we'll spread out cardboard on the floor and set to carving faces into our squash canvases. Perhaps they'll be ghoulish or garish or grim. Perhaps they'll be toothy or tasteful or trite. Whatever the case, the smell of pumpkin flesh and the sound of pumpkin seeds dropping on the cardboard will fill our home. In the background, the delightfully terrified and desperate voice of Cary Grant in Arsenic and Old Lace will be making us laugh.

Finally, we'll set our jack-o-lanterns out on the front porch and light the candles in homage to October. My October.