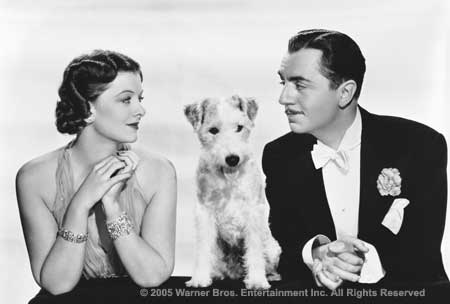 Private Detective Nick Charles is lying in bed after surviving a mugging the night before. Both Nick and his wife, Nora, are reading the morning papers.

Nora : Why, Nicky! It says here that the intruder shot you. That's not true.

Nick : Hah. I'm a hero. The Tribune says I was shot twice.

Nora : And I read where you were shot five times in the tabloids.

Nick : Now, THAT'S not true. He didn't come anywhere near my tabloids!

If you've never had the chance to watch any of the "Thin Man" movies, a collection of 1930s films starring William Powell and Myrna Loy, you're in for a treat. The plotlines are less contrived than many of the mobster-related movies of the era. The dialogue sparkles, even at cheesier moments, aided by natural chemistry between the affable Powell and spunky Loy. Alcohol consumption abounds, Asta, the loveable terrier, saves the day, and often times there are excellent cameo appearances by the likes of Jimmy Stewart to round out the show.