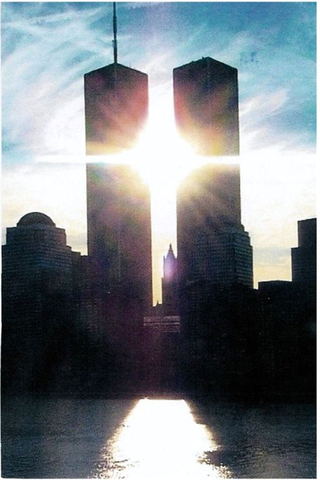 Go ahead and scream and holler for an end to this war...

Please, run out in the streets and chant and pump your fists in the air....

I'll not stop you.

Even when you ignite my country's flag in protest, something I find to be heinous and absolutely offensive, I'll step aside.

But keep in mind that in your protest you are living proof that our guaranteed American freedoms are necessary and valuable and should be held up as a standard, nay a beacon, for the oppressed peoples of the world.

The rabble who hijacked airliners full of men and women and children on September 11, 2001 hated me and they hated you... but more than that, they hated us. You and me. Your viewpoint and mine, side by side, different perhaps, but operating in parallel and out of respect.

It was the fact of a constructive relationship existing between people of many perspectives which incited the wrath of Muslim extremists, men who lived (and were willing to die) to see the world dominated by a single, tyrannical stance on God, women, knowledge, etc.

Thousands perished in the smoke and flames and ash of the Twin Towers. More died as heroes in a field in Pennsylvania. And even more were killed at our Pentagon. Do you remember that day? Of course you do. It's my generation's Pearl Harbor. We had not yet known infamy and that first taste was vinegar to our innocence.

I remember the impossibly thick clouds of smoke and the sparkle of glass shards raining down the sleek columns of the towers. The red and orange demon tongues of fire lapped at the busted windows, licked at the steel frame, wearing it down 'til it buckled and the whole thing came crushing down.

But before that, people jumped, flung themselves from windows.

There was a man in a suit and tie
who took a cartwheel in the bright blue sky,
choosing to shatter his bones
rather than being burned alive.

Can you imagine what you would do if those were your final two options. Don't forget that he was alive all the way down, wind in his face and hair, a view of the ocean, heart beating and lungs swelling until the moment he hit the ground. Those images are carved into my brain, the lines raised and puckered like scars in flesh.

It's a good thing they took that footage off the TV every day...

I might have remembered that somewhere there lives a man who hates me for breathing, for exposing my collar bones in public, for being eligible to drive cars, attain a position of authority over male colleagues, spike a volleyball, maintain a blog, initiate sex with my husband, own property, travel without an escort.

No, I've not forgotten. And while I spent this 11th of September on business in Sausalito, California, eating Lobster bisque and chatting with my mother and our clients, there wasn't a moment I neglected to appreciate the gifts of sight, smell, sound, taste, and touch with which I am blessed.

The air was salty and bright, I hugged my mother before we parted ways, birds sang and people mingled on colorful street corners... I am alive. I am free.

A world full of ignorant people is too dangerous to live in. Let us all take it upon ourselves to read and confer and debate until we have some perspective on the plight of our fellow man. Empathy is perhaps the characteristic of man which keeps him closest to God. I pray for a safe world. I am proud that America did not take the 9/11 sucker punch lying down. I believe we should remain in a military capacity in every place where the seeds of malice are sewn against a free thinking world.

In spite of the Terrorists and their campaign, I have these opinions and I express them here at my whim. I write this for those that drowned in the concrete and ash on 9/11/01, for every soldier who has died at the hands of an insurgent in Iraq or Afghanistan, for Daniel Pearl and every other reporter or defense contractor or other American civilian who has been murdered in that savage land.

"I have sworn upon the alter of God eternal hostility against every form of tyranny over the mind of man." - Thomas Jefferson