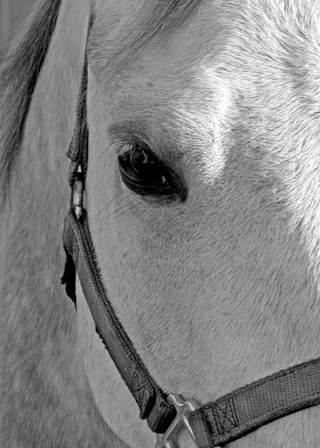 Pressing my cheek to the sleek, hot shoulder blade of my mount, Darty, a beautiful and willing chocolate brown gelding, I dropped the reigns and stretched my arms down to my toes, pointed out from their places in the stirrups. My chest brushed the horn of my saddle as I embraced Darty's back and relaxed my spine and tailbone.

The pleasant pull between my Achilles and the backs of both knees caused me to sigh. Darty took a couple of light steps and turned his massive neck to sniff my dangling hands. I scratched his velvety nose and made sweet kissing noises in response. Convinced of my stability even in this odd position, he went back to nosing the dirt in the arena, snuffling at his own hoof prints.

Around us, a fragrant breeze rolled over the golden hills and soothed my neck, damp with sweat beneath my free swinging dark hair. I was dead center in a large riding school arena, complete with small jumps and obstacles. Beside me, Sam, my instructor for the hour, was walking me through a series of in-saddle stretches from her place astride a glorious, red-gold horse with a sassy disposition. Sam's energy and enthusiasm for the sport of riding radiated to me and I was caught in her glow.

After a few moments, I righted myself in the saddle and gathered the reigns once again, nudging Darty into a slow, swaying walk. This was my first lesson since I took a sabbatical in January of this year, hoping to spend the extra time and money house hunting and saving for a home purchase. Yesterday, after months of planning and hoping, after contracts had been signed and mountains of loan paperwork had been submitted and resubmitted, Jon and I took a heavy blow to the temple when we learned that the condo we'd "purchased" was considered a bad loan risk by our Lender.

In a moment, that happy hope which had been so integral to our lives in recent months, was knocked from the sky.

It's rather unbelievable, actually. The home itself is a condo in downtown Livermore. It was built in 2006 and occupied by the original tenants for less than a year before foreclosure. There's nothing wrong with the place. And Jonathan and I had been assured so many times that it was a steal, that we'd easily get through the paperwork, that in the end victory would be ours... a three bedroom, two and a half bathroom victory within walking distance of the movie theater, many restaurants, Starbucks, the grocery store, our church, Donut Wheel.

I cried when the guillotine dropped yesterday.

You see, we were supposed to be moving in this weekend. Yup, everything looked good, we had a green light and had been packing since July (there have been many, many, many delays in this process... all justified by an end that now we'll never know). Our life is in boxes lined up in our living room. Our walls are bare. Everywhere I look in our current place, I'm reminded of how many hours we spent filling boxes, all while laughing and planning our future in our first home. These reminders leave me with that painful sucking feeling in my gut, the kind that tastes like guilt or fear or a reaction to betrayal.

Last night, after the news, Jon and I held each other for a while. Being blindsided sure knocks the wind out of you. Then, numb, we decided it was too hard to remain amid the towers of boxes and the naked, white walls. We drove to Outback Steakhouse for dinner and gorged ourselves on cheesy fries and Ranch dressing, a Bloomin' Onion, Caesar salad, hot brown bread and butter, steak and potatoes. Every inch of our table was covered with food and we ate fast and hard, stuffing ourselves silly. At the time, we said we were just really hungry. In reality, it was another kind of void entirely which was nagging us, and we were willing to do anything to ignore it.

Afterward, we drove to Castro Valley for a game of miniature golf. The course there is far superior to Boomers! in Livermore, including water hazards and two-part holes. I lost by a shameful margin (Jonathan got a hole-in-one), but the thrill of being almost entirely alone on a very colorful, miniaturized golf course, coupled with the nipping cold of autumn's onset, did take our minds of the Loss.

I didn't sleep last night. All I could think about was our time and money being frittered away on what turns out to be an impossible goal. If it were any other house or town home in Livermore, we would have been moved in by August. And I've purchased a new bed set and bathroom stuff, planned my "studio" in one of the spare bedrooms. My commute to work would have been cut in half! Silently bemoaning the loss of all these things kept me tossing and turning until I finally got up at 3:00 am and turned on an old movie.

I Was A Male War Bride . Not one of Cary Grant's better films, but it has its moments.

This morning, I knew what I needed to do. I had recently called a riding school in Livermore, different than the one I'd left almost 9 months ago, and asked if I could come by and meet the instructors and the horses. Would you believe that noon on a Wednesday was actually the perfect time?

Jon drove me down a long, country road and up a driveway to a large, neat equestrian center. I walked between the stables and clucked my tongue at the long, baleful faces of the horses, curious at my approach. Four tiny Jack Russell Terriers came bounding up to meet us and were soon completely taken with Jonathan, who unwittingly began a game a fetch which lasted an entire hour.

The instructors did me one better than I'd hoped, quickly swinging me aboard a mount, the aforementioned Darty, and taking me through the beginner paces to remind me what I'd been missing.

For a solid hour I walked and trotted around the arena, practicing turns and cues, transitioning between posting and a two-point position, awakening muscles which had been dormant since January (even during my first season as a Runner). Like water to parched lips, the ripple of horse muscle under my legs, the smell of horse hair and manure and sweat, was at once a great comfort and a vital nutrient to my soul.

Rather than feeling more emotional about the house trauma, I felt completely focused on the ride. I could only think about my leg positioning, my posture, maintaining tension at the bit, elongating the horse's stride... there was no thought of mortgages or condos or, really, disappointment.

When I finally dismounted, scratching Darty generously behind the ears, a huge pressure had disentangled itself from my spine. A building of skill and strength, an increased focus, all this was mine after an hour of time spent at the height of a horse.

I am still smarting from our loss; it will continue to occur to me as I cook dinner in a kitchen which is not my own or gaze at walls which I cannot choose to paint or carry a Christmas tree into a room without vaulted ceilings. But I am not lacking the sense of "home" I've nurtured with my husband... that's just plain there. And if I feel down, I now have a place to go where I can sit tall astride a horse and feel his enormous heart beating in the hulk of his body. That's a prayerful position, and one I am so glad to be beginning again.