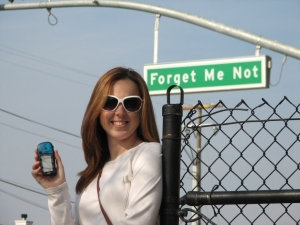 On an ordinary Sunday Jonathan and I would have stayed in bed longer than we should, waiting until the absolute last second before jumping into and out of outrageously quick showers. On an ordinary Sunday Jon would have pushed my buttons by insisting that we stop at Starbucks and brave the mile-long line for his 'breakfast' (READ: grande latte); a fifteen minute stop when we only have six minutes before church starts. On an ordinary Sunday, church would have been the first and last major destination of the day (as a non-coffee drinker, I don't place Starbucks in that category, even if my husband does subsist off of their products). And, on an ordinary Sunday, we would have lunched with his folks, returned home to do a couple (sometimes zero) basic chores, and lounged around the house wondering how weekends fly by so quickly.

But this was no ordinary Sunday.

As it turns out, the little day trip we took on Saturday, down Tassajara and into Dublin, jumpstarted us into a geocaching frenzy. It all began with an obligatory trip to the nearest cache to our house, just down the block. Apparently there had been some Youd-insistance that we add this to our list of finds as soon as possible (they'd found it first, of course). This was channeled through Jon to me, and since we had some time on our hands Saturday anyway... 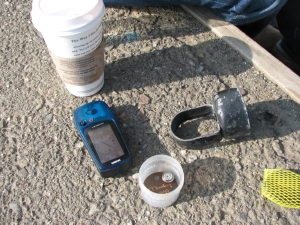 Forget Me Not Common was the location. That's our happy little GPS in my hand. And that's why we had it with us when we took the back roads to Dublin, and stopped at a tiny regional park on Tassajara purely out of the most meager curiosity. Three impressive finds (and one near miss with poison oak) later, we were refreshed and on the hunt for more! But darkness was falling... so we put it off until Sunday, making a point to prepare as much as possible the night before.

Earnestly, I printed out the names and descriptions of fifteen Livermore caches we had not yet discovered. Then I ordered them by their distance from our house. This process took more than an hour, but I felt so organized! And my zeal continued into the following day as I made a checklist of the gear we needed for a successful geocaching extravaganza:

Then, on this not-so-ordinary Sunday, we rose in plenty of time for a coffee stop at Starbucks (where I bought an over-priced donut that didn't hold a candle to Donut Wheel). And prior to church we swung by the Highway Garage cache for our first find of the day. It took some poking around, but Jon (.monkey) found it. We signed the log, smiled at our fabulous productivity, and went on to church.

After church and lunch with his folks, we got off to a slower start (which is what we deserve for sidetracking our burgeoning geocaching determination in favor of quality time with friends and God), racking up our first Did Not Find (DNF) of the day. But once we got walking, there was no stopping us. We hiked to the tops of hills, walked through parks and down trails. We hit Almond Avenue, Robertson Park, and crossed town a couple of times. While, admittedly, Jon did a lot of the dirtier work (as was sometimes required), there were quite a few 'Wife finds' today, too.

At the end of the day, we counted off a total of 10 finds! A record for us. Grand total of 33 (my second favorite number!). I recorded all of them and registered the three Travel Bugs we found today. Two of them we'll release back into the wild world of the geocacher next weekend, though we haven't decided where, yet. And the third Jon will take with him back to Baltimore in a couple of weeks.

We finished up the day by eating pizza with my folks. Dad had the Super Bowl on in the background, though we didn't really care. And I suppose if you ask me, I was rooting for the Bears (who lost) because Dad was rooting for the Colts (who won and deserved to win). 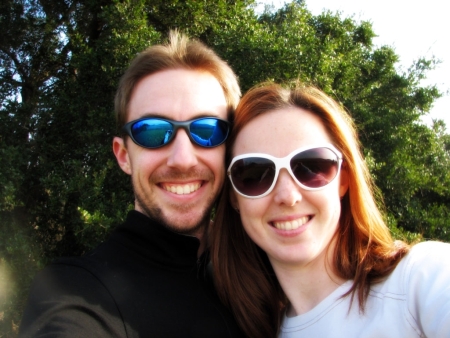 It was a long, exhaustive, beautiful, motivating, memorable day. Jonathan and I have spent a hundred Sundays together doing the ordinary things. We forget those days in favor of the many adventurous ones we've racked up over the last four years. Today I am proud to say that we did not stick to the well beaten path we usually tread. Rather, we honed our treasure hunting skills and came away with some neat stuff, some cool insights into our hometown, and the drive to do it all over again next Sunday (weather permitting).

On a very quick side note, my only wish since the insane start to the beginning of this year was to make it through to February 2. If I could do that, I decided, everything else would be okay. Well, I made it. Work was crazy and rough and only escalated right up to February 2, and then I topped out. All the complicated stuff was complete. All the scary stuff was behind me. From this moment on, barring any unforeseen crises, my life should be cake in comparison until Leslie 'Mom the Boss' Pancoast returns to work with me again. I continue to look forward to that day. But in the meantime... I made it!