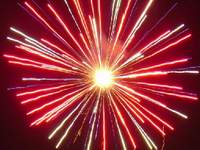 My frosting expired a year ago today. Yes, I know that today was, technically, the birthday of 2006... but the bottom line is that, had Jon not noticed the little expiration notice on the bottom of the frosting container, someone could have died! Or, at least become very, very ill. And that's not good.

New Year's Day is traditionally a day of resolutions. Everyone resolves to lose weight or go skydiving or pilot a commercial jet. ("That's a great resolution, Pheebs. Now you just have to find a plane-ful of people whose resolution is to plummet to their deaths.") My first resolution involved the idea of exercising regularly. Already I've ruined that one by foregoing the exercise on the very first day of my clean slate. Oh well.

But resolutions aren't always proactive. Sometimes one must simply resign herself to the cold hard facts.

Case in point: As of today I have resolved that I am clinically unable to make a cake without a mistake. (Though my ability to randomly rhyme is right on target.)

You see, my friend Cindy is turning 22. And I thought it would be nice to make a cake for us to have after her birthday lunch tomorrow. Last year the cake fell apart. Literally. I pulled it from the oven and attempted to frost it. Instead I pulverized it. But that was last year! I've learned so much. I've come so far. Now I read directions.

And when I chose the cake mix today at the store, I did it deftly, like pro. I sized up the aisle, considered the many scenarios, moved between other shoppers, breathed deep and, at the critical moment, snatched the milk chocolate Betty Crocker cake mix from its place on the shelf. With remarkable accuracy I simultaneously selected the creamy white frosting (to be dyed pink) and placed it in the basket. How hard could this possibly be?

Let's start off with my New Year's Day miracle. Always the professional, I remembered to preheat the oven. Kudos are much appreciated. Then I consulted the directions on the back of the box. So far so good.

Eggs? Eggs are required for a box-mix cake?

I fell to my knees, clapped my hand on my forehead and yelled "Steeeeeeeeeelllllllllaaaa!" at the ceiling.

You believed me for a second, didn't you? Actually, I remained calm, resolving to go to the market and fetch myself the necessary eggs without whining about the extra trip out in the wind and rain. It is at the times when we are at peace with ourselves that God sometimes find it in his heart to issue a blessing.

A half-full carton of eggs was sitting on a shelf in my refrigerator. That may not sound like much of a miracle to the rest of you, but please recall that I don't eat eggs. Neither does Jon (mostly because they aren't in the house). Recounting why the eggs were there is unnecessary.

So, with the eggs, I followed the instructions to the letter. I mixed at the right speeds for the right amounts of time, never once allowing myself to think of shortcuts. The pans were greased, the oven primed. All turned out well. And as the beautiful twin layers cooled on the rack outside the oven in their chocolaty glory, I sighed.

"Audrey," I said to myself, "There is no possible way you can ruin this now."

When Amy and I went into the kitchen an hour later to frost the cake, I was on a roll. We dyed the frosting and stacked the layers. Naturally we were laughing and joking, having a good time. So when the pink frosting ran out, I was caught off guard.

No. Indeed, we had exhausted the tin. I snatched it up to read the instructions. It claimed to contain enough frosting to cover two 9-inch layers. Boy oh boy, do I hate being lied to! Amy read the same instructions, in utter disbelief! Even Jon came downstairs to verify that the container was vacant and the cake was barely half frosted.

I know what you're thinking. "You spread it to thick, Audrey, you ninny!" But you'd be wrong. Because I had spread it so thin, I could still see the chocolate through the pink.

Jon suggested that we may have another container somewhere. We did! Hidden away in some remote corner of our cabinets was a container of chocolate frosting. Amy and I, in unison, decided to ignore the fact that this frosting was both different in flavor and in color. Instead we decided to go for a "marble-ly" effect. I poured it into the bowl to mix, and Amy swiped a bit with her finger... because that's what grown-ups do when they bake cakes... eat the frosting.

I spread a little bit on a blank part of my cake canvas when Amy grabbed my arm. We're very close, Amy and I, and can communicate through touch, ESP and even blinked Morse Code messages. Something was very wrong! Silently, careful not to make any sudden movements, I backed away from the cake. Jon held his breath.

"It tastes..." Amy inhaled and searched for the right word. "Weird."

Not that I didn't trust her, but I have a finely attuned sense of taste myself. So I gave it a go. And I regretted that decision for the next hour as I drank and ate anything I could in order to get the taste of that frosting out of my mouth! Jon told us we were crazy, but checked the container anyway. Expired January 2005.

News flash... It's January of 2006. What were the odds that I would smear expired frosting on my best friend's birthday cake after exhausting a supply of completely-good frosting purchased that day?! The odds, as I came to accept, didn't matter. Because the unthinkable had happened.

Discreetly I removed the offending frosting from the square inch of cake it had defiled, and threw the rest away. Then Ames and I were on a mission. Someone, somewhere had to sell frosting. The caveat? We didn't want to go more than two minutes from my house. In case anyone faces a crisis similar to this one, I'd like to save you some time. The 7-11 and Rite Aid do not have frosting in any flavor or color. Oh, and PW Market keeps weird hours and will most likely not be available when you need them most desperately.

"You know, we could make frosting." Oh Amy, always such an optimist. Naive Amy. Nobody makes frosting! People buy frosting. And apparently they only buy it at major grocery store chains during normal business hours on days that aren't holidays! You learn something new every day.

Still, she checked all of my cupboards for powdered sugar which, we were sure we'd heard somewhere, is a common ingredient in homemade frosting. Though none of us could figure out what else would be included. Amy suggested water; Jon suggested egg whites. But that all became irrelevent when we realized that Jon and I don't own powdered sugar.

I felt defeated. Amy patted me on the back, assured me everything would be all right. In fact, she said that really, Cindy's birthday wouldn't be complete without a cake that slightly resembled Quasimodo. Okay, that might not have been exactly what she said. Amy isn't that mean.

Twenty minutes later we had ourselves a cake. By using my precision spreading skills and rock steady composure under pressure, somehow I managed to cover every bit of that cake with fresh, pink icing. And then we took turns covering it with pastel sprinkles. In fact, if you were to walk into my kitchen, having not read this yet, you would never know that the dessert was the product of struggle and humiliation.

It's a cake. But that's a miracle, too. Probably the real New Year's Day miracle. Like Jesus' use of a handful of loaves and fish to feed thousands of hungry people, my caring hands and Amy's optimism perpetuated our frosting supply so that our gift to Cindy would be perfect. (Or, if you consider that comparison to be a bit blasphemous... pretend I likened the endless supply of icing to the Hannakuh oil miracle instead.) Either way, we have ourselves a cake. And I have resolved that, to future birthdays, I'll just bring chips and dip.