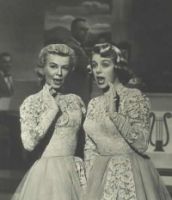 Yesterday we had our little party (and the cake turned out fine). We ate pizza, played games, learned that husbands and wives have a certain advantage when playing Apples to Apples, and opened presents.

While I'm preparing myself to end this all-too-short season of vacation in order to go back to work and then to school, I wanted to end on a positive note. So, in honor of my time with the Ya-Yas yesterday, I give you... the relationship of sisters defined by people much more clever than me.

Having a sister is like having a best friend you can't get rid of. You know whatever you do, they'll still be there. - Amy Li

A sister is a little bit of childhood that can never be lost. - Marion C. Garretty

Is solace anywhere more comforting than in the arms of a sister. - Alice Walker

You can kid the world. But not your sister. - Charlotte Gray

A sister can be seen as someone who is both ourselves and very much not ourselves... a special kind of double. - Toni Morrison

What's the good of news if you haven't a sister to share it? - Jenny DeVries

Sisters is probably the most competitive relationship within the family, but once the sisters are grown, it becomes the strongest relationship. - Margaret Mead

Bless you, my darling, and remember you are always in the heart - oh tucked so close there is no chance of escape - of your sister. - Katherine Mansfield

More than Santa Claus, your sister knows when you've been bad and good. - Linda Sunshine

How do people make it through life without a sister? - Sara Corpening

If your sister is in a tearing hurry to go out and cannot catch your eye, she's wearing your best sweater. - Pam Brown

When sisters stand shoulder to shoulder, who stands a chance against us? - Pam Brown

The mildest, drowsiest sister has been known to turn tiger if her sibling is in trouble. - Clara Ortega

I know some sisters who only see each other on Mother's Day and some who will never speak again. But most are like my sister and me... linked by volatile love, best friends who make other best friends ever so slightly less best. - Patricia Volk

Sisters function as safety nets in a chaotic world simply by being there for each other. - Carol Saline

Sweet is the voice of a sister in the season of sorrow. - Benjamin Disraeli

A sister is a gift to the heart, a friend to the spirit, a golden thread to the meaning of life. - Isadora James

A sibling may be the keeper of one's identity, the only person with the keys to one's unfettered, more fundamental self. - Marian Sandmai

Sibling relationships... outlast marriages, survive the death of parents, resurface after quarrels that would sink any friendship. They flourish in a thousand incarnations of closeness and distance, warmth, loyalty and distrust. - Erica E. Goode

You keep your past by having sisters. As you get older, they're the only ones who don't get bored if you talk about your memories. - Deborah Moggach

She is your mirror, shining back at you with a world of possibilities. She is your witness, who sees you at your worst and best, and loves you anyway. She is your partner in crime, your midnight companion, someone who knows when you are smiling, even in the dark. She is your teacher, your defense attorney, your personal press agent, even your shrink. Some days, she's the reason you wish you were an only child. - Barbara Alpert