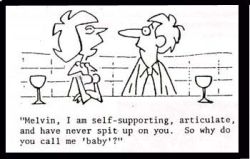 Baby. It was my first word, back when I was a baby myself. But the mere idea of eventually having one of my own (and there will only be one) scares me to distraction. Jon, too. Last week when I was sick and word got out, four different people made the smug, teasing inquiry:
"Morning sickness?" No.

No no. Just plain, old, ordinary, non-pregnant, decades-from-babies sickness. Jon and I were warned as we neared our wedding that, while being thankful that the incessant "So, when are you two gettin' married"s had stopped with the advent of our engagement, our joy would be short lived.

"So, when are you two gonna have a baby?"

Delightful. It hasn't been too bad yet. I am exaggerating. My closest friends do it simply to antagonize me. Jon's closest friends do it... also simply to antagonize me. Jon's folks have left the entire subject alone. My parents promised not to put that pressure on us, but the surface of the subject has definitely been scratched once or twice. The rest of the world population is slowly getting around to posing the question.

After all, it's the logical next step, right? God made man. God made woman. And then He got tired and asked, "So, when are you two gonna have a baby?" God started it; I blame Him.

And it doesn't help that so many people around me have begun procreating like rabbits. My friend Jen Fraser and her husband, Geoff, were the first in my circle. She got married a few months before we did, and in just a couple more she'll have her own little family. A baby boy. It scares me because of how close it hits to home. I don't deny that I'd like to help with her baby shower. Like any other normal young woman I get a soft fuzzy feeling from baby blankets and tiny baby shoes. Making the every day stuff small and pastel evokes the maternal instinct in us all. We have no control.

Jon's cousin Marci had little Mackenzie Joy just before Christmas. We watched Marci's husband, Jake, who'd seemed ripe from boyhood when we'd met him at their wedding the year before, transform into a man, a loving father, seemingly overnight. Amazing and inspiring. But scary, too, because I'm not at all sure I'm ready for Jon to leave the last remnants of boyishness behind in order to become the rock and hero for our future child.

Another of Jon's cousins, David, married his wife Adis last year, too. And last week she had Isabella. Seeing David and Adis at her baby shower a couple months ago was fun because David glowed with love and pride as he gazed at his pregnant wife. I've long heard about the stereotypical aspects of pregnancy (i.e. "the glow"). Adis proved them true. Still, I like fitting into my jeans. I like not having stretchmarks around my middle. Call me shallow, but I'd like to keep myself this size as long as possible. For now at least losing my "cute figure" is too much of an expense to consider.

Okay, that sounded even more shallow than I had originally intended. But I truly believe that there won't be a time that I actually want to gain the weight and blow certain features completely out of proportion. However, that isn't to say that I won't deem such events absolutely necessary and totally worth it when I am mature enough to have kids.

Besides all of these things, I'm not one of those people who can't see beyond nine months or a year when it comes to having children. It isn't about prenancy, really. Motherhood. A role I'm not prepared to take on and conquer. The kid will be around for twenty years at least! Maybe more! Not everyone is blessed with happy, healthy children who skip easily and manageably through life in a predictable and optimal pattern.

After working two summers with children with autism I began to worry that God might be preparing me for the future. I loved the little boys I worked with, but watching what their mothers had to deal with every single day (I got to go home after four hours... and I was fatigued at the end of it!), and watching how they dealt with it hurt my heart. Incredible, devoted women, both of them.

I'm not strong enough. My character is not iron. I couldn't stand watching the little person I loved more than anything in the world, the one I'd helped to create by God's grace, suffer through it each day. Even less imagineable, of course, is the chance of physical defect. When faced with great opposition some people rise to the challenge and become wise and strong, surpassing everyone's expectations. While I like me a lot, I doubt I'd be able to handle that kind of turmoil.

Every day I come into contact with children and their parents. Some are giggling pink babies who coo and smile at strangers, sleep in every kind of surrounding and smell like roses. Some are darling blond toddlers in overalls who want to help and play, are patient and obediant. The rest... minions. All of them. Screaming and ripping, running in frantic circles. Demons of destruction, they never heed their parents, which renders all other authority helpless. I can't stand to watch children like this. What will they become? I shudder to think.

And when they get there, to the dreaded pre-teen years, what do parents do? Once children figure out how to lie and cheat, fork the truth, forge parental signatures, cut class, do drugs, shoplift, commit armed robbery... my poor future-mama mind just spun completely out of control. Pessimism plus the years of knowing kids exactly like that created a tornado in my head. I'm never having kids.

How does anyone make the decision to place their own spawn on this earth? Is it really just pure ego? Push the family name into the future... Raise a productive member of society... Make someone just like me... Oh, God, let it not be so! Even people who are trying to have kids have only really decided they're "ready" to take that step. They want a baby to play with and to bounce on their knee. They DON'T want the disciplinary problems and the expense of preschool, day care, babysitters, extra-curricular activities, injuries, education and the staggering amount of miscellaneous junk that every human being comes to do/want/need/produce.

For some the decision is the easy part. My mom knows so many people who couldn't have children of their own without outside help. It's a terrible thing to watch someone go through. They've done the seesaw process like this, come to the conclusion... but they've happened upon a road block. Some adopt. Some artificially inseminate. Both are extremely expensive options; neither are 100% guaranteed successful.

That also scares me. What if, right now, while we are our most verile and fertile selves, our most energetic, what if we dilly dally and make the mistake of passing the window right by? What if we get to the end of this zigzagging tunnel of logic and counter logic only to find my environment inhospitable? When I end up wanting a child, I'll want him/her right then. No delay (okay, nine months). Occasionally, though, that just isn't in the cards. Punishment? Bad luck? Who can tell?

No, I'm not taking this time to debate having a child now. I'm not through with school, something that is essential to me. I want a career first, something I can call my own and experience in order to have memories and knowledge to carry me through the jobless, raising kids years. And, in certain ways, I'm still a kid myself. I build forts and laugh at knock knock jokes. Jon, too, still likes the occasional cartoon. We have no business trying to raise a person ourselves. Does anyone?
Or is that right ordained by God and given to every man or woman who, wittingly or not, comes to have children? Maybe we really don't have the right until the baby is placed in our arms for the first time. Then we have no other choice but to craft a character, build a self-esteem, plan a future, support a life, strengthen a mind, care for a body, love a child.

Sometime in the next decade, after a few goals have been reached and a few realities have been learned, Jon and I will sit down and make that fateful decision. We'll say we're ready. And then, hopefully, before we can come to our senses, I'll be pregnant. No turning back then. Our path will have been chosen, and God will be smiling.