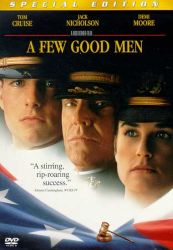 I love this movie.
"Oh that's a relief. I was afraid I wouldn't be able to use the 'liar, liar, pants on fire' defense."
In high school I must have watched it at least a thousand times. And I shared my love for the film with my buddy, Dan Burkhart.
""I strenuously object?" Is that how it works? Hm? "Objection, your Honor!" "Overruled" "No, no. I STRENUOUSLY object." "Oh! You strenuously object. Then I'll take some time and reconsider."
Of course the movie has deeper meaning for me now that my brother is a Marine. Sometimes I wonder... does Ted believe in "the code"? How far would he go if ordered? Are there people out there and above him who would use him in a negative way?

"I run my unit how I run my unit. You want to investigate me, roll the dice and take your chances. I eat breakfast 300 yards from 4000 Cubans who are trained to kill me, so don't think for one second that you can come down here, flash a badge, and make me nervous."

And when you think about it the movie is actually about a few bad men. Rather than ending as a scathing commentary on the Marines in general, 'A Few Good Men' breaks the military down into more specific groups than simply the separate branches. There are those who are "fanatical"; they follow their "code" to the letter, sacrificing their own well-being or trampling on the rights of others in order to keep it.

But on the whole the Marines are individuals with feelings and an understanding of personal rights. And admirably, there are those in the latter category who pity those who are weak enough to believe so blindly. Demi Moore's character feels an intense need to defend the Marines accused of murder because she knows their crime was motivated by the belief that they simply could not question an order. After all, these men fulfill a duty many of us aren't up to.

"They stand on a wall and say, 'Nothing's going to hurt you tonight, not on my watch.'"

While I want to believe that I, if given an immoral order, would tell my "superior officer" exactly what he could do with it, that's something I'll never truly know because I won't ever be in that position. We civilians can't comprehend the gravity of the military and its standards and rules. Looking at the situation the other way I am equally baffled by the superior's role, played perfectly by Jack Nicholson. He gave an order that should not have been followed, but never doubted that it would be followed, and beyond that was perfectly willing to let others beneath him pay for his crime. So I hate him. But he has an answer for me.

"We live in a world that has walls, and those walls have to be guarded by men with guns. Who's gonna do it? You? You, Lieutenant Weinberg? I have a greater responsibility than you can possibly fathom. You weep for Santiago and you curse the marines. You have that luxury. You have the luxury of not knowing what I know: that Santiago's death, while tragic, probably saved lives. And my existence, while grotesque and incomprehensible to you, saves lives. You don't want the truth because, deep down in places you don't talk about at parties, you want me on that wall, you need me on that wall. We use words like honor, code, loyalty. We use these words as the backbone of a life spent defending something. You use them as a punchline. I have neither the time nor the inclination to explain myself to a man who rises and sleeps under the blanket of the very freedom that I provide and then questions the manner in which I provide it. I would rather you just said "thank you" and went on your way. Otherwise I suggest you pick up a weapon and stand at post. Either way, I don't give a damn what you think you are entitled to."

Indeed. A lesson in humanity? Am I giving director Rob Reiner too much credit? His movie has been watched and enjoyed by millions. We praise his casting, his screen play. But isn't it also just a movie? As a matter of fact, "A Few Good Men" was inspired by real events. Reiner and his writers merely gave a famous face to each side of the story. Order sound much more severe coming from an enraged Nicholson. Witty banter conveys a much more realistic introspective journey when delivered by Tom Cruise.

"Is the colonel's underwear a matter of national security?"

I love this movie. It's a thinker. As the end credits roll to the sound of a military marching band, I feel I have been walking the fence, studying the men who abuse the power so completely entrusted to them by those who enlist in the military and take on the quasi-eternal position of a subordinate. Neither are entirely right. But both are entirely necessary. In the end, after Nicholson's character has admitted his role as initiator of the ultimately violent and criminal series of events, he accuses Cruise's character of having weakened the country.

Maybe that's true. Nicholson is right, "deep down in places [I] don't talk about at parties, [I] want him on that wall. I need him on that wall." But more than that I want the assurance that men in power sustain their levels of morality, refusing to sacrifice the principles that elevate us as a forgiving, benevolent nation. There will always be men who stand up and lead. There will likewise always be more men to follow orders and a code. But the difference between a good leader and a bad leader is very slim. Mercy is the deciding factor.

I believe in the importance of mercy, and that it is not to much to ask that of the people we place in positions of authority. Moreover, it is something all human beings ought to work to attain and practice. We'll be the better for it.

"You don't need a patch on your arm to have honor."