It took me a while to process the question a friend posted on Facebook.

Can some of my feminist friends please enlighten me as to why I would offend you by saying that a model in a photograph has a "come & get it" look? 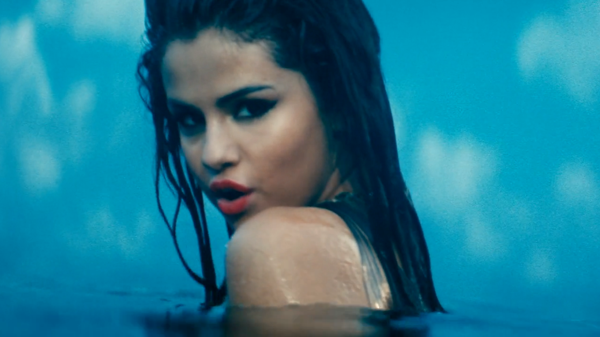 I turned it over and over in my head. The expression "come and get it," even associated with a female fashion model, didn't trigger my disdain or wrath. But it did make me blink. I got that feeling I used to get when fly fishing (poorly). A light resistance, a snag, when my fly caught on a bush behind me or in a clump of reeds on the opposite bank. It passed up the tippet, the line, the rod, and played against my palm. Notice you're stuck , said the feeling. You can unstick me if you're careful and dextrous. Just don't tug too hard or too rashly, otherwise, you'll lose the fly.

The phrase/cliché "come and get it" not only objectifies the woman in question, but places her in a position where she's objectifying herself for her (male) viewers. The phrase is overtly sexual in nature and implies that "it" can be taken from her by the men in question. Given the long history of women being subjugated to positions of sexual property/territory by men in power--at best conquests, and at worst collateral damage--any self-sublimating terminology like this could be seen as insulting. That said, we all know the "come and get it" look. There's a reason it's a cliché. And my brand of feminism includes the expectation that women living empowered lives in first world countries are aware of their own sexuality and how to guard it or wield it as they see fit. I begrudge no woman the right to dress or speak or act in a way that calls a man to "come and get it;" nor do I believe that dressing, speaking, or acting that way relieves men of any responsibility in a sexual transaction. So long as the "come and get it" is an invitation, and the woman casting the glance is capable of consent, I have no problem with it. 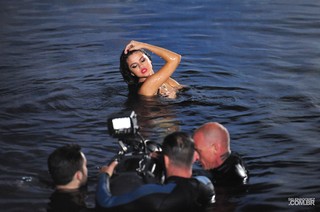 Then again, in this case, we're talking about a model who, for all intents and purposes, is playing a part in front of a camera based on the needs of a client and the instructions of an art director. This artificiality does come into play, too, since the "come and get it" look is being used to trigger something in the viewers--both male and female. If the model is being used to appeal to our baser, less-enlightened sexual instincts and cultural norms, then it can be damaging, particularly to young people. Young women may subconsciously take away that the "come and get it" look is one they are required to cast about in order to interest a man, putting her sexuality ahead of her intellect, humor, ambition, kindness, or myriad other qualities that make her a worthwhile human being. Young men, meanwhile, may subconsciously begin to expect the "come and get it" look from their female counterparts by default, relinquishing any responsibility of their own to earn and/or deserve such a glance from a strong, independent woman. I'm about to have a daughter, and I hope she never winds up on a billboard with a "come and get it" look on her face. (I would hope the same if I were having a son, of course, but given the state of our society, the likelihood is far greater that my daughter will be sexually objectified in this way.) My job is to make certain she grows up understanding herself as a whole person, empowered to set her own boundaries in real relationships, and accepting her own responsibility in any and all sexual transactions, no matter how meta. And, I suppose, it's also my job to help her move through life unaffected by images like the one that started this conversation. If we weren't such good consumers of all that sex sells, it would stop selling.


Perhaps in the end, while I'm not insulted by the phrase "come and get it," I do take issue with the way it is usually used in our society. I do acknowledge that it originated in a time and place where women were used and laid to waste for their sexuality (while simultaneously being shamed for their involvement in this practice, even in their powerlessness). I do acknowledge that it has survived the supposed progress of women learning to trade on their sexuality, when that's all society told them they had to offer. I like the idea of annexing the vocabulary of the oppressors and rebranding it for our own purposes , but that isn't always the answer. Sometimes we just need to consider our own words and remind ourselves where those words began and why we're still using them.

The images I selected for this post are from the music video for Selena Gomez's hit song "Come and Get It." Gomez is 24 years old, though she looks about 14. The lyrics aren't exactly Shakespeare , and are unfortunately lacking in any depth or irony. In other words, the perfect accessory to these musings.