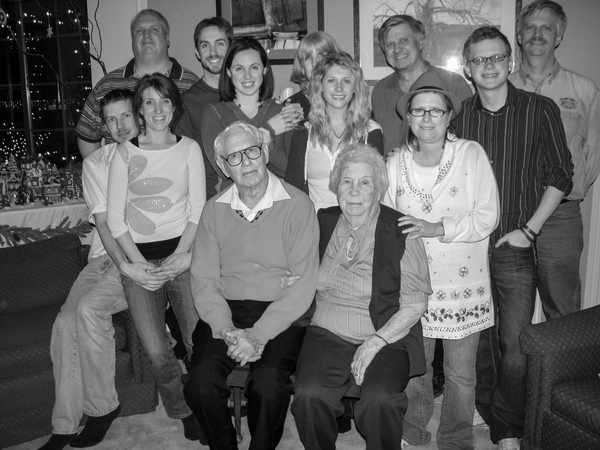 Last week, we lost Jonathan's grandpa, George D. Camp, at the age of 92. Unfortunately, we were unable to fly home to California for the funeral and memorial service, but we did have the chance to send something to be read at the memorial service. Jonathan and I talked for a long time about his relationship with Grandpa Camp, and I used that as an inspiration to write something in Jonathan's voice and from his point of view:

My grandpa's hands were large, squared off at the fingers, and always in motion, whether he was building a new machine, swinging a golf club, or telling a story at my parents' dinner table. He was quick to laugh, and this was indicative of his happiness and fulfillment. After all, he'd accomplished so many of the customary goals of American men: a long, loving marriage, a healthy family, a home he built himself, and a career that provided for his wife and children. By every indication, my grandpa was a simple, old-fashioned man, embodying all the best parts of what have been termed "traditional American values." It would be easy to sum him up this way, but his legacy in my life is far more complex.

Since losing Grandpa Camp, I've been trying to put my finger on what exactly he gave or taught to me, personally. This has been difficult, because I cannot recall specific lessons about the "hot side" of an electrical outlet, or how to mark off the foundation of a house. These practical lessons, along with so many others, I picked up from my dad and his brothers, my Uncle Don and Uncle Gene. These three men--capable and intelligent and fun and generous with their knowledge--shaped me directly into the man, husband, and soon-to-be father I am today; and Grandpa Camp was the genesis of all of that.

Today, many people see only the mystery in things: plumbing, circuitry, a car's engine, the internet. So long as these things work the way they're supposed to, the average person has no interest in understanding the way they work. If a thing breaks, these people call someone like my grandpa. He saw the world through a different, less passive lens. He believed in the inherent logic of the world built around us. This was not an idle curiosity, but rather something active. Not only did he wonder how the mechanics of things functioned, he wanted to pull those things apart and put them back together. And that's exactly what he did throughout his life, a practice that made him both inventive and dependable.

Curiosity is something most of us are born with, but curiosity left unencouraged is almost useless. Grandpa stoked the fire of curiosity in his three sons, and that was passed along to me. Today, when I walk into a room, I see more than four blank walls. I see what is likely behind them. If I'm not certain, I want to know, and I'm willing to pick up my tool box and set to work finding out. I will hammer through the dry wall. I will lift the hood of the car. I will reverse engineer a difficult piece of computer code. This is what Grandpa Camp gave me: Confidence in my own competence.

I hope to instill this same valuable trait of character--this constructive curiosity--in my own daughter and, in this way, to allow Grandpa's legacy to channel down into the next generation.

I grew up without grandparents close by. My Grandpa Ed (Pancoast) died before I was born; my Grandpa Pete (Campagna) lived in Illinois, so I saw him only a handful of times. When I met and married Jonathan, I inherited his grandparents, all four still living and lovable. We spent so many holidays and birthdays with them. I blew out candles on the same cake as Jonathan and Grandpa Camp. The grandpas exchanged war stories at the dinner table; the grandmas debated the best way to wring the neck of a chicken. When Jonathan's Grandpa Wilson passed away at the end of 2012, I realized how close I'd become to these four beautiful people. I consider them my grandparents, too.

My brother-in-law, Josh, recorded the memorial service for us. We watched last night, which made us feel close to the family. Grandpa Camp was a wonderful man of god, a generous human being, a builder, a legend, a good neighbor, a loving husband and father and grandfather. I wish he'd been able to meet his first great-grandchild. Now I'm just hoping the Hazelnut considers arriving a couple of days early so that Jonathan can continue to share his birthday with someone he loves. Either way, we'll always take the time on April 16 to remember Grandpa Camp.