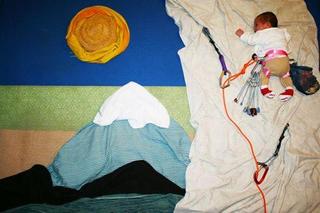 We love to climb. I wonder if she will.

That's not always the way it works. When I was little, my parents played volleyball on weekends with their friends. They trucked my brothers and me out to the elementary school playground and then, after putting up the net, proceeded to ignore us while they had fun.

Heat wavered above the blacktop. The metal slides and chains on the swing set were scorching to the touch. After a while, bored with the games of my little brothers, I'd crawl into a shady spot to read. I couldn't have cared less about volleyball. It was the thing distracting my parents from the pleasure of my company. If anything, I resented the sport for being worth their time.

They wore neon windbreaker shorts and tank tops. For a while, my dad even had a pair of Reebok Pumps. I think. Anyway, they played with two other couples while a boom box blared Mungo Jerry's In the Summertime . They were slick with sweat and red with exertion, and they were having a blast. Between games they stopped to chug water, and we skipped over to be nearer to them. But soon enough, the game would be on again.

If someone shanked the ball, we were called upon to shag it. I hated that, too.

When, a few years later, I prepared to start high school, they suggested I try out for the volleyball team. I scoffed. I choked. I rolled my eyes. I gagged. I grimaced. What a stupid idea. What a beyond stupid idea. The kind parents have. Parents who don't know anything . Ugh. God. Lame.

Volleyball is the sport I love most in the world. Now. I made the JV team that year, not because I was good, but because I was energetic and lean and muscled and extremely coachable. The game was suddenly mine. It was like discovering I had a whole, new, open, ripe part of my brain just waiting to be shocked into animation. Boom. I went on to play for four years in high school, and I coached for two years after that. In college, I was the one playing as often as possible in the bright, hot sun--diving for a rough pass across the grass and bounding back into position--and ignoring everything else in favor of it.

So, maybe it was in my blood the whole time. Even when I was a snaggle-toothed, slender-thighed, freckled little filly, rolling my eyes at my parents and praying for their bright yellow and blue volleyball to pop so we could just, please , go home.

I want volleyball for the Hazelnut. I want rock climbing for her, too. If I could sculpt an existence for her--as a child, a youth, a young woman, an adult--it would include as much time at the crag as possible. Chalk dust. Finger tape. The click of caribiners. A culture of big dreams and health and camaraderie.

We don't get to choose what she loves. We can only model a life that includes time and energy dedicated to something worth loving.

When I remember those endless afternoons on the blacktop now, I realize that's what I was getting, too. Those memories are fond ones. I am nostalgic for the smell of sunscreen and the sound of my parents' laughter echoing across the blacktop.

P.S. Sometimes Jonathan sends me the cutest stuff. He found this photo, probably via Reddit (a forum I loathe, personally). But I can't deny the cuteness of this. And when he takes the time to send such things to me, it reminds me that I picked the right man to be by my side for this task of parenthood. He's present; he's quick to love; he's attuned to cuteness; he will show our daughter how high she can climb.