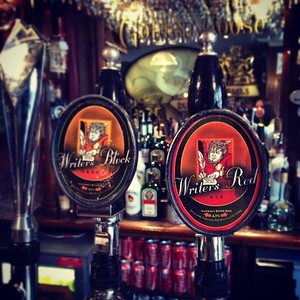 Fate is nothing; fate is everything. I find it hard to believe in chaos, even when that's what whirls and crashes all around me. Probably because I'm a writer. My serendipity sensor is on overdrive. Not only do I notice the details of life--the scent of the roses, the placement of their thorns--but before my eyes, they arrange themselves in patterns. Like crop circles. Like fairy rings.

My trip to Ireland last week was a literary one. It was my reward for winning the Irrgrønn Flash Fiction Award here in Oslo, last March. Three nights in Dublin, courtesy of Tourism Ireland . I was giddy with excitement on the plane, armed with a checklist of bookish things to do in the homeland of Wilde, Joyce, Yeats, Stoker, O'Brien and Enright. Again, what we accomplished (saw, learned, basked in, drank, explored) is far too weighty for one post. Here, I want simply to relate something fun that happened our first evening in the city.

Tourism Ireland put us up at the O'Callaghan Davenport Hotel near Trinity College for three nights. It was a charming hotel that, with the exception of some fairly firm pillows, was comfortable, well-placed for walking around the city center, and included an excellent breakfast each morning. Possibly best about the location was the nearest pub-- The Ginger Man --just across the street.

The Ginger Man is a little bit kitsch, but it's large enough to accommodate a crowd without feeling crowded, the service is quick, and the menu is simple. Jonathan and I stopped by for dinner and some World Cup excitement that first night. Without thinking much about it, I ordered a Guinness, my eyes trained on the TV as we waited for the players to take the field. Jonathan, a more ardent beer lover than I, pondered his options and ordered the Writer's Red.

"Indeed," said he, and lifted his pint to his lips. "Check out the tap."

There behind the bar was the tap for the tasty, American red ale--which ended up with three stars from us on the Untappd app --along with a lighter beer called Writer's Block! I had to get a picture of this, because it's 2014, and recording our every mundane movement is a symptom of our increasingly exhibitionist human condition.

As I snapped it, I heard two women at a nearby table speaking low. "She just took a picture of it," said one. "I wish I'd brought my camera, too," said the other.

And because I'm who I am, I answered, though no one had asked me anything, "I'd be happy to email my photo to you." Americans. Say what you will about us, but we are a friendly bunch.

The woman who wanted the photo was quick to share her email address with me, and after mere seconds, I'd made the acquaintance of children's book author Jeannie Franz Ransom . She was touring Ireland with her sister, and we bonded quickly over our shared passion for writing.

Until that moment, I had not expected to be asked about how or why we were in Ireland. Who would ask? Ireland is a popular tourist destination. Assumptions would be made. And no conversation would likely go deep enough to warrant my bragging. But Ms. Ransom asked, and in that fun little pub, full of color and the roar of the soccer stadium on TV and the smells of bangers and mash from the kitchen, I knew she would appreciate the real answer. So I got a chance to say it aloud to someone who didn't know me, and receive the thrill of her congratulations. And I also knew that, as a fellow writer, she would be inspired by this turn of events, too. Perhaps she will enter a few more competitions because she knows it's possible to win. Perhaps she will encourage other authors she knows to do the same. Ripples in the water.

It's a small thing, but because I'm a writer, these connections never feel random to me, and so I stop and pass my quill between two points, spilling ink in a straight line between them.