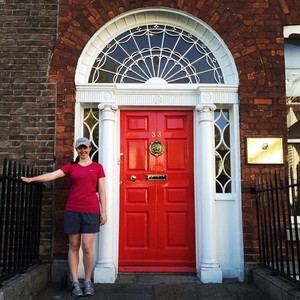 I'm home from a bookish, whiskey-laced, World Cup-ful week in Ireland. There are far too many wonderful bits to blog all at once. Suffice it to say, the trip ticked every box on my Perfect Vacation List. This is a list which has evolved over the years and now includes this shocking item: Finding time and space to go for a run.

You read that right. My on-again-off-again relationship with running is, well, on again.

My shins are fickle. My attachment to my couch profound. My wheezy lungs as good an excuse as any to move at a snail's pace through the majority of my life. But when I run regularly, I do enjoy it. Particularly the bit just after the initial fifteen minutes of hellish breaking-in which my body is bound to undergo every single time... and just before the devastating throb of my lazy heart as The Blerch pops up to tell me I should stop immediately and buy some ice cream instead. If I can drown out The Blerch's protestations with the help of Beyoncé or Ira Glass, I inevitably finish my run glowing (sweating, actually, but glowing just sounds less sticky, slick, and gross), breathing deeply, and proud of myself. Every time. Proof: This photo of me, post-run, posing with my favorite Georgian door in Dublin, number thirty-three, and the same shade of bright red as my poor, little, panting face.

Which is why I've signed up to run the Oslo Half Marathon in September this year, partnered with fellow American expat blogger Corinne to train for the race, and even managed to complete two training runs while on vacation!

When Jonathan and I trained for the Disneyland Half Marathon in 2008 and 2010, we did our final tapered runs in Anaheim the night before the big race. We did the same thing in Death Valley before the 30K we ran in 2009, too. But just plain going for a run while a tourist in a foreign city is something I've never tried before. It almost didn't happen, too, because when I Googled around for advice about jogging in Dublin , I saw the same thing over and over: Don't do it. Running on city streets in Dublin is, apparently, very tough to do. They're crowded. The intersections are terrible. (And if you're not a local, it's easy to forget which way to look when you cross the street, too!) Thankfully, the advice I found went further than that. If you want to run in Dublin, choose one of the many beautiful, safe little parks in the city, and do laps. 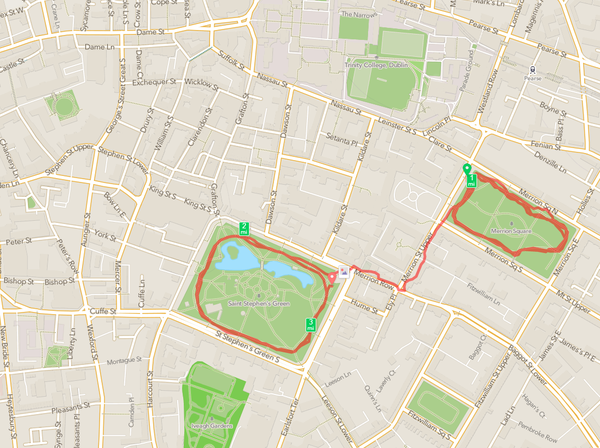 We were staying near Trinity College, so I mapped out a route including the closest park (Merrion Square), then down the street to a slightly larger park (St Stephens Green). Merrion Square's loop is only 1/3 of a mile. St. Stephen's Green is 3/4 of mile. I dragged Jonathan out of bed for this 3-mi run, and our time was pretty terrible (11:40/mi) because it included the distance between the two parks. The sidewalks were so congested, we had to walk it. Oh well.

Both parks are very nice. Merrion Square has the added benefit of being across the street from Oscar Wilde's house. A statue of the infamous wit, nattily dressed and coiffed, reclines on a set of boulders at one of the park's entrances. This little thrill was nice to look forward to on each subsequent lap. 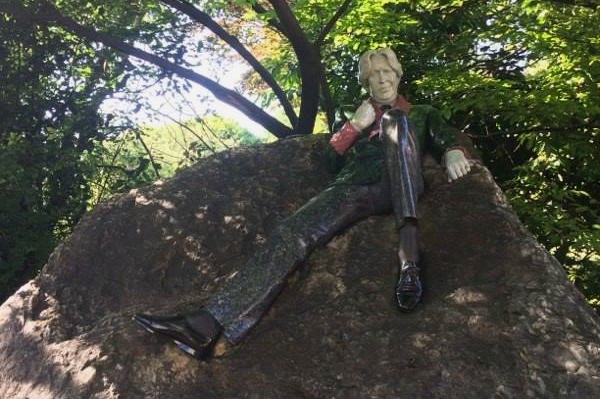 Several days later, after a trip to Killarney National Park and back again, I managed to haul myself out of bed on our final morning in Dublin for my weekly long run. Our hotel was even closer to St. Stephen's Green, so that made it an easy option. Unfortunately, the park didn't open until late morning! Fortunately, running the full block around the park turned out to be simple on a Sunday morning. No streets to cross. Few people to sidestep. 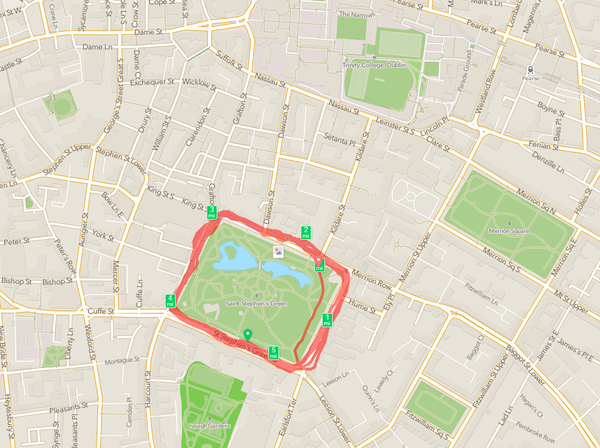 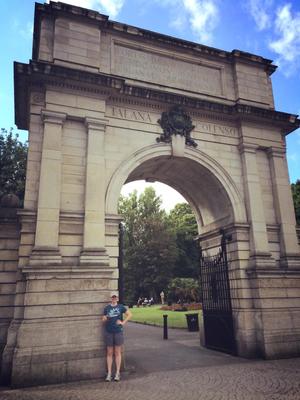 The circumference turned out to be just less than a mile. I ended by entering the park for the last tenth of a mile. There I was greeted by my wonderful husband, who, happy he'd been able to sleep in and skip the torment of a 6-mi run, had picked up a big Starbucks iced tea for me! What a guy. We walked out by way of the arch at the northwestern corner of the park so I could document my run in style.

My average pace was 10:18/mi, and that included a few short breaks. For the first time, the idea of running a whole half marathon at something less than a 12:00/mi pace seemed doable. The party will be thoroughly over this weekend when I return to my long runs at Sognsvann with the indomitable Corinne. I can barely keep up with her. Hills kill me.

The Oslo Half Marathon will be my first race since 2010. My goal is simply to finish. Modest, right? If I can do it in less than two and a half hours, I'll be a very happy (healthy) girl. I welcome any and all encouragement in this endeavor. I've only done one other race without Jonathan at my side. That was the 2009 Mermaid Sprint Triathlon in Santa Cruz, California, and my running time was miserable. Keeping up the pace without my solid-as-a-rock, water-bottle-toting, encouraging-kiss-bestowing dude pulling me along will be double tough. But I've got my fingers crossed for now. And as I travel again later this summer, I look forward to running in a new city. It's a great way to explore!