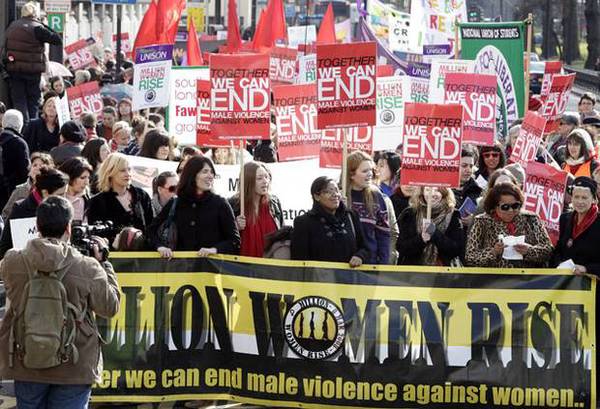 You're either a feminist or you're not; and if you're not, I have no time for you. Today is too important to spend even a moment bickering about the definition of the word, or whether my desire for equal position, equal expectation, equal opportunity, equal pay, equal protection, and equal value in this world might make you and the rest of the non-feminists uncomfortable. You either believe your daughter is worth the same as your son, and can accomplish all the same things, and deserves the same size piece of the world, or you don't. And if you don't, I have no time for you. Your time is over. This is 2014, and we're sick of being statistics, sick of suffering the status quo. You think I'm exaggerating the problem? I'm not. Residual prejudice against our gender affects all women. The threat of violence affects all women. Yes all women.

Because a woman walking home alone at night knows how to carry her keys like a weapon. # yesallwomen

Because women make up more than 50% of the US population, but only 20% of the Senate and only 18% of the House. # yesallwomen

Because I minimize the time I was sexually assaulted, justifying that there was no penetration or skin-on-skin contact. # yesallwomen

Because when you hear the words doctor or lawyer or dentist or cop, you're more likely to think "he" than "she". # yesallwomen

Because a gentleman walks a lady home. This isn't untrue, just sad because it's necessary. # yesallwomen

Because Huck Finn and Tom Sawyer are taught far more than Anne of Green Gables in public schools. # yesallwomen

Because microaggressions add up. # yesallwomen

Because learning how to remove a woman's bra has somehow become canonized as a rite of passage for boys becoming men. # yesallwomen

Because the Church teaches boys about abstinence and girls about "purity". # yesallwomen

Because getting into fistfights defending other kids against bullies in elementary school got me labeled a tomboy. # yesallwomen

Because after I dumped a guy for pressuring me sexually, his MOTHER asked me to give him a second chance. # yesallwomen

Because women aren't allowed on the elder board at my church. # yesallwomen

Because, when I say Clinton, you still think Bill, and this justifies journalists referring to her as Hillary. # yesallwomen

Because the Harry Fallacy (men and women can't be friends) means women expect to be sexual prospects by default. # yesallwomen

Because I automatically smile at strangers on the street, while this never occurs to my husband or brothers. # yesallwomen

Because when I said Yes to preferring a female TSA agent during my pat-down, the guy rolled his eyes. # yesallwomen

Because it even occurs to a teenage boy to ask (let alone pressure) a girl into texting naked photos of herself. # yesallwomen

Because when I once confronted a Neanderthal for catcalling me from his car, he told me I should take it as a compliment. # yesallwomen

Because there's a statute of limitations on rape in the U.S. # yesallwomen

If you're not one of the men causing this problem, you had better be one who tries to solve it, because passivity is complicity. And ladies, we're not off the hook either. The way we respond to our representation in the media--the vilification of single mothers, the slut-shaming of rape victims--matters. The way we communicate sex and love and self-esteem and body image to our daughters will help or hurt this cause.

Tonight, somewhere, a woman in a bar is fending off the unwanted advances of a male stranger. And when all else fails to deter him, she will lie and say, "I have a boyfriend." Because this will work. Because it's more likely he'll have respect for another man's territory than for what she wanted in the first place.

Today, a girl will decide not to put her hair in a ponytail because it could leave her more vulnerable to an attack on the street.

Today, when a journalist covers a story of sexual assault, he or she will question what the victim was wearing. How her makeup was done. Whether she was out too late. Why she was walking alone. Whether she could have done something differently to avoid being attacked. This is the outrage.

Today, a girl will be bullied by a boy in the schoolyard, and someone will tell her that the reason he's treating her this way is that he actually likes her.

All of this is garbage, and all of it needs to be stopped.

My beloved husband does something every day to remind me that it's # notallmen . But # yesallwomen remains necessary.

You're either a feminist or not, and if you're not, that's a shame. But time marches on, and I don't have any of it left for you.