My score is a 9. I put my cold feet on my husband's legs at night to warm them. I never dress for breakfast, nor do I personally put my children to bed. I can't play a musical instrument, and I've never darned a sock in my life. Silly isn't it? But in 1930, these shortcomings would have made me an unequivocal failure as a wife, at least according to Dr. George W. Crane. 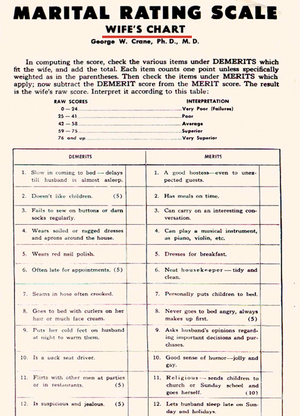 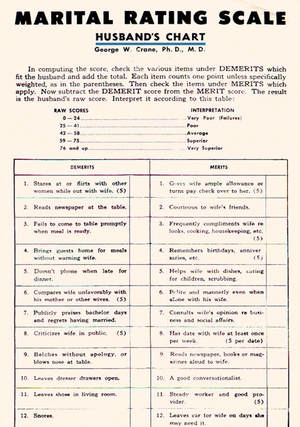 Dr. Crane wanted to know what made a good wife good. He interviewed 600 husbands , asking, "What does your wife do that annoys you?" He then took the 50 most common complaints and created a quiz for couples--conceivably to help improve their marriages. Today, the list is dated to the point of hilarity. Trying to apply the quiz to my modern day marriage is a hoot.

I mean, on one hand, the seams of my hose are never crooked ( merit ). On the other hand, I don't wear hose ( demerit ). I run around bare-legged. Bare-footed, in fact, and my visible toenails are almost always some shade of red ( demerit ).

On one hand, I don't not like children ( merit ). On the other hand, I have elected not to have children, something which wasn't even contemplated by Dr. Crane, because... duh ( demerit ).

On one hand, I do manage to keep my house neat and tidy ( merit ). On the other hand, my personal definition of both neat and tidy are likely different from those of good wives in the 1930s. Ask my dust bunnies; I'm sure they'll back me up on that ( demerit ).

The real bummer is that neither my prowess as a conversationalist ( merit ), nor my willingness to let Jonathan sleep late on Sundays ( merit ) outweigh the ten points I lose for not taking my children to Sunday school ( demerit ). Shoot.

Now, I can laugh at this thing all I want, but I take being a good spouse very seriously. In my world, this means being a constant source of love, encouragement and support to my husband. It means contributing to the family coffers by working hard and earning money. It means giving him gifts, large and small, expected and unexpected, based on the deep, intimate way I know him. Treating him with respect and admiration, both in public and private. Making him laugh as often as possible. Listening to him, even (or especially) when he talks about his work, and doing my best to learn about what he finds important so that I can be a dependable ally.

Jonathan hasn't set foot in a barbershop in more than ten years. Instead, he comes to me. Every eight weeks, I use a safety pin to secure a towel over his shoulders and set to the job at hand. Combing and snipping my way around his ears, the nape of his neck. My fingers slice through his hair like wind through a wheat field. Silver has accumulated at his temples. I am careful. I am better at this now than I was the first time. I am grateful for the warmth and fragrance of his scalp.

This is a small task, and difficult, because I am literally in charge of how my husband looks to the rest of the world. And it's not something I would ever expect (or allow) Jonathan to reciprocate.

I cut his hair ( merit ). And he cleans up the hairy mess when we're finished ( merit ).

Dr. Crane's list of merits and demerits highlights the rut wives found themselves in 80 years ago. It's an exercise in what we now consider an incredible cliche: the wife as a housekeeper and caregiver. Nothing more or less. Meanwhile, the quiz for husbands makes it clear that the rut extended both ways. A good husband's primary responsibility was as the provider. He got extra points for helping with the occasional chore or being solicitous to his wife in public.

These quizzes are silly, especially kept separate like this. There was a time when men and women were expected to fill such distinctively separate roles in marriage. But the fuel of a successful marriage was the same then as it is now: love, affection, security, stability, the practicalities of running a home and, if applicable, raising children. It's just that today, ideally, we divide the tasks of marriage based on personal aptitude and preference rather than gender. If you combine the quizzes and submit them to both parties, I think the scoring would still be accurate and, possibly, helpful.

That way, we both lose points for being late to appointments, criticizing one another in public, or leaving our dresser drawers open. Likewise, we both get points for setting aside time to go on dates together, paying compliments, and consulting one another on important decisions, large purchases, and business affairs. Not because the points matter, but because it's one way to remind us about the things that have annoyed husbands and wives--injuring perfectly sound marriages--since the beginning of time.

Above: Jonathan and me outside Grünerløkka Brygghus, where we celebrated his 35th birthday last month. Marriage is fun.