Norway's policies and attitudes about immigration are increasingly complex. There is a deep, dark bias against certain immigrants--mostly Eastern European, Middle Eastern, and North African--and this is one of several reasons that a more conservative political party came to power during the last election. They are expected to crack down on immigration "abuse". But this same political party has also called for another kind of immigration reform , one which would encourage the immigration of skilled workers.

This led an engineer named Julien Bourrelle to put together a short, illustrated Guide til Nordmenn . He wanted to increase the awareness of the Norwegian government and empoyers when it comes to the needs of these foreign workers. Having been one himself (a Canadian in Norway), Bourrelle knows that socialization in Norway is complicated, not least because the emotions of the Nordmenn can't be taken at face value.

I'd say this drawing is fairly accurate, if only for a moment. It's easy to get the thaw started if you're consistently (or, um, persistently) warm and open yourself. (Or if you begin your relationship with a Norwegian when he or she has been drinking. Just don't expect them to remember what close friends you are the next day...)

Let's get one thing straight: I can count on one hand the "bad" experiences I've had with Norwegians in the last three years. My Norwegian friends are warm and funny, hospitable and helpful. That said, it's true that Norwegians tend to put up a stoic front. They come across as dispassionate, aloof, or removed. This fact is most clearly illustrated in the following scenario: 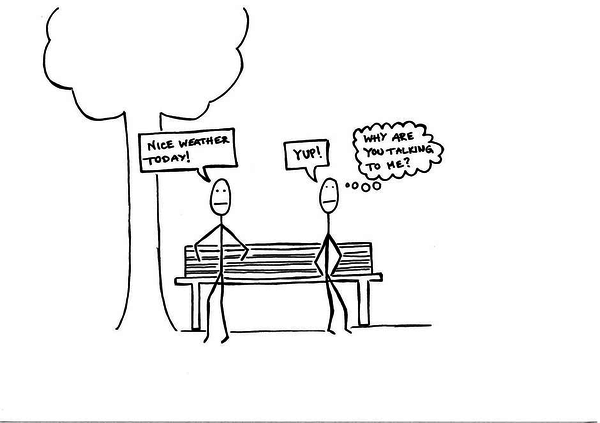 As you can tell from Bourrelle's drawing, it is rare in Norway for strangers to address one another without some pressing cause. For Americans, especially, this is a tough norm to adjust to. Take me, for example. I like to smile at strangers. I like reach out and assist people who are lost or struggling to get their baby's pram up the steps into the trikk. If a girl in front of me on the street has forgotten to remove the tags from her new clothes, I tap her on the shoulder and tell her. If something funny happens while I'm waiting in line at the post office, I like to share the moment with the people around me by cracking a joke. Yeah, when I do these things here, I usually get one response: crickets.

And it's rubbing off on me! A few days ago, I was at the grocery store, checking out. A woman bagging groceries next to me reached out and turned my box of kattsand (kitty litter) to read the label, then (gasp!) asked me a question about it. I had to physically shake my head before answering. So rare is this occasion.

I suspect that Norwegians are probably more proactively friendly with one another, and we can't discount the power of the language barrier. These generous, intelligent people speak fluent English, but it's still not their first language. Conveying emotion can be difficult, even impossible, when you're not communicating in your mother tongue.

I'm not only acting as a Norwegian apologist in this case. It's important for those who want to move here to keep their expectations realistic. As Bourrelle points out, the easiest way to make friends in Norway is to attend group activities, particularly those organized by groups like New to Oslo, the Norway International Network, etc. Don't wait to be invited to a Norwegian's home. It happens, but it might take a while. (And you'll probably need to make the first move.)

The best way to get to know people when you move to a new country is to respect what they hold dear. You don't need to change yourself, at least not entirely. But meet the Norwegians on their own terms, and you'll be find them hospitable enough. It's easy. Eat brown cheese on your waffles. Gå på tur . Laugh at the antics of Ylvis and learn the lyrics to What Does the Fox Say? . Dress up a little for Syttende Mai . Be curious about their history. Don't complain about the 25% Value Added Tax (unless you also have complaints about the benefits that come with it... free education, free medical care, and the like).