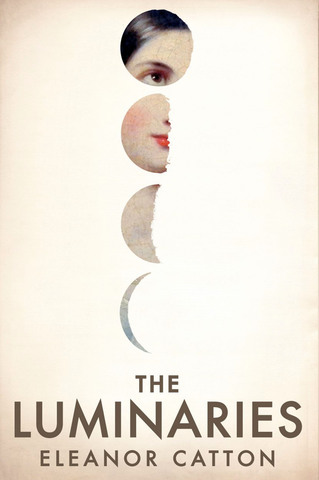 The Luminaries by Eleanor Catton
My rating: 5 of 5 stars

Weighing in at over 800 pages, The Luminaries confounded my expectations over and over again. This is a mystery involving more than a dozen central characters, offered up within the context of historical fiction (the gold rushes in New Zealand in the 1860s). That, and the 2013 Man Booker Prize sticker on its cover, summed up how much I knew about The Luminaries before I began the book last month. I waded in, putting aside my reservations about the volume's heft, because I wanted to know how it had beaten out Jhumpa Lahiri's nomination for the same award (The Lowland). Less than one hundred pages in, I had my answer.

The majority of the characters in this book are male. Every one of them is distinct in physical presentation, personal motivation, and voice. Allowing herself ample time and room to stretch her storylines, Catton made certain that any character she introduced would be essential and, more importantly, memorable. Because the plot is a knot. Because the stars aligned so that these men (and a pair of equally important women) collided, and it is up to the reader to sort things out.


Such sorting is no chore when guided by the steady, confident, divining rod of Eleanor Catton's authorial hand. I was on the edge of my seat for the entire 800 pages. Murder, theft, fraud, exploitation, and blackmail course through the veins of this story, and, impossibly, it never became tedious.

Occasionally I would lift my eyes from the pages and run through the "facts of the case" in my head, ticking off the characters from my interior list, to make sure I was on the right track. But I didn't unravel the knot early, nor did I furrow my brow with fatigue. I wanted to dive back in. There was enough beauty, enough historical information, and enough movement between times and vantage points to keep my interest fresh. There was also enough uniqueness to the individual characters to invite my personal inclination to their stories and subplots, too.

I think that's what impressed me most: the consistency of voice, intrepid and intriguing in the third-person point of view. It never wavers. The narrator is omniscient and discriminating and patient. Catton's descriptions of the gold camps and mining towns reminded me of something I might have read by Dickens or Tolstoy, due to the scope of her vision and her articulation of the details in each scene. She breathed life into the diggers and the opium eaters and the whoremongers and the landlords and the shipping magnates and the sea captains. She underscored the circumstances of indentured Chinese workers, the Maori people, the camp prostitutes, and the convicts. For 800 pages, I lived in a New Zealand mining town, and when I closed the book in the end, I hated to shake the mud from my boots and leave that place behind me.

Here is what The Luminaries wasn't: heavy-handed, cheap, titillating, slow, expected, or easy. Twenty-eight year old Eleanor Catton has my unabashed admiration for imagining and executing this book, one that, had it been written by a man, would have been lifted up as another example of "masculine" literature. Instead, it is evidence of all that literature can accomplish in excellence without any consideration of the author's gender. It is progress manifested. It is an achievement for author and reader alike. I'm proud to own it and, one day, will be eager to read it again.


View all my reviews on Goodreads