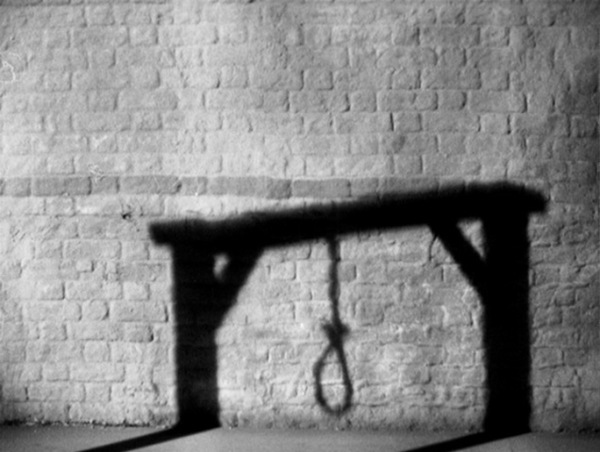 In Oklahoma yesterday, a man named Ronald Clinton Lott was executed by lethal injection. He was convicted of raping and killing two elderly women in 1986 and 1987. He bound them, beat them, raped them, and suffocated them. Two old women who each lived alone. Evil exists in this world, and yesterday in Oklahoma, one evil flame was stamped out by our legal system.

Thankfully, they got the right guy. Ultimately. Another man, Robert Lee Miller, Jr., was originally tried and convicted of these exact crimes. By a jury of his peers. And sentenced to death. Miller spent more than ten years of his life on death row in Oklahoma and, had DNA technology not exonerated him in 1998, might have been the one eating Long John Silver's hush puppies dipped in ketchup a few hours before his last, long walk to the death chamber yesterday.

I wonder if capital punishment is only supported by those people who think they understand the value of human life. Their own. Someone else's. Anyone else's. It will never cease to amaze me how many Christians support the practice of capital punishment. They point to the Old Testament. (Just a fraction of it; the full thing is far too hoary and inconvenient.) It's as if Christians forget that their savior was executed. Unjustly.

Two and a half years ago, a car bomb exploded less than a mile from my home in Oslo. The man* who set it off in front of the Prime Minister's office building, killing 8 people in the blast, proceeded to a small island north of the city and hunted down children at a summer camp. He used automatic weapons to massacre 69 people. Because the PM's political party was too liberal for his taste, too open and too tolerant. This man, a native Norwegian, hated the influx of Muslim immigrants to Norway so much he wanted to kill them.

At the end of that sad, bloody day, this terrorist allowed himself to be taken under arrest. I remember hearing that news and feeling the battle of emotions within me. What would I have preferred? A suicide? That the responding officers had killed the murderer where he stood?

There was never any way that the Norwegian government would kill this man. He knew that. It's his country. They're his laws. His rights. Norway doesn't use the death penalty. Not even in response to the worst civilian crime in the country's entire history.

Watching that smug, slick-haired, quasi-Nazi bastard sit in the courtroom over the next few months was excruciating. Watching him sentenced to a mere 21 years in a Norwegian prison (in a private, three-room suite of a cell, as the New York Times pointed out), the maximum sentence allowed under Norwegian law, made me physically ill.

Is that it?! Twenty-one years? You've got to be kidding me! The man belongs in hell, and it's time for us to send him there. Without further delay. Shoot him. Stab him. Burn him. Drown him. Hang him by the neck from a fucking yardarm. I don't care. But do it and do it fast. He's as guilty as sin. He admits the whole thing. He looked those children in the eye as murdered them. He wished he could have killed more. If we let him out when he's 53, he WILL do it again. The only way to stop him is to reach into his chest and crush his heart, once and for all.

A man can only die once. Even if you use the Old Testament's math, this doesn't work out well. An eye for an eye. The debt to be paid back to make the world "even" again in this case would require seventy-seven sets of eyes. An impossible price.

Also, death isn't the ultimate punishment. Ask any one of the parents who lost children on the island that day in July. Living on after a madman murders your own child is a punishment far worse than death. We know this for certain because parents whose children have been murdered would quickly, gladly have swapped places with their dead children.

Some Bible-believing Christians would argue that, whether we believe death is the ultimate punishment is irrelevant, as vengeance remains to be the Lord's. In most cases, those same folks believe that the flip of the electric chair's switch is the beginning of a criminal's stint in hell. I wonder if they'd be so eager to strap him into the chair if they realized how possible it is that the flip of the switch could simply give him a nice jump start on an eternity in heaven. The Norwegian terrorist claims to be a Christian. If that particular God is, in fact, in His heaven, and if the terrorist in question repents of his sins--no matter how atrocious--and asks for forgiveness, he too will join the heavenly father in paradise. Possibly alongside his victims. Marvelous.

At the end of the day, I understand the desire for revenge. It's one of those basic emotions we feel and act out even as very young children. If you bite me, I'll bite back. It's a defense tactic, proving we are fit enough to survive. Unfortunately, such primitive actions and reactions don't scale well. If you kill my brother, I will kill you. And your brother will kill me. This is where civil wars begin. This is the root of ethnic cleansing. To slap the bee down dead after he stings you gives us the illusion of control.

We are human. We may have been made in the image of the divine, but we are faulty mechanisms, lurching through life, saved only by grace and luck. Not only have we no right to take the life of any human being as punishment, but we are incapable of the kind of certainty required to be sure we don't exact that punishment on the innocent.

What price would you give Robert Lee Miller, Jr. for his ten years of unjust incarceration? How would you indemnify him or his family if he had been executed for a crime he did not commit?

Ten years ago, I supported the death penalty. But justice is one of those things we are offered in a simple package. An eye for an eye. It's catchy. It seems doable, even by our weak, human hands. And if we look at it closer, justice is also one of those things that looks complex, as though we've evolved enough to understand it now. We can pat ourselves on the back and say, Hey, it's not like we're drowning accused witches or anything! We enforce due process here! And due process is complex. Just look at the penal code! This means we're civilized. And once again, justice is neatly packaged for public consumption. It's all right. We're looking out for you.

It's not all right.

Biblically speaking, there used to be a whole list of things for which death was considered the proper punishment. Adultery. Homosexuality. Disrespect of parents. The wrong religious beliefs. Slowly but surely our society has moved away from legislating the execution of individuals based on the color of their skin, or who they sleep with, or whether they call their moms at Christmastime, or whether they light up their windows in mid-winter with a Christmas tree or a Menorah. In fact, we've legislated that these things can't even be held against someone who is applying for a job. This is the evolution of mankind. We are learning how to deal with one another on respectful terms. Which isn't simple.

What IS simple is that those who prove themselves to be dangerous to others must be locked up. But imposing the penalty of death, no matter how much we want it to be, is not part of the human purview.

If you bite me, personally, I will bite you back. No matter how many times anyone thrusts the Bible in my face and tells me Jesus said to turn the other cheek. And if you kill my brother, then find your fate placed in my hands, I will kill you. And your brother will kill me. And so on and so forth ad nauseum. So it goes. Which is why we stopped endorsing vigilantism in the last couple of centuries. And also why we care about conflicts of interest when seating a jury. Because justice, where it exists at all, is not simple, but it definitely works better if we remove the tinge of personal vengeance from the equation entirely.

*The man. The Norwegian terrorist. I will not write his name on my blog. He gets enough of the publicity he craves from the news media.