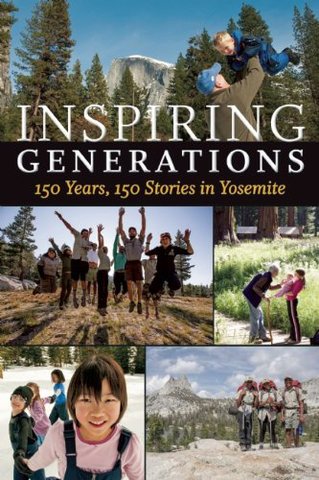 No matter how far I travel from it, my heart belongs to Yosemite. My husband and I grew up there, fell in love there. That's why I'm so proud and excited to announce that my short essay "We Climb Anyway" will be published this winter as part of a new anthology from The Yosemite Conservancy:

"On June 30, 1864, amidst the Civil War, President Abraham Lincoln signed the Yosemite Grant Act to protect Yosemite Valley and Mariposa Grove of Giant Sequoias. This act that set aside the first public parkland for future generations was a legacy for our nation and an inspiration to the world.

"To honor the 150th anniversary of this milestone, a call went out inviting the public to celebrate in prose and poetry the national park they love. The 150 pieces in this book were selected from hundreds of submissions from people who have visited, lived in, or worked in Yosemite National Park. These collected reflections feature, among other things, treks up Half Dome, escapades at The Ahwahnee, revels at the long-gone firefall,and, yes, encounters with those bears; and range from the hilarious to the historical, the enlightening to the uplifting. Inspiring Generations will encourage many journeys to the park filled with family, friends, and the stuff memories are made of."

This commemorative book will be published by the Yosemite Conservancy and will be sold as a fundraising item benefiting the 150th anniversary of the Yosemite Grant.

"One of my passions is hearing from park visitors how Yosemite has impacted their lives in a positive way. This book is a great way to record those experiences and recount how cherished and important the park is to past and present visitors," said Don Neubacher, Yosemite National Park Superintendent.

Every piece in the anthology is less than 1,000 words. Micro-essays and flash fiction. Knowing even that much of my writing will appear in a book for sale in Yosemite National Park is a dream come true.

Inspiring Generations will be available for purchase in YNP bookshops and visitor centers this December. At the Mariposa Storytelling Festival in March 2014, the book will receive an official launch . And you can buy the paperback on Amazon in May 2014 ( preorder it now ).