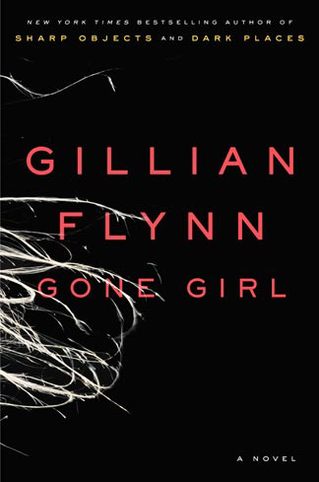 If you're planning a transatlantic flight in the near future and are looking for a book to keep you from going dull-eyed in front of the four-by-six seatback video screen, Gone Girl fits that bill.

Once begun, it was difficult to put down. It stuck there in my hands, sticky the way blood is sticky. Four-hundred sixty-three pages in two days. I expected no less. A dozen people must have recommended this book to me within the last six months.

Ordinarily, I am wary of pop culture phenomena like Gone Girl. Too many people entertained by the same book logically equates to a lower common denominator met. People are unique in their likes and dislikes, curiosities, and tastes in literature. When something appeals across the board, I hold back. Is it The Hunger Games? Is it Twilight? Is it Harry Potter? Is it Fifty Shades of Grey?

At least in regard to the former three titles, I found the reading level to be too young for my taste, and didn't get past the first chapter of the first book in each series. This is not to say they aren't good books. Millions upon millions of people (and book sales) would beg to differ. It's just that they are easy reads. Manageable. Digestible. Entertaining. I assume the same is true of Fifty Shades, with the addition of one important adjective: titillating. All things an eager populace with short attention spans and addictions to the blood spatter of Dexter desire in their books, too.

As it turns out, Gone Girl's popularity is something of a relief to me, in that its foundation is an intelligent, high stakes plot conveyed by expertly-rendered unreliable narrators.

Thrillers aren't usually my thing. I went through a John Grisham-phase in high school, ripped through every book he'd written before 1999, then walked away from it. All that fast-beating-heart exposition--at once rote and required--pages and pages of people drinking coffee, parking cars, eating meals, having sex, moving through life the way everyone moves through life, except that in a thriller, it's done with a pinch of urgency and a shaky cam.

Immediately, Gone Girl bore a twisted resemblance to Fatal Attraction. (Tom Hanks: "Well I saw it! And it scared the shit out of me. It scared the shit out of every man in America!") When Gone Girl is adapted as a film, it will do the same thing. I understand Reese Witherspoon has acquired the rights, which chills me because she's one of two people I imagined in the role of Amy Dunne. The other was January Jones.

But to compare Gone Girl with anything else is unjustly reductionist. The book is striking and memorable for what Gillian Flynn achieves: not two but three distinct, plausible, intriguing voices. I loathed the protagonists, which actually earns Flynn additional points in my world, because even so, I flew through the pages, curled up under a lone lamp in the wee hours. I put off showering to spend more time with petty, wicked people. That implies a powerful draw.

But it is still unlikely that you'll find the book on my shelf the next time you visit. Not only because I happened to borrow this copy, but because the books I keep are books I cherish. They are heavy, personal, resonant tomes. They contained traces of my spirit or enhanced my view of the world. They surprised me. They haunted me. They taught me something of history or presented me with a better perspective on what I believed I already knew. They were essential to my growth as a writer, as a human being. They left me bereft when I turned the final page.

Unfortunately, Gone Girl did none of these things.

Flynn's book is slick and current, a menagerie of post-2008 archetypes born of the global economic crisis. It is a pastiche of an early-aging Generation X. It is a reminder that Feminists made much of their headway only in America's façade--what is spoken aloud, but not necessarily what remains in the hearts of men, nor the way women view themselves or rate the success of their relationships. All important commentary.

Again, I commend Flynn for the fully-fleshed personas of her two narrators, for the nuanced tendons of connection between the primary and secondary characters, and for working richly within an unlikely setting: the suburbs of recession-era Missouri. But to maintain the hold-onto-your-hat pace of this very effective thriller, something needed to be jettisoned. In this case, it was human sympathy and, for lack of a better word, class.

Of the 86,400 words in Gone Girl, I'd estimate that about 5,000 of them are some version of whore, bitch, cunt, or fuck... with bitch predominating. Now, I'm not going to begrudge any author the use of profanity. Sometimes shit does, in fact, get real. But one of the first lessons of fine writing is the purge of redundancy, cutting and culling so that only the best, the most true, the most compelling and effective prose remains. Anything less is lazy. So, while the juxtaposition of these streams of banal expletives with far more complex internal monologues keeps the reader's foot on the gas, it also hints at the possibility that Flynn couldn't communicate the desperation or degradation of her characters any other way.

Still, that's one of those shallow complaints which, except by the severest of goody-two-shoes, shouldn't be held against an otherwise entertaining book.

Worse for me was that, in the unwritten what-comes-next, something which all of my favorite books spark in my imagination, Gone Girl's Nick and Amy Dunne might as well be buried in a graveyard. Even after the harrowing events of over 400 pages, upon closing the book finally, I only felt relief.

Flynn did cast a spotlight on some of the tough, undesirable gray areas of marriage, things we'd rather not acknowledge, particularly in our own relationships. Or, perhaps, particularly in the marriages of others. She also laid bare the ease at which evil might bloom in a heart kept secret. Mold grows in the dark. So do fourteen-foot-long oarfish. So does marital discord.

I will never forget the journey I took with the characters, but beyond the shock value of its unexpected plot twists, the occasional and regrettably realistic betrayals, I am insufficiently moved.

Because I prefer subtlety to hyperbole, and wit to slapstick. Because the reality of Tolstoy's famous declaration that "every unhappy family is unhappy in its own way" packs a significant punch without compounding it with alleged felonies. Or because, two years ago, I picked up Richard Yates's Revolutionary Road, and if I had to guess which book would prevail in the language longer, my money is on Yates's postmodern masterpiece.