Bringing our cats with us from California to Norway wasn't a difficult decision, but it turned out to be an arduous process.

Three years ago, Jonathan was beginning his interviews with the Oslo software company he works for now. It felt like such a long-shot at the time. We didn't tell anybody, didn't research the transition process, didn't do anything remotely practical, actually. (Okay, I subscribed to a YouTube channel to learn Norwegian culture and basic language from this fabulous, funny chick .) But we didn't want to jinx anything, so...

What we ought to have done was look into what it would take to fly two adult cats, both of them on the chunky side, thirteen hours from San Francisco to Oslo. Because it's not simple. And it takes a LOT of time.

So, if you're potentially moving to Norway with your kitty, make sure you start preparing beforehand:

This has to happen before anything else, because all records will be attached to the microchip ID number. In California, we discovered that Pet Food Express hosts a series of public veterinary care clinics offered by VIP PetCare , which was the simplest way to get our kitties chipped and vaccinated.

Norway is a rabies-free country. Maintaining this status is something they take very seriously. No frothing; no biting. So, your kitty needs to be up on all her regular shots, as well as a rabies shot.

Now, to make it more complicated, the rabies shot must be administered a minimum number of days before entry into Norway. Rules are different depending on the country of origin . In our case, Disney and Crypto received their rabies shots in November of 2010 (as soon as possible after we accepted the job offer), then we had to wait 120 days.

Yes, 120 days. Four months. Because Norway also required verification that the rabies vaccine had titrated in our kitties' bloodstreams. Meaning, a second blood test had to take place in March of 2011. AND the blood could only be tested at one of a few approved labs. We paid extra for expedited shipping, testing and results.

(This is why Jonathan moved to Norway ten weeks before I could. The cats and I hung out in our empty California condo. Why empty? Because it takes eight weeks for a shipping container full of furniture to go all transatlantic. Again... this all takes time!) 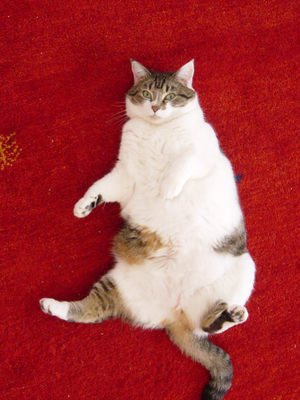 While we waited, Disney, Crypto and I played a little game. I called it:

How Long Will It Take Before They Get TOO Hungry, Notice I'm Forcing Them To Diet, And Turn On Me While I'm Sleeping

The rules were simple. I fed them twice a day, as usual, but in an abbreviated fashion. And I felt terrible about it. But it turned out that the airlines had weight limits for animals traveling on-board. (I was not about to try shipping the kitties as freight because, obviously, they have human feelings, and I kept hearing horror stories about animals who emerged from the cargo hold--how can I put this delicately?-- dead.)

By the day we left, our previously chunky 16-ish pound kitties had slimmed to a svelte pair of roughly 12-pounders. 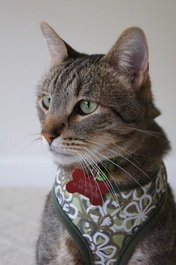 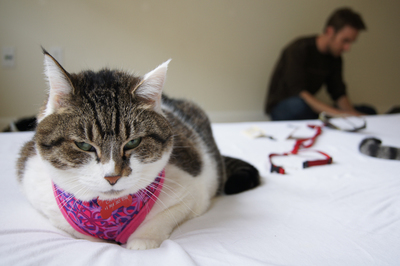 Did you know that animals must be removed from their carriers in order to pass through airport security? Not sure why. I stressed about this moment for weeks beforehand. I mean, Crypto doesn't handle groups larger than two people very well. And Disney is strong and very fast. I kept picturing him wriggling free and racing through the airport, bounding over rolling carry-ons and slaloming between TSA agents... then being caught (because eventually someone would offer to scratch his little head, and he's such a sucker for the love, he'd totally stop), accused of terrorism, and subjected to extraordinary rendition .

We outfitted both of them with sturdy, soft harnesses, collars, licenses. Fun fact: international phone numbers won't fit on any of the traditional cat nametags. We had to use dogbone-shaped tags instead, which made them look like hipster kitties.

When we went through security, Jonathan wore a bulky sweatshirt to protect himself from panicked claws, attached a leash to each harness, and walked them through the metal detector one at a time. Whew! 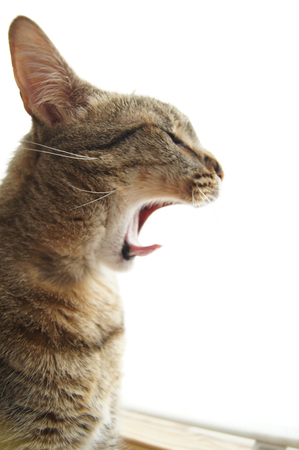 For the sake of our poor, contained animals, we broke our flight into two parts, with an 8+ hour layover in New Jersey. We rested at an airport hotel. It was good to stretch, sleep, eat, drink water, use the disposable litter box. (I mean, I assume this last part was good for them.)

It was also good to have a break from the whining.

Much the way it had been in my nightmares, Disney cried and mewed and mewled and sobbed and begged all the way from San Francisco to New York. I'd read somewhere that it was a good idea to put the kitty carrier under the seat in front of you (okay, that part's required) and cover it with something. I brought a towel for exactly this purpose. Then, like an idiot, about twenty minutes after takeoff, I lifted the blanket to reassure Disney that his mommy hadn't abandoned him in a roaring, soaring metal tube with a bunch of strangers.

As it turns out, he definitely HAD felt abandoned. And I should have left it that way. The minute he saw my face, heard my baby-talking voice, he thought I'd simply forgotten to release him from his cage. And he determined that he would remind me, ceaselessly, for many straight hours. Much to the chagrin of the people sitting around us on the red-eye.

On the second leg of the trip, I didn't lift that towel once. And he slept. Or at least cowered silently under the seat.

At the border, a veterinarian must meet you at customs, scan your cat for the microchip, and validate your paperwork. This wasn't difficult at OSL because, I believe, they had a vet on site.

As we exited the airport with our bags and cat carriers in April of 2011, I breathed easily for the first time in six months. Our katter were frazzled, but fine. AND, because all our furniture was already in the new apartment when we arrived, they nosed their way out of their carriers and into a warm, friendly space full of familiar smells and love. 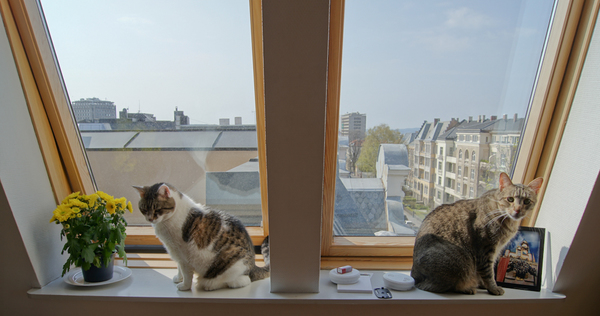 See? It's not that bad. It just takes time.

Before you move with your dog, cat or ferret, triple check the rules with the Norwegian Food Safety Authority .