I recently read an article in the Wall Street Journal by Tom McClintock titled Yosemite National Park: Closed for Preservation , a rant instigated by the following legal action against the National Park Service:

Environmentalist groups such as Friends of Yosemite Valley and Mariposans for the Environment and Responsible Government challenged the National Park Service's 2000 and 2005 plans to manage the Merced River, which runs through the park, claiming that the Park Service was insufficiently preserving the river's "wild and scenic" character. The Ninth Circuit Court of Appeals agreed with the plaintiffs and invalidated the Park Service's plans in 2008. A settlement, agreed to in September 2009, required the Park Service to draft a new plan for the Merced River--and also paid these professional environmental litigants more than $1 million, courtesy of American taxpayers.

As a true Yosemite girl, having climbed the domes and hiked the backcountry, having read Muir's musings on a flat rock in the Merced at dusk, and having married into the surname Camp, I felt the need to respond:

That's idiocy. And it's also the difference between someone who wants national parks to be preserved for generations to come and someone who actually understands what that will take to achieve.

When President Lincoln signed the Yosemite Land Grant in 1864, he designated Yosemite Valley and Mariposa Grove as a protected area "upon the express conditions that the premises shall be held for public use, resort and recreation". But in 1865, Frederick Law Olmsted, a landscape architect who served on the Yosemite board of commissioners, warned that "the slight harm which the few hundred visitors of this year might do, if no care were taken to prevent it, would not be slight, if it should be repeated by millions." This classic conflict between the desire to keep our parks pure and to attract tourists is what pressed President Theordore Roosevelt, after camping in the Yosemite wilderness with John Muir in 1903, to remove control of the valley and grove from California and return it to the federal government. President Lincoln's mid-Civil War desire to set aside a national treasure had been absolutely essential to the process, but it was an incomplete one, and Olmsted's words continue to ring true.

California's population density breaks down to roughly 283 people per square mile. That's pretty crowded. (For the sake of comparison, Norway's population density breaks down to only 35 people per square mile.) The wear and tear of people and their vehicles, not only on the ground, but to the air, the water, the amount of trash and sewage generated and accumulating in the parks, is astonishing, and must be slowed. The most militant environmentalists want it to be stopped altogether. And I don't blame them for that, but I pity them their shortsightedness on another hand. What good is a beautiful thing if no one gets to see it? If it languishes in a secret spot, we run the risk of forgetting it's even there.

Yosemite and Yellowstone and the like are some of my favorite places in the world. I have great childhood memories there, and sharing Yellowstone and Teton with Jonathan for the first time in 2007 ranks up there with the truest pleasures of my adult life. But there's a line we must make and be willing to hold, those of us who claim to admire and uphold Muir's legacy. He wanted Yosemite preserved for the generations to come, but he couldn't have known how large those generations would be, or how much strain we would put on the environment. He couldn't fathom families arriving in enormous gas-guzzling SUVs, using diapers that don't biodegrade, with seven different electronic gadgets, each with its own charger. At sixty, John Muir was still climbing to the tops of 80-foot trees to sit and consider the music of the wind. He couldn't guess that obesity would become an American epidemic, and that his favorite valley trails would be paved over to allow, not just foot and bike traffic, but scooters and electric wheelchairs. He wrote in his journal every day; sang songs robustly as he stomped off into the trees; camped so he could rise and walk directly into the mist of the waterfalls. He never imagined whole families would spend their evenings ensconced in deluxe rooms watching television and checking Facebook.

So, where is the line? 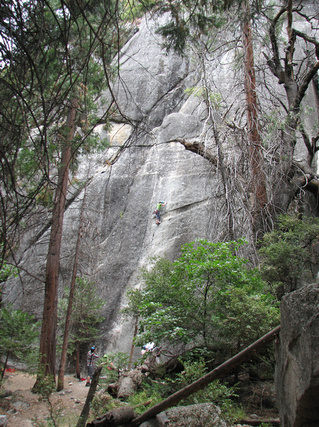 Left: Audrey, in green, climbs at Church Bowl in Yosemite Valley in 2010.

As a climber, I've known people on both ends of the conservationist spectrum when it comes to the sport. Some think it's fine to climb up new, unprotected routes and drill holes in the rock, placing new bolts to make subsequent climbs easy on parties that follow. This "sport climbing" leaves permanent scars in the billion-year-old granite. Okay? Some don't think so. Again, there are those militant conservationists who will actually go out and cut bolts on new routes, rendering them unusable, and undoing the route-setter's work. This is dangerous for a thousand reasons, and I think these people should be stopped. Then, somewhere in the middle, there are those who believe we should allow (and maintain for safety) the existing sport routes in Yosemite, but make all new climbs purely traditional (or "trad"), meaning that the only legal protection should be removable gear. Minimal wear on the mountains. Encouragement of those who desire world class climbing. And a nod to the sport's heritage (which definitely has NOT always been so environmentally conscious.)

My stance on climbing mirrors my stance on this parks-accessibility issue. I don't think Yosemite, or any of the parks, should be as accessible by car as they are. I don't think there should be so many tourist campsites, particularly RV hook-ups, in the valley. I think there should be a maximum number of vehicles allowed into the park at any given time. I think we should refuse to build any more roads into wilderness areas than we already have.

Today, the National Park Service oversees a total of 12,250 miles of trail. The current population of the United States is almost 319,000,000. This means that, if we took everyone in America and lined us up along national park trails, we would each have less than 2.5 inches of trail to ourselves. Two and a half inches?

Now, not everyone in America visits the parks, but we draw in visitors from around the globe. The National Park System receives over 280,000,000 visits each year, and park visitation grew 40 percent between 1980 and 2001. It might seem wrong to turn any of these people away, as their presence proves that they care about the existence of the national parks, but if we don't begin to turn some of them (us, in fact) away, the parks will be overrun.

I do worry that certain parts of Yosemite may be off limits to my children and grandchildren, but that was probably inevitable. Already, parts of the park are off limits to some. You can't hike and camp in the backcountry without a permit. You can't camp in any of the campgrounds without a reservation. You aren't supposed to hike off the trails. You can't hike to the top of Half Dome without a permit (and I believe they will eventually close the trail when the cables are down due to safety concerns). Every year, more people die in accidents around waterfalls. Every year, more people are injured during encounters with wildlife. So, I'm okay with some limitations in my parks. While it warms my heart to know that Jonathan's grandmother can see Lower Yosemite falls by using her wheelchair on a paved trail, I wouldn't want to pave more trails. And while it breaks my heart to know that my dad, an avid outdoorsman, will likely never make it to the top of Half Dome due to physical limitations, I would never move to make that trail easier than it is now. Before the permitting move, up to 3,000 people hiked the Half Dome Trail on summer days. It's hard to believe that the famously bald landmark once had trees at the top, but it's not hard to understand why they were eventually rendered obsolete.

Edward Abbey's Desert Solitaire is the "good book" in our home. (Both my copies are dog-eared and dusty. The covers have completely fallen off. I've read it dozens of times; once entirely aloud to Jonathan.) In it, Abbey, one of the original anarchist environmentalists, long before the legal system had anything to do with preservation, describes his account of living as a park ranger in the canyonlands of southern Utah for a season. For his abiding appreciation of nature's sublime importance, Abbey sits in the company of Muir, Thoreau, Tempest Williams, Houston, and Ehrlich. But he also takes his awe further than any of the rest.

He LOATHES the tourists who cruise through the Utah parks with their windows rolled up and the air conditioning blowing. And he feels they don't deserve access to the primal, preserved beauty of any of America's national parks. They haven't earned it. They've barely pried themselves away from their desks and beds and preschools to see it... for a few seconds, flashing by behind glass.

If you don't agree with Abbey, even a little, before picking up the book, he can come off pompous and self-possessed. But if you can look beyond the petty frailties of his personality (there's a reason it was easy for him to be away from people for such long periods of time), the man gives voice to a wilderness crying out to be saved. He speaks to this exact issue: Is visiting the national parks, America's best idea, the right of every tax-paying American? Or is it the right of every tax-paying American who is willing and able to work a little to see it?

Rip out the swimming pools. Cordon off a couple of valley campgrounds and allow the vegetation to return. Pull rafters from the river. This is the only earth we are given and, unless you believe we're in The End Times, our combined generations are only two of the hundreds to come, and I want there to be something green, living, and untainted left for them to see.

The foreword to Desert Solitaire is one of the most compelling treatises to national park conservancy I've ever read, and it was published in 1968. It ends this way:

Do not jump into your automobile next June and rush out to the canyon country hoping to see some of that which I have attempted to evoke in these pages. In the first place you can't see anything from a car; you've got to get out of the goddamned contraption and walk, better yet crawl, on hands and knees, over the sandstone and through the thornbush and cactus. When traces of blood begin to mark your trail you'll see something, maybe. Probably not. In the second place most of what I write about in this book is already gone or going under fast. This is not a travel guide but an elegy. A memorial. You're holding a tombstone in your hands. A bloody rock. Don't drop it on your foot-throw it at something big and glassy. What do you have to lose?

Jonathan and I want to be able to access every corner of Yosemite, but we're also willing to do what it takes to make that happen, even if it means leaving behind the car. Even if it means walking from the park entrance to the valley. Even if it means sleeping on the ground. Even if it means packing out our own trash. Even if it means forgoing campfires and s'mores. Even if it means no cell reception or email. In fact, if we're honest, that's what we want America's national parks to be there for. Escape. The old fashioned way. Back when Yosemite Valley absolutely was wilderness. 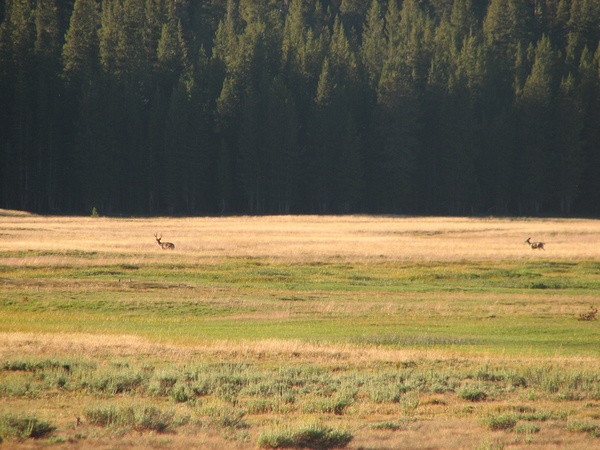