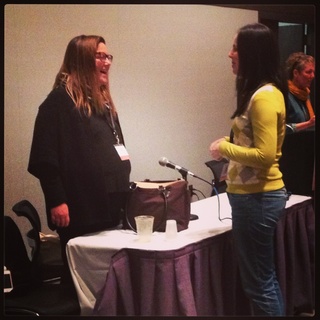 "It is a woman's job to write about the wild."

When I take notes at writing lectures and seminars, I have a system. There are concepts I list, gleaned from the speakers' talking points. There are snippets of dialogue, summaries of observations. If they recommend books, I drop an asterisk. If they recommend authors, I superscript the line with an A. If they say something vital to the rest of my life, as an author and a woman and a human, I make sure to write it down exactly as they spoke it, clutched between quotation marks. Underlined, if it's something I never want to forget.

This weekend, I found myself underlining lots of true quotes, and the best ones came from Pam Houston.

Pam has been my favorite author for many years. One of her fellow professors at UC Davis suggested Cowboys Are My Weakness to me just before I graduated, to pique my creativity. Pam's first book is a dazzling collection of short stories. And when I say dazzling , I mean it more in the sense of sunlight on river rapids than of diamonds. Reading Pam is about excitement, adventure, and the rugged realities of the wild (and of human relationships). Though Pam has long taught Creative Writing at Davis, I never took the opportunity to meet her. Starstruck, I suppose.

I have been able to admire her from afar, though. I read her books as they come out, eagerly, expectantly. When she's featured in a new interview or posts an essay somewhere, I track it down and eat it up. I follow her on both Facebook and Twitter . We've even corresponded via social media a couple of times! But at this year's AWP conference ( Association of Writers and Writing Programs ) in Boston last week, I got a chance to shake her hand! 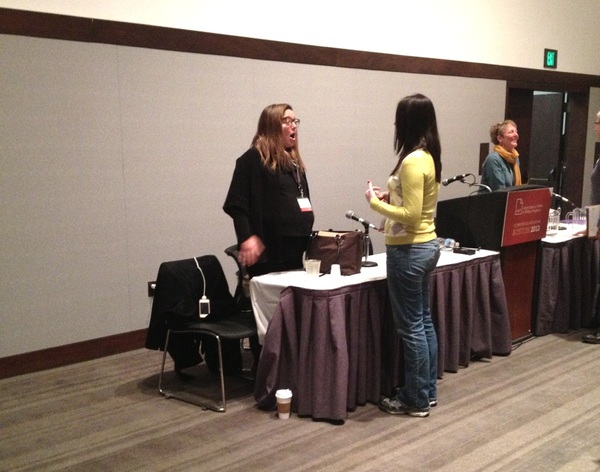 Now, the advent of these photos surprised me as much as it probably worries you. My friend (and writing soul mate), Lacy Arnett Mayberry, sneaked up alongside us and snapped them without my knowledge. That's the kind of friend she is: one willing to be a little creepy just so I could have a memento of this occasion. And I love it!

First, I identified myself as the girl who corresponded with her via Facebook about potentially coming to Norway to do a workshop. To Pam's credit, she remembered that interaction and seemed genuinely enthusiastic about the prospect, as you can see. Since I am naturally loath to invade the privacy of anyone, let alone someone I so admire, it was a relief to receive such a happy, positive response.

When Lacy Instagrammed the first photo , her caption was: Friends at first sight . All I can say is, I wish! But I'm thrilled to have made Pam Houston laugh.

Why? Why is this particular woman's writing so important to me?

The panel she participated on this weekend was called Thoreau's Granddaughters: Women Writing the Wild . The abstract:

Do women approach writing both the wildness of the land and the wilderness of their own bodies differently from men? Do women have a uniquely feminine vision of what it means to be wild? Are they judged by a different set of aesthetics? The panelists, including memoirists, novelists, and poets, will discuss their literary influences, the joys and challenges, and the internal doubts and external criticism they face in writing the wild.

Citing influences like John Muir and Edward Abbey, Terry Tempest Williams and Gretel Ehrlich, the panelists explored what it means to write about the wild, and whether the prerogatives and outcomes differ between men and women.

Pam talked about being a river guide in her youth, leading tourists and rafting enthusiasts down rivers in Colorado and Idaho, and how her approach to guiding (that is, getting the raft and all its occupants safely from one part of the river to another) differed from the strategies of her fellow guides, almost all of whom were male. Her premise was that this could be a good metaphor for the question of wilderness and nature writing.

Where men tended to attack the rapids, Pam "had to let the river help [her] at every opportunity." Because of the disparity in upper-body strength, yes, but also because she felt more like the river's collaborator than its conqueror. My paraphrase.

This is a fascinating concept anyway, but it's not the thing that sets Pam apart in my eyes. The other panelists present, Gretchen Legler and Li Miao, (Cheryl Strayed was delayed by the storms and couldn't make this first of her many AWP appearances), are also excellent writers, as well as active, intuitive women and Feminists. What distinguishes Pam is her willingness to stand alone, even in that environment

In a room full of women expecting to hear some serious Feminist values espoused by highly acclaimed female authors, it is easy for the anti-man landslide to begin. A stone kicked over the cliff by a hiker, intent upon seeing the valley below from a specific angle.

Suddenly men are being painted with a broadly negative brush--accused of leaving their vulgar, primitive marks on the landscape whenever they enter it. Suddenly questions about authorial responsibility to wilderness are matched up entirely with answers pertaining to environmental concerns--climate change and fracking. And because these writers are witty, this breeds laughter, which encourages more of the same.

Pam was the one who stepped out of line to dissent.

"I get worried and a little sick when nature has become all about the ways humans are screwing up," she said. "I want my glaciers to be glaciers on the page."

When asked how she managed to write about the wilderness of her own body, given that women's bodies have been "confiscated" by society--that is, by men--Pam reminded the audience of all the things she has accomplished with her body in the last 50-odd years. She's rafted America's roughest rivers, led hunting expeditions in Alaska and carried the carcasses out on behalf of the hunters. Though she's been physically and sexually assaulted, she remains in control of her relationships. Though she's had a book reviewer call her oversexed and overweight, she retains authority over all her work and stands by the content of what she's written in the past. Just last weekend, she tipped her dogsled on a visit to the Iditarod and managed to hang onto the sled, while being dragged face-down in the snow.

And it was her favorite part of the outing.

"I don't think my body has been confiscated from me," she said, in direct opposition to one of the other panelists.

Do you begin to see from whence my admiration springs? It's about strength, both of body and character. It's about equal parts reverence and irreverence, and knowing when to break out both. It's about living a life worth writing about. And it's about the writing.

Looking for an excerpt from one of her stories to share, I realized my favorite actually is the opening paragraph of the opening story in Cowboys called How to Talk to a Hunter :

"When he says 'Skins or blankets?' it will take you a moment to realized that he's asking which you want to sleep under. And in your hesitation he'll decide that he wants to see your skin wrapped in the big black moose hide. He carried it, he'll say, soaking wet and heavier than a dead man, across the tundra for two--was it hours or days or weeks? But the payoff, now, will be to see it fall across one of your white breasts. It's December, and your skin is never really warm, so you will pull the bulk of it around you and pose for him, pose for his camera, without having to narrate this moose's death."

Then there's this, from The Blood of Fine and Wild Animals , a chapter in A Little More About Me , Pam's memoir:

"I took the bear claw in the palm of my hand and felt the coolness of the silver, and I felt my strong heart pumping, sending blood to every part of my body, including my misshapen arm, and I realized I'd had it wrong all along about the necklace. That I had relied on someone else's set of metaphors to understand it. That it had nothing to do, finally, with an engagement ring or the man who gave it to me, that it had, finally, nothing whatsoever to do with a man. And that whatever role that man had played in taking me to the Alaskan wilderness in the first place, he had nothing to do with why I stayed, nothing to do with all the things my seasons with the hunters, with the animals, had taught me, nothing whatsoever to do with the strength and tenacity that was getting me, bee-stung and frightened and freezing, down that near-dark Alaskan trail."

I've recommended Pam to friends who didn't respond to her work the same way I did, so I won't go so far as to say Every woman in America should own a copy of Cowboys Are My Weakness or A Little More About Me. But I will say that I put Pam in that category of wilderness writers who first made me want to put pen to paper and fanned the flame of my desire to travel and write about the world.