Oslo always tops the list of most expensive cities in the world . So, visitors probably expect to pay a little more for a cup of coffee here. 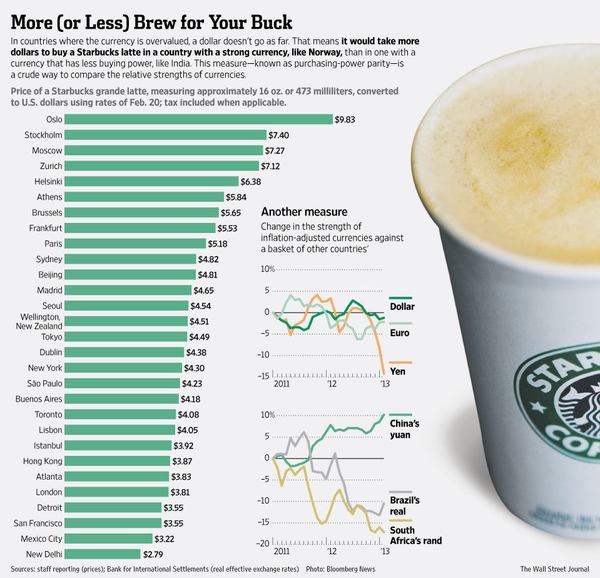 The above info graphic from Bloomberg News illustrates the cost of, specifically, a 16 ounce cup of Starbucks coffee in cities all over the world. It's supposed to demonstrate Purchasing Power Parity (PPP), explained in detail in the Wall Street Journal's piece: On Currencies, What's Fair is Hard to Say .

Before that $9.83 price tag makes you do a spit take, let me point out a couple of the graph's weak points:

So, how much does coffee in Oslo cost?

Jonathan visits our neighborhood cafes for coffee a couple of times each week (a far cry from his twice-a-day Starbucks habit when we lived in California), and that has everything to do with the cost. At Kaffebrenneriet , Åpent Bakeri , or Jonathan's favorite, Mocca Kaffebar , he pays between 39 NOK and 49 NOK for a double mocha. That's $6.80 to $8.60 (based on today's exchange rate). At Oslo's trendy Cafe Fuglen , a double mocha is 42 NOK ($7.37).

Ouch. But as with everything else in Oslo, there's a reason coffee costs so much. When you step up to the counter at an Oslo cafe, the person at the cash register probably makes enough money to live. That's the thing. When you feel like you're paying through the nose, you're contributing to the security of Norwegian society. As the chart above demonstrates, it's easier to swallow this expensive little pill when you're earning the highly valued Norwegian kroner as well as paying with it.