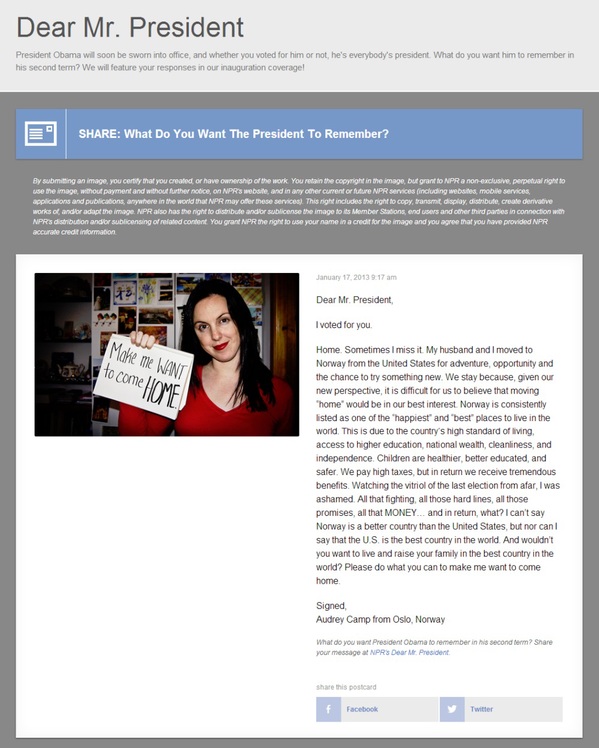 I voted for you.

Home. My husband and I moved to Norway from the United States for adventure, opportunity and the chance to try something new. We stay because, given our new perspective, it is difficult for us to believe that moving "home" would be in our best interest. Norway is consistently listed as one of the "happiest" and "best" places to live in the world. This is due to the country's high standard of living, access to higher education, national wealth, cleanliness, and independence. Children are healthier, better educated, and safer. We pay high taxes, but in return we receive tremendous benefits. Watching the vitriol of the last election from afar, I was ashamed. All that fighting, all those hard lines, all those promises, all that MONEY... and in return, what? I can't say Norway is a better country than the United States, but nor can I say that the U.S. is the best country in the world. And wouldn't you want to live and raise your family in the best country in the world? Please do what you can to make me want to come home.

Four years ago, I was as idealistic as any other 25-year-old. Well, that doesn't mean much. Kids today become so jaded so quickly. Maybe I'll say it this way... Four years ago I was as idealistic as young Senator Barack Obama of Illinois, just before he ascended to the Presidency. The man wanted to bridge gaps, soothe the rancor of Washington, and accomplish lots of important stuff. In 2008, I liked his message, but I didn't vote for him. I believed he was too young and inexperienced to make headway in our white-haired White House, let alone the big, bad world of international relations. He won without my vote. And almost immediately, I was thrilled about that. Even in the face of a GOP machine intent on making him, young Barack Obama, a Democrat, fail in four years, whether or not that hurt our country, the man himself strove to meet his own ideals. Four years later, he earned my vote with guts, humility, and the overall optimism and decency of his party's platform.

I'm no longer a shiny-cheeked idealist, but neither, I'd guess, is President Obama. Yet, he seems to remain optimistic.

But my perspective has changed drastically in those four years, too. I'm older. Have been married longer. Achieved my Master's degree. And, most influential of all, moved overseas. The view from this side of the Atlantic casts new light on several issues.

Health care? Of course there should be some kind of social safety net to catch the less fortunate and cut down on our ER expenses. Birth control? Of course it should be free and available for all men AND women, along with easy access to information on reproductive health and rights. Guns? Of course we should regulate the crap out of things that are designed solely to kill people and animals . Expensive? Of course instating these changes would be expensive, and we'll have to pay higher taxes in order to have them.

And because I'm willing to do that, to pay for a higher quality of life, Jonathan and I live in Norway. Yes, the fjords and mountains and proximity to continental Europe are part of that, too. But America still has its spacious skies, amber waves of grain, and purple mountain majesties above a fruited plain. If we could living within a day's drive of Yosemite again, nothing would beat out that bid for beauty. There's more to life that beauty, though, especially as we get older and our priorities change.

So, I took NPR's offer and sent a postcard to the President . I hope it finds him well. And I further hope that the majority of Americans would get behind the man on issues of principle and decency, things that shouldn't be partisan, and support as many of his actions as possible in the next four years.

The NPR Politics blog made me the covergirl for their Dear Mr. President post (January 16). Even though it doesn't attach to my individual postcard, I think it's pretty exciting. My plea resonated with someone. Or else they just liked my lipstick. Hah!

And then the NPR Politics - Presidential Race page picked it up on January 20. Sweet!