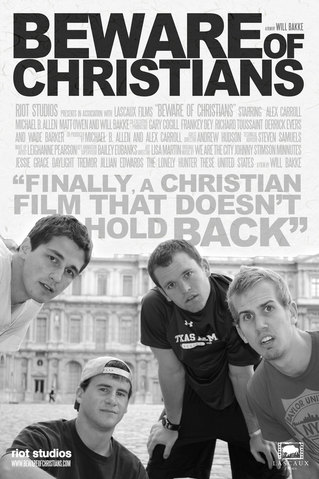 In this 2011 documentary, four American Christian dudes travel all over Europe asking (pretty self-indulgent) questions about (high school level) theology and what it means to really (no, really dude) follow Jesus.

Now, these are four quintessential American-Christian-college guys. I feel like I know them, like I've talked to all of them... in youth groups, church lobbies, Campus Crusade gatherings, youth conferences, Christian concerts. Oh man. It's actually weirder than that. I feel like I was programmed to be able to find these guys in a crowd, to separate them from the herd, to stamp them with the possible-future-mate stamp that all Christian girls are given at birth. Clean cut, hyper masculine, endearingly naive (shallow), bashfully sensitive. Cracking jokes and dealing cliches like cards on the table.

But I'd love to know who said, "Finally, a Christian film that doesn't hold back." Because if these guys aren't holding back, then they've honest-to-God got NOTHING going on behind those beautiful, smiling faces.

Winding their way from London to Barcelona to Rome (by accidental way of Geneva) to Budapest--you get the idea--the guys prompt themselves with the staple topics of any college small group: sex, alcohol, identity, fasting, giving to people in need. At the high point, they actually do GIVE to people in need. At the low point, they happen upon a nude beach (with actual hot people on it!) and decide this is the way God is telling them what to discuss that week.

They can't read maps. They don't know how to ask a question that isn't loaded to the max. Yet I was mildly entertained. I'd guess that most people who spent their high school years grounded in church would find it nostalgic. Even the boys' personal moments, full of revelations about hypocricy and stumbling blocks, are sort of precious.

Oh, did you go watch Superbad with your friends? Shoot. Wait, you have a tough time abstaining from alcohol in college? Gosh. Awww... you had sex before marriage and you feel like that was disrespectful to your future wife? And to the girl you were with? And to yourself? And to JESUS? Bummer dude. Let's "Cross Talk" about that.

What I'm doing right now is a classic example of poor Christian etiquette. When listening to the struggles of a fellow Christian, don't poke fun. That's messed up. But it's tough not to feel a little superior when I'm listening to a guy tell the camera, "As Christian men in college, alcohol is idolized more than anything else in college." Shocking.

Maybe I'm not the target audience. There's seriously a scene, like Jackass Lite, where two of the guys take turns slapping each other as hard as they can. And two other guys set out to sabotage their friend's budding pen pal relationship. It's like the worst kind of reality TV... clean, respectful, and generally harmless.

"If you're truly a Christian, and you're trying to distinguish yourself in this world, life is gonna suck. And you're gonna get made fun of... but it'll be worth it."

While this does sound like a clip straight out of the hilarious parody video Shoot Christians Say , fortunately, or unfortunately (if anyone who isn't already a Christian sees this film and measures the whole flock of us by it), the frat boy in the ballcap, the one who admitted that he "peaked in high school," the one who cried as he closed out his recollections on the trip, is right. Sometimes it sucks. Sometimes you get made fun of. Sometimes real tragedies strike. But it will be worth it.

Or at least that's what Christians believe.