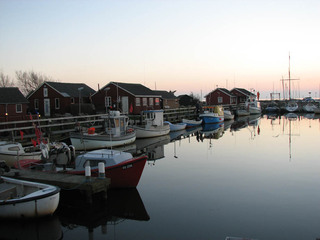 Plans for our first overseas vacation began in early 2007. A couple of friends offered us use of their summer home in Denmark. Understand, I had no real desire to go to Denmark; I'll even admit I wasn't certain of its geographic location at the time. (Somewhere near Finland, right?) But when you don't have a lot of money, you don't say no to free lodging. Period. We accepted.

Then we pulled out the map and I said, "What? Denmark shares a border with Germany? That's awesome. We can drive."

Jonathan agreed to this initial whim for two reasons. First, he was a die-hard United Airlines fan, and their European hub is in Frankfurt. Second, he liked the idea of being on the road in a country known for its beer and battlegrounds. We used our United miles for two Business Class tickets from SFO to FRA, then rented a car.

Unfortunately, no one had thought to take the map away from me in the meantime. I was sitting cross-legged on the floor of our living room saying things like, "Did you know that Germany is right next door to Belgium? Home of amazing chocolate?" and "If we drive straight west from Frankfurt to the Belgian border, we can't really avoid Luxembourg, and Luxembourg is tiny, and I love all tiny things!" and "Oh. My. Gosh. Wouldn't it be fun to make our way north from there through The Netherlands? Windmills! Wooden shoes! Tulips!"

Try as he might, Jonathan couldn't convince me to give up the chance to see all these countries in one swoop. I'd fixated. Even prying the map from my fingers and hiding it didn't stop me. I'd memorized the geography at that point.

"Then we can swing back through northern Germany and across the Danish border, hit the coast for a couple days, and drive across to Copenhagen."

You might be thinking this all sounds a little ambitious or obnoxious. And you're right. But then I want to remind you that I believed this trip was our once-in-a-lifetime chance to see it all. How often do people travel to Europe from California? It's far. It's expensive. To do it right requires an amount of time that's almost impossible to get off of work in any normal career. We had one shot, and I was going to pack it all in.

Jonathan put his foot down when I started looking at train tickets to Paris. We had 10 days. I'd selected 5 countries. That was that.

The first days of our trip, driving through Germany (which remains to be the country we know the least, though we've flown into and through it more times than any other place in Europe), Luxembourg, Belgium, and The Netherlands, were a blur. It was autumn and the leaves in the dense northern European forests were changing. We took photos of the architecture and wandered through outdoor art installments in Luxembourg City.

Navigating the circuitous, chaotic streets of Brussels, where street names change when a street's direction shifts by a mere ten degrees, I tried to keep up with the changes by reading the names off the map, but the French words fell lamely against my husband's uncomprehending ears. We got lost. Tensions mounted. We argued. It was only Day Two.

Eventually, (and probably due more to dumb luck than anything else) we got out of Brussels and back on the open road. Again, the blur was pretty, but we were too jet lagged to care. I'd mumble and point out the window, and Jonathan would mumble and shake his sleepy head. I'm ashamed to say that we ate through our supply of delectable Belgian chocolate quickly, not so much enjoying the flavor as we were using it for its sugar rush.

Because of our late exit from Belgium, we barely had time to exit the vehicle in Holland.

The jet lag finally began to wear off after the night we spent in Hamburg, Germany. We were back on schedule. Jonathan had filled our GPS with geocaches across northern Europe, and we decided to track a couple down. The first took us to an obscure wildlife preserve for owls deep in a forest. It was daytime, so we saw no owls. We pranced around in the mud, avoiding the poison ivy and the barbed holly bushes, and finally found the box and the ledger to sign.

The second cache was just across the Danish border, in a cow pasture, deep down in an old Nazi bunker. During WWII, Denmark had been neutral, and the Nazis used their neutrality to dominate Europe's northern border. I sent Jonathan in to find it because I was afraid of spiders. He emerged holding a green ammo box with the cache ledger inside. As we signed it, a herd of the fuzziest cows we'd ever seen came up and over the hill, their bells ringing in the late afternoon air.

It can't be a coincidence that my fondest and best memories of the trip begin that day. We were just starting to feel like ourselves again. Denmark, the country which had originally been merely the means to an end, welcomed us with beautiful weather, adorable cows, and rolling, golden-green pastureland. Our friend's home in Klegod, with its traditional thatched roof, flag pole, and a walking trail over the dunes to the beach along the North Sea, was a paradise. We lit a fire in the stove and played games, read books, cuddled, and slept.

We only took one day trip: on a frigidly cold day we drove to the original LEGOLAND in Billund. After three days of relaxation, we reluctantly got back in the car to make the 4-hour drive to Copenhagen. I'd avoided planning almost any activities in the city during the months leading up the trip. I knew only that it was the home of Hans Christian Andersen, and I figured we'd get to see the famous mermaid statue in the harbor. Now, newly enamored with the country, I spent the whole drive reading off the possible sights to Jonathan and making plans.

We arrived late at night and found that our hotel was in a fairly seedy area. Adult video stores and sex shops made up most of several blocks in any direction. Parking cost a fortune and was nowhere near our hotel. Like a couple of wide-eyed Midwesterners, we walked along the dark streets, clinging to each other and avoiding the shadows. The Pakistani restaurant where we had dinner was located over a store with a giant neon-red penis blinking in the window. Our waiter ignored us until we walked up and forced him to take our order. They overcharged. It wasn't a good introduction to Copenhagen.

In the light of day, however, we fell in love. Our first stop was at Rundetårn, a round building with a spiral ramp inside wide enough and shallow enough for horse carriages to climb. I'll never forget the view from the top, through a misty fog: red and yellow buildings, tiled roofs, white laundry flapping on the line, and various, intricate steeples poking the sky all across the city.

At Nyhavn, Copenhagen's famously colorful harbor, and a huge tourist trap, we found a geocache. At the Amelienborg Slot (palace), the guard stands were red with little heart-shaped cutouts. At a little underground café (the name of which we cannot remember) Jonathan had a mocha that he still raves about today.

Sunday dawned, and we were brimming with excitement. Our last day in the city! What would we do?!

What we couldn't have known then, because it was our first ever trip to Europe, is that the whole continent closes on Sundays. Very few things remain open. Among them, 7-Elevens. Museums might have some hours, but they're odd and short. We ended up walking across town to the Carlsberg brewery for a tour, an excellent choice both because the tour ended with good beer (probably the best beer in the world) and because there was a replica of the mermaid statue on the premises (we never did see the original).

It was an icy day. All the moisture was still in the air, biting our cheeks and numbing our fingers. We gutted it out, pulled on by the beauty of autumn in Copenhagen's big parks. I danced in the leaves.

Then we had to go. Driving our car onto the ferry that would take us from Copenhagen, across the Baltic Sea, to Germany, we were quiet. It felt wrong to leave without seeing Tivoli or inside any of the palaces. Without having Danish or visiting a history museum or learning anything at all about Vikings. The ferry ride took several hours and was followed by a 7-hour drive back to Frankfurt. I don't remember much about that drive. Exhausted, I would read aloud to Jonathan for a while, and then fall asleep, abandoning him to the open autobahn.

Copenhagen had wowed us. Denmark's west coast had relaxed us. Something about Europe had managed to snag in our hearts. We'd definitely be back. On the plane ride home, we'd already begun planning a trip the following year to Switzerland, and before the reverse jet lag had worn off, we were discussing what it would be like to one day live abroad.

My original posts about this trip:

She love the corridors of Copenhagen!

She loves the dunes in Denmark!

She loves the bricks in Germany!

She loves the cows (lowing) in The Netherlands!

She loves the chocolate in Belgium!

She loves the leaves in Luxembourg!