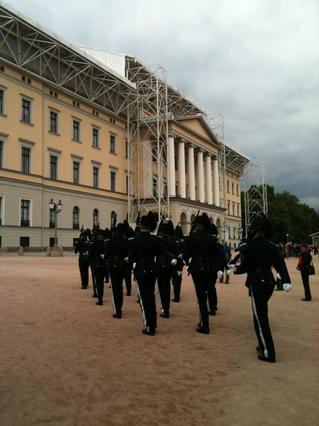 I love falling into the company of pleasant strangers. And because I've got one of those wide-open, trustworthy faces, I've had many opportunities to do exactly that. Not only do I enjoy helping people, but some of the best conversations stem from situations like these.

Standing at the bus stop outside the Folkmuseet on Bygdøy this afternoon, I was approached by two elderly ladies. They carried cameras and backpacks. One of them seemed to be playing a folding map like an accordion. They asked whether they were standing on the correct side of the road to catch the number 30 bus back into town. I said they were.

"So, we'll go that way then," one said, gesturing off to her left.

"No, the bus will take you this way. Back into town."

"Oh Elaine, you're forgetting the sides of the road again!" Elaine's friend teased.

"It's true. We're from England," Elaine explained. "I forget about the roads."

Both women appeared to be in their sixties*. Elaine was shorter, with dark hair still ebbing gray; her blue eyes watered against the brightness as the sun pushed out from behind the clouds. Her friend was tall and wore glasses that darkened in the sunlight; her hair was nearly white. Both of them had soft, slackened cheeks and hands speckled with liver spots, but in many other ways, they were night and day. Elaine peered out the bus windows with big eyes, loving every minute of the city. Her friend said she preferred countryside. Elaine named waypoints on our bus ride, obviously in some command of her location. Her friend clucked her tongue and admitted, "I'm absolutely no use when it comes to directions."

After a short discussion, I offered to ride with them into town and direct them to the harbor. When I learned they had yet to see the palace, and were confused about how to get there, I disembarked with them at Slottsparken and led the way up the hill.

"The palace is just up this way."

"Here on the left is my favorite statue on the grounds. Queen Maud ."

"Princess Maud! She's one of ours, you know."

"You know if they wipe all of ours out, we get Norway's king as our own."

"Unfortunately, there's too many of ours to wipe out at this point."

"Did you say your name was Elaine?"

"Yes. One of my first favorite novels was Cold Sassy Tree by Olive Ann Burns."

"It's a family name. My aunt's and my grandmother's."

"And I was named after Elaine of Mort Artu . You know. The Lady of Shalott."

"This is quite the literary conversation we're having!"

"So I've heard. I was named after Hepburn."

"I think it's the changing of the guard!"

"It's an awfully tame changing of the guard. Compared to ours, I mean."

"Did you read, dear, that they've had to move them inside?"

"Our guards. Tourists kept poking at them and harassing them. Trying to make them talk."

"Here, the guards can talk."

"Ours aren't even allowed to smile."

"They're just babies. Just baby boys, most of them."

"Remember, though, that almost everyone looks young to us!"

"We never would have seen this if it weren't for you."

"You're welcome. I've lived here a year, and I hadn't seen the changing of the guard yet, either."

"Well then. It's your reward for doing a good deed."

"My pleasure. I've got to run. Have a fun trip to Copenhagen!"

"Thanks! And you enjoy your life here!"

*Previously, I'd indicated that Olive and Elaine "appeared to be in their seventies." I've been corrected! And that's way too much fun. Thank you for tracking me down, Elaine. It's a fond memory for me, too.