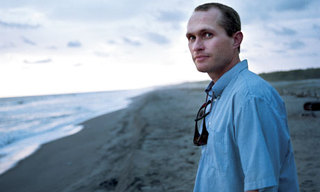 While the Opera House was drowning in the agitated mania of Oslo's teenage Justin Bieber fans last Wednesday night, a few dozen literature lovers gathered in the basement of Oslo's Litteraturhuset to see someone else. David Vann , author of Legend of a Suicide and Caribou Island , was visiting to talk about the latter book, most recently translated into Norwegian.

Turning the last page of Caribou Island the week before, I'd felt utterly flattened, almost distraught. The story follows the crumbling of a thirty-year marriage. Gary and Irene are building a cabin on an island in Alaska; as they struggle through that process, they learn how far apart they've grown and how much they have left to lose. It is one of the saddest, least hopeful books I've ever read. That the novel elicited such a strong reaction speaks to the high quality of the writing, but ultimately, I was feeling dark and wary as I took my seat on Wednesday. I had no idea what to expect.

So, it was a pleasant surprise when Vann took the floor and opened with his Bieber impersonation for the audience.

He stepped away from the chair and microphone set up for the interview and took a pop artist's stance, as though on stage: one foot in front of the other, torso leaned forward. He then proceeded to rock out.

"Dead on, right?" he asked. The audience laughed. Vann reddened and returned to his seat.

Norwegian journalist Martin Grüner Larsen led the interview and first brought up Legend of a Suicide .

"Why did you choose to write it as a novel? Why not a memoir?" Larsen asked.

Legend of a Suicide , winner of the 2007 Grace Paley Prize for Short Fiction, is the fractured tale of a man's suicide as told several different ways. Every version is slightly different, a variety of vantage points and writing styles. But the suicide in the story was real. Vann's father took his own life in 1980; that heartbreak for Vann was the jumping off point for what would eventually be a successful literary debut. Vann doesn't hide this fact from his readers; the American edition includes a note confirming it on the inside cover.

"There's no true story in my family," Vann explained. When asked, every family member had something different to say or add about his father's death. For Vann, the only answer was to give his unconscious a free reign in the writing.

"To make the ugly and meaningless beautiful and meaningful is what the unconscious wants," he said. "My family doesn't understand why the beautiful has to be monstrous; [but Legend of a Suicide] is some monstrous version of the true story."

Vann began writing Legend of a Suicide when he was still a student in a writing program. The manuscript was rejected by several publishers. Ultimately, a discouraged Vann gave up and pursued a career as a sailing captain and a boat builder.

"My brain wasn't old enough to do a novel," he said. Only several years later did he return to his original project and find success.

Larsen asked whether writing Legend of a Suicide was something akin to therapy.

"But the difference between writing and therapy is that writing has an aesthetic goal... transformation, trying to find something beautiful," he said. Then he continued, "Therapy isn't beautiful."

Thus, the tone of the evening was set. Vann couldn't help vying for the laugh at every turn. He giggled through many of his own quips, gesticulating with frantic hands, rolling his eyes around in his head.
"I have no idea what I'm doing!" he said repeatedly. "I'm prone to disaster!"

At one point, he shared that he had managed to sink his sailboat in the middle of the Caribbean while on his honeymoon. "We lost everything!" he guffawed. The audience chuckled, too, but checked themselves. In a roomful of reserved Norwegians, it's easy to spot the American clown. Nip-tucking for a laugh. Oversharing and oblivious. I've done it, too.

The irony in this is that Vann is quick to distance himself from his fellow Americans by unabashedly airing his grievances about his home country.

"It's a nation of Giant Lies," he said. His eyes glittered. His mouth shaped itself into a smugly apologetic smile. "Tens of millions of people [in the U.S.], maybe even 100 million, believe these lies: that America is a force for good in the world; that we're good environmental citizens; that our military is keeping us safe."

What had begun as an interview about writing devolved quickly into a bizarre political platform for Vann. To the interviewer's credit, he tried to keep Vann on track. Referencing the themes of isolation and hopelessness that run through Caribou Island , Larsen asked, "Do you think of your novels as tragedies?"

"Yeah, I really do," said Vann. "In the Greek tradition of tragedy, as the characters fall apart, we think about ourselves."

He went on to say that, with each novel he writes, he draws closer to the pure tradition of Greek Tragedy, though he insists this move is unintentional.

"Everything is so unconscious. That would be a terrible marketing strategy--taking your work closer and closer to Greek Tragedy. Especially in America," he said. "But no one reads me there anyway."

Larsen asked whether Vann would classify Caribou Island as an anti-American novel.

"Yes. I fit in an American [literary] tradition that I'm proud of, but that tradition [has often been] critical of America," said Vann. Here he listed a few of his strongest literary influences, among them Faulkner, Melville, and O'Connor.

It's hard not to be critical, Vann pointed out. "When you watch things like the GOP debates [during the Republican presidential primary]. It's like a bunch of talking heads in fantasyland."

"It reminded me of Dr. Strangelove," agreed Larsen.

Unfortunately, Larsen's accord appeared to unleash something in Vann, as though the cap had been removed from a bottle of roughly shaken soda. Out came Vann's diatribe against the typical characteristics of a clichéd American public.

"Americans actually believe corporations are out to do us good!"

"Americans believe having guns keeps you safe, despite all evidence to the contrary." He described a string a shootings in Chicago over a single weekend in early 2009. "But it wasn't news. It was spring in Chicago. It gets warm and people go out and shoot at each other. It's like a sport."

That year, Vann authored Last Day on Earth: A Portrait of the NIU School Shooter , a nonfiction work which required an enormous amount of research. As Wednesday night's conversation veered toward violence, the topic of Anders Behring Breivik, the mastermind behind Oslo's two terror attacks on 22 July 2011, was probably inevitable.

"What advice would you give to Norway?" asked Larsen, sincerely interested in what a gun violence expert would have to say about Norway's most violent tragedy.

"What [Breivik] thinks and feels is disgusting--he shouldn't get so much face-time," Vann answered. Around the room, people were nodding. "His logic appeals to those with mental illness. Paranoid politics. You can't speak in a reasonable way to people who will respond to these views."

I wished he'd stop there. But instead, Vann lapsed into another rambling tirade about the shortcomings of America. With each assertion, I cringed.

"I know what advice I'd give to the U.S.," he said. "Stop fearing the Left. All [the mass shootings in our history] have come from the Right."

"Libertarianism is a political philosophy which puts the needs of the individual above the needs of the group every time. That's the mindset of all mass murderers, too. It's dangerous, and we shouldn't be so tolerant of it."

"If I were President, I'd say, 'First, we're going to have a frank discussion about all our Big Lies. Then tomorrow I'm gonna cut the military budget in half, and next year we'll cut it in half again. And it's all gonna be okay.' I don't know why nobody has done that yet."

There's no arguing that it takes leaving one's own country to attain a valuable, possibly even more accurate perspective on one's home. Distance reveals so much. But while David Vann opined about the stupidity of the average American, I was struck by a far greater irony.

"I really shouldn't be talking politics here," he admitted. "It's not my field. I'm a dummy when it comes to politics."

An American... taking every issue to a hyper-political level, ridiculing his opponents and claiming to have quick solutions, willing to use the phrase "If I were President" while admitting he's a political dummy in the same breath? What's more cliché than that?

I didn't bother to stay for the signing. As I pushed through the doors and out into the chilly May evening, a handful of people were eagerly buying Norwegian copies of Vann's books in the bookstore behind me. Sunlight spilled down the street. I tried to remember the Bieber dance moves, or some of the wise things Vann had said about the role of landscape in his writing. But it was tough. All I could recall was a line from the Ron Padgett poem How to be Perfect :

Forgive your country every once in a while. If that is not possible, go to another one.